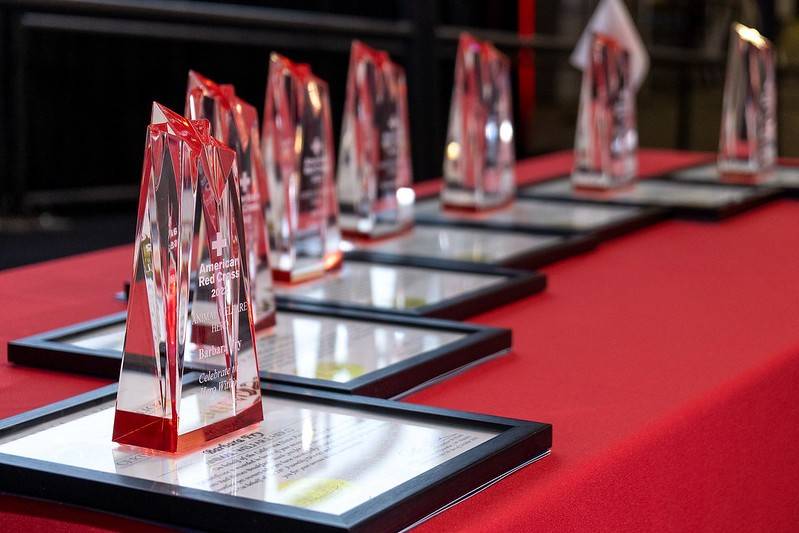 SAN DIEGO – October 10, 2022 – A lifesaving Sailor and Coast Guardsman. A local “pet detective” reuniting lost pets with their owners. A 1,000+ unit platelet donor. A 12-year-old junior diabetes advocate helping others living with diabetes. Last week, the American Red Cross of San Diego and Imperial Counties honored these heroes and others at the 20th Annual Real Heroes Awards aboard the USS Midway Museum.

“We were thrilled to recognize outstanding local heroes who have acted with bravery, compassion and extraordinary courage,” said Sean Mahoney, Regional CEO of the American Red Cross of San Diego and Imperial Counties.

Gift of Life Hero: Alan Lewis (Escondido, Calif.)
Alan Lewis, a U.S. Navy veteran and Escondido resident, donated blood for the first time in February 1999. 22 years later, Lewis recently reached an important milestone – his 1,000th platelet unit donation. His competitive spirit and desire to help hospital patients in need is shown through his commitment to regularly rolling up his sleeves to donate, including his biweekly triple-unit platelet donations. Lewis’ donations have brought help and hope to patients near and far. His platelet donations have been delivered to hospitals as close as La Jolla and as far as Guam. Over the past 22 years, Lewis has helped potentially save thousands of lives.

On the morning of May 2, 2021, AWS1 Cale Foy was on a trail walk with his wife and children at the Cabrillo National Monument in Point Loma when he observed a boat that had crashed offshore, with dozens of people in need of help. Rough seas presented dangerous and unforgiving conditions, but he jumped into action, using his Naval rescue training and working with another good Samaritan to identify people in the water who needed help, then swimming out to them getting them to safety. Foy ultimately saved four lives thanks to his selfless and heroic actions.

On January 19, 2021, Coast Guard Sector San Diego received a report of a disabled migrant vessel adrift 108 nautical miles northwest of San Diego. AST1 Joshua Carlson and his crew navigated to the 30-foot vessel, with 21 survivors onboard in immediate peril. Carlson jumped into the rough seas, swam to the vessel, and triaged and critically assessed all members, who were suffering from hypothermia and needed expedited medical evacuation. Over a period of 90 minutes, Carlson swam back and forth to the vessel through 12-foot seas. One by one, he assisted survivors into the water and lifted them into his crew’s helicopter rescue basket. Through his heroic efforts, Carlson endured taxing conditions and ultimately saved nine lives.

12-year-old Bianca Villalobos is a Girl Scout, volunteer, pageant queen and Youth Ambassador for the Juvenile Diabetes Research Foundation and American Diabetes Association. She also dedicates time to volunteering with her church and at the Veterans of Foreign Wars post, where she retires the flag and serves meals to veterans. Villalobos frequently donates to causes she supports, whether it’s by bringing books to Little Free Libraries or insulin doses to the nonprofit Insulin for Life. Through all her charitable activities, Villalobos strives to bring greater awareness and understanding of Type 1 diabetes to the public while making a positive difference in the community.

On November 22, 2021, Port of San Diego Harbor Police Officer Janel Seney observed a vehicle stopped on active train tracks, with an unconscious male in the driver’s seat. Officer Seney instructed dispatch to hold all train traffic and used her baton to gain access into the vehicle. Officer Seney and a good Samaritan extracted the driver from the vehicle. The driver was in medical distress and did not have a pulse. Officer Seney performed CPR until additional first responders arrived and successfully used an AED on the driver. The driver began breathing on his own and was transported to a local hospital, where he survived, thanks to the heroic actions of Officer Seney.

Sycuan Casino Resort has been a long-standing partner of the American Red Cross. Sycuan supports the Red Cross mission through their philanthropic giving, and supports local disaster preparedness and response efforts, allowing the Red Cross of San Diego and Imperial Counties to place a Disaster Response Trailer on the Sycuan Tribal Reservation and incorporating the local Red Cross into their annual Safety Expo. Through their Sycuan Cares initiative, Sycuan serves as a dedicated partner to numerous local charities as well, donating over 1 million dollars in support of the community.

Every year, the Real Heroes Awards honors ordinary people with extraordinary courage. Nominations are submitted by the public and are chosen by a selection committee based on the extent to which nominees embody the spirit and mission of the Red Cross. Real Heroes nominations are accepted year-round in the following categories:

The Real Heroes Awards is one of the largest fundraising events for the local Red Cross and this year’s event raised over $141,000 for the organization. This year’s event was made possible thanks to generous sponsors including: Hometown Hero sponsors San Diego Gas & Electric and Quanta West, LLC, co-presenting sponsors San Diego State University, Sycuan Casino Resort and U.S. Bank, along with numerous other sponsors at the Regional, Community and Neighborhood Sponsor levels.

For more information or to nominate a hero, visit redcross.org/sandiego/realheroes.