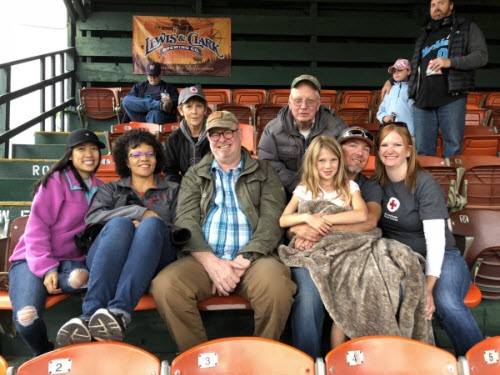 With her kids off to college, Cindy Bender found herself with more time on her hands, time she wanted to use to help those around her. She signed up to become an American Red Cross volunteer in 2004, and not long after, Bender and four others from Montana deployed to Pensacola, Fla., to help with an emergency shelter after several major hurricanes hit the state including hurricanes Charley, Frances, Ivan and Jeanne. It would be the first of several Red Cross hurricane deployments for Bender.

That initial experience helping people in Pensacola spurred the Helena woman to join her local disaster action team. She eventually became chairman before stepping back to a team lead position so she could work more directly with people. Deployments following Hurricanes Ike and Katrina have shaped her personally, Bender said, with the people she served teaching her “how to be a better person.” She also drew inspiration by watching these families keep their heads up and looking forward during such difficult times.

A few Red Cross experiences through the years have stuck with her, like the time a shelter in Louisiana was struggling and Bender and others were called upon to get it up and running again.

There was also the time a Dollar Store in Poplarville, Miss., had been shuttered following a hurricane, and the owner gave local disaster emergency services teams and Red Cross volunteers permission to go in and take everything they needed to help residents. As they were gathering supplies, several police cars pulled up. The officers thought Bender and the others were looters and almost arrested them until they realized they had permission to be there.

But amidst all these adventures, it’s the people she’s met during these deployments Bender remembers most. They include complete strangers who helped her run a shelter and soon became lifelong friends. She fondly remembers the professionalism of the fire departments, police officers and FEMA workers who always showed gratitude toward the Red Cross. And it’s the people she’s helped, including the 78-year-old woman who wrote her a beautiful thank you letter full of hope and promise after she lost everything she owned.

Besides her hurricane deployments, Bender also helps families closer to home. During the flooding in Montana this spring, Bender worked closely with other organizations through the Montana chapter of the Volunteer Organizations Active in Disasters. They met regularly to discuss community needs and then divided up the responses based on strengths of each organization.

One organization provided sandbags, for example, another drywall and another masks and gloves. Bender said she’s especially thankful for Ted Koenig, a Red Cross disaster program manager, who was on the phone during those flooding meetings and is “always on speed dial” to respond to questions.

Koenig is also grateful for Bender and her positive attitude during difficult times.

“There are many things that make Cindy a great volunteer, but the ones that come most to mind are her selflessness and enthusiasm,” he said. “She does each of these things with a contagious enthusiasm that lifts the spirits of our clients, our partners and her peers.”

That’s just part of being on a great team, Bender said.