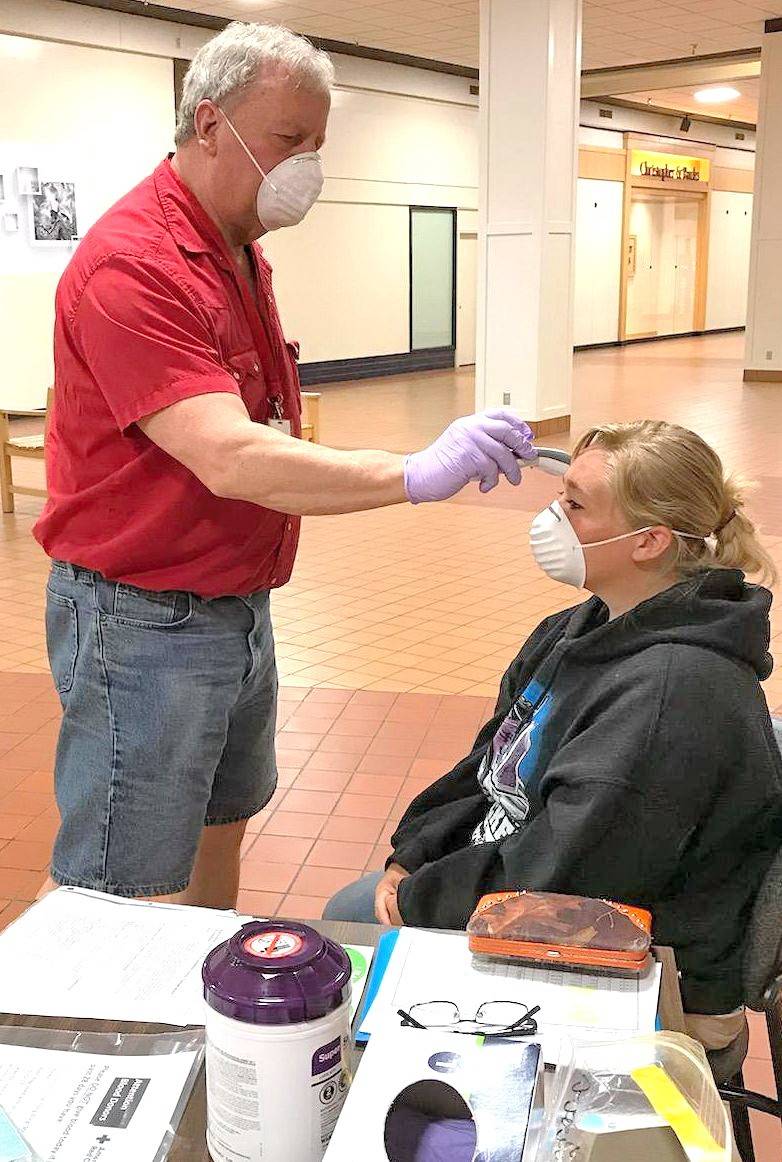 Six years ago, after retiring from a long career as a railroad conductor for the Union Pacific Railroad in Pocatello, Kenneth Akers found himself puttering around trying to fill his time. Even though he volunteered as a foster grandparent at elementary schools, he still had hours left in his day. That extra time spent sitting around concerned his lifelong friends, who started referring to Kenneth as a couch potato.

He knew he had to find something else to keep him busy.

For Kenneth, that something became volunteering as a health screener and donor ambassador for the Red Cross of Idaho, a great fit for the well-organized and outgoing 69-year-old.

Up to five days a week, Kenneth stands outside the Red Cross blood donation site at the Pocatello mall, greeting each donor with a handheld thermometer and making sure they’re healthy enough to donate. Each donor also receives a nametag, hand sanitizer and a face mask before entering the donation area, precautions put in place to keep donors and staff safe during COVID-19.

In his role as a donor ambassador, he answers donors’ questions, gets them a snack afterwards and makes sure they had a good experience.

These volunteer opportunities seemed like a natural fit for Kenneth, a longtime blood donor himself.

“When I was working with the railroad, if I was in the offices on the day of a Red Cross blood drive, I donated,” he said, adding that the Red Cross staff he became familiar with often mentioned volunteer opportunities that might interest him after he retired.

“Eventually they had turned their blood donor into an ambassador. Now, each day I volunteer I show up to the drives a bit early to set up the goodie tables with water, cookies and treats. … Though I do the prescreening outside, I do save myself a few cookies for the end of the day to take home.”

Before these enhanced safety precautions were put in place because of COVID-19, Kenneth spent his entire volunteer shift in the donation area, seated at the goodie table talking with fellow volunteers and thanking each donor.

An admitted “workaholic” before retirement, the divorced Pocatello railroad worker has three adult sons between the ages of 30 and 40.

“My kids are grown, and I just have to keep active,” he said. “I love to talk to people, all kinds of people. It comes from being a G.I. kid who has seen all 50 states and lived in all kinds of countries (while) growing up.”

To stay even more involved with his community, he also volunteers with the Operation Lifesaver group at the railroad.

However, his busiest volunteer commitment is with the Red Cross. Because of his rewarding experience with the organization, he encourages others to volunteer there as well.

“It’s a great way to meet people and have great conversations during each day,” he said.

To learn more about becoming a Red Cross volunteer health screener or blood donor ambassador, visit redcross.org/volunteer, send an email to IDMT.recruiting@redcross.org or call Nate Gilbert at 208-488-5231. Volunteers for these position are needed in both Idaho and Montana.