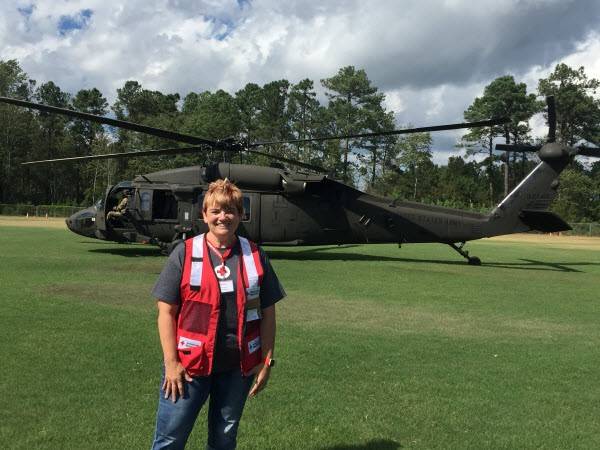 Volunteer Shellie Creveling, of Cascade, gets ready to ride in a National Guard helicopter. 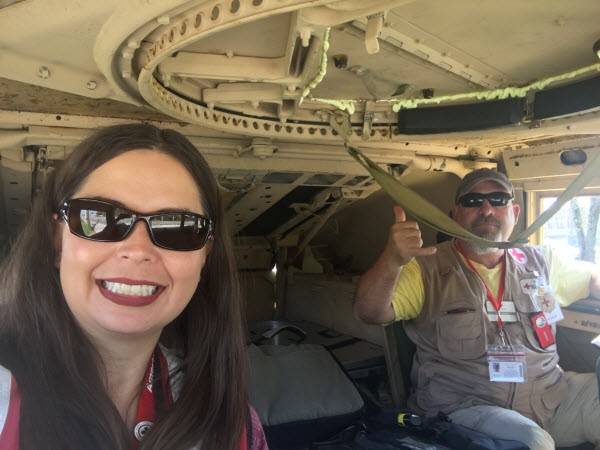 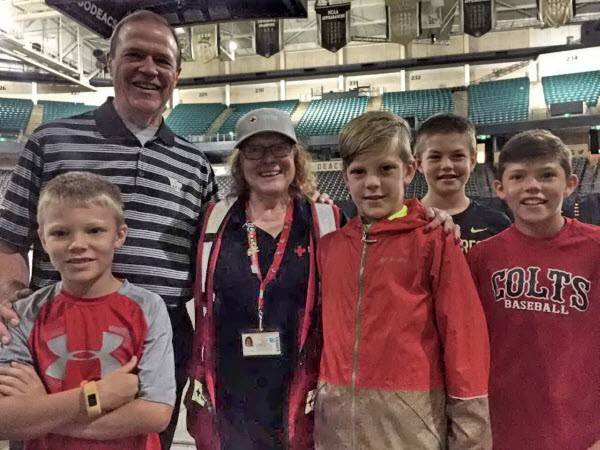 Montana Red Cross volunteer Toni Taylor, of Missoula, meets with the athletic director of Wake Forest University and his grandchildren during her deployment to Winston-Salem, N.C.

There are few certainties during a disaster deployment. Idaho and Montana volunteers and staffers who traveled east to provide Hurricane Florence relief this month know that well.

Don Nesbitt, of Mountain Home, and Diana Ochsner, of Jerome, set out on a 2,500-mile journey in an emergency response vehicle bound for Richmond, Va. But as the weather changed so did their plans. Midway through their trip, they were re-routed to Columbia, S.C., but even that new course had to be altered to avoid potential landslides.

Volunteers Shellie Creveling, of Cascade, and Cherie Stoddard, of Idaho Falls, took a more direct path to the East Coast, but they had little idea the next phase of their journey would involve a ride in a National Guard helicopter. The pair flew into Durham, N.C., a few days after Florence made landfall and were assigned to a shelter in Shallotte, N.C., 190 miles away. But intense flooding made roads impassable so their team had to log a few more sky miles, this time in a military chopper, before landing in a high school football field outside their assigned shelter.

For LayLa Johnson, of Idaho Falls, and her colleagues, their deployment to Goldsboro, N.C., meant getting shuttled around in military Humvees because floodwaters were just too dangerous for ordinary travel.

“The inaccessibility a week later is unfathomable,” Johnson said. “There are four-hour detours to get 45 miles.”

Some 20 Idaho and Montana Red Cross volunteers and staffers have deployed to places like Raleigh, N.C., Myrtle Beach, S.C., and Richmond, Va., to bring help and hope to those in Florence’s path. They are providing mass care and sheltering, working in warehouses and coordinating logistics with government agencies and community partners.

And while all are dealing with challenging, ever-changing conditions, they’re also making a profound impact.

“What an amazing morning,” Ochsner wrote from a warehouse operation in Hartsville, S.C. “Started our day at 5:30 with a briefing. At 7 we filled 250 totes with supplies and have them loaded onto three trucks. We will be leaving soon for deliveries to some flooded areas. More supply trucks will be coming to our warehouse this afternoon, and we will do the same process all over again. We are in our element.”

One thing is clear -- these relief efforts won’t end any time soon.

Florence dumped 10 trillion gallons of rain on the Carolinas, and as that water heads south, South Carolina faces a renewed threat of flooding. It’s anticipated multiple communities will have to evacuate over the next few days.

And that means more Idaho and Montana volunteers and staffers are expected to head out the door in the days and weeks to come.

“The people are distraught, but for the most part they have good spirits,” Creveling said. “They have been getting three meals a day and a place to sleep. If they came into the shelter with nothing except the wet clothes on their back, we have clothes for them. We’ve been able to make every little situation better, so they can concentrate on their big situation, their big tragedy.

"It's very rewarding to be able to give, even if it's only a little bit of my time."