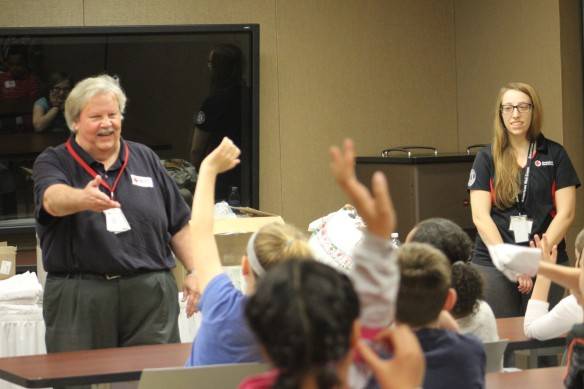 In late August, 2005, Hurricane Katrina swept through the Gulf Coast causing catastrophic damage from Central Florida to Eastern Texas. Especially devastated was the city of New Orleans, when the storm made landfall on August 29, and the protection levees failed, flooding almost 80 percent of the city and the surrounding parishes. Out of the many stories of sadness and loss came stories of heroism and survival. It is from the latter that The Pillowcase Project was born.

The Pillowcase Project was created by the American Red Cross in Southeast Louisiana following Hurricane Katrina when Kay Wilkins, Southeast Louisiana regional executive, had learned that Loyola University students carried their valuables in pillowcases when they were evacuated for Katrina. This inspired Kay and her team to work with an art therapist to create a program in which children living in makeshift communities across New Orleans decorated pillowcases as emergency supplies kits.

Soon, The Pillowcase Project became a preparedness education program for elementary school students. In just a few years, it was adapted and implemented by several other Red Cross chapters with substantial success. Here in Northeast Ohio, the Red Cross taught nearly 4,500 students preparedness last year through the program.

The goal of the project is to help create a generation of children who understand the science of hazards, are empowered to take action preparing for emergencies, and are excited to help create a prepared community by sharing what they have learned with family and friends.

Students who participate in The Pillowcase Project will be able to:

In addition to The Pillowcase Project, the Red Cross has teamed up with Disney to develop the Mickey and Friends Disaster Preparedness Activity Book, which has been distributed to more than 300,000 youth nationwide. The book teaches kids and families how to prepare for and respond to a wide range of disasters and emergencies through interactive games and activities. The book is available to download in English and Spanish.

Disney also sponsored the creation of Monster Guard – the first mobile app created by the Red Cross designed specifically for kids. The app complements The Pillowcase Project, and is a game where children role-play as various monster characters and engage in interactive training episodes for hazards such as home fires, floods and hurricanes.

To learn more about The Pillowcase Project and register your school to participate, visit our Resources for Schools page and scroll down for information.