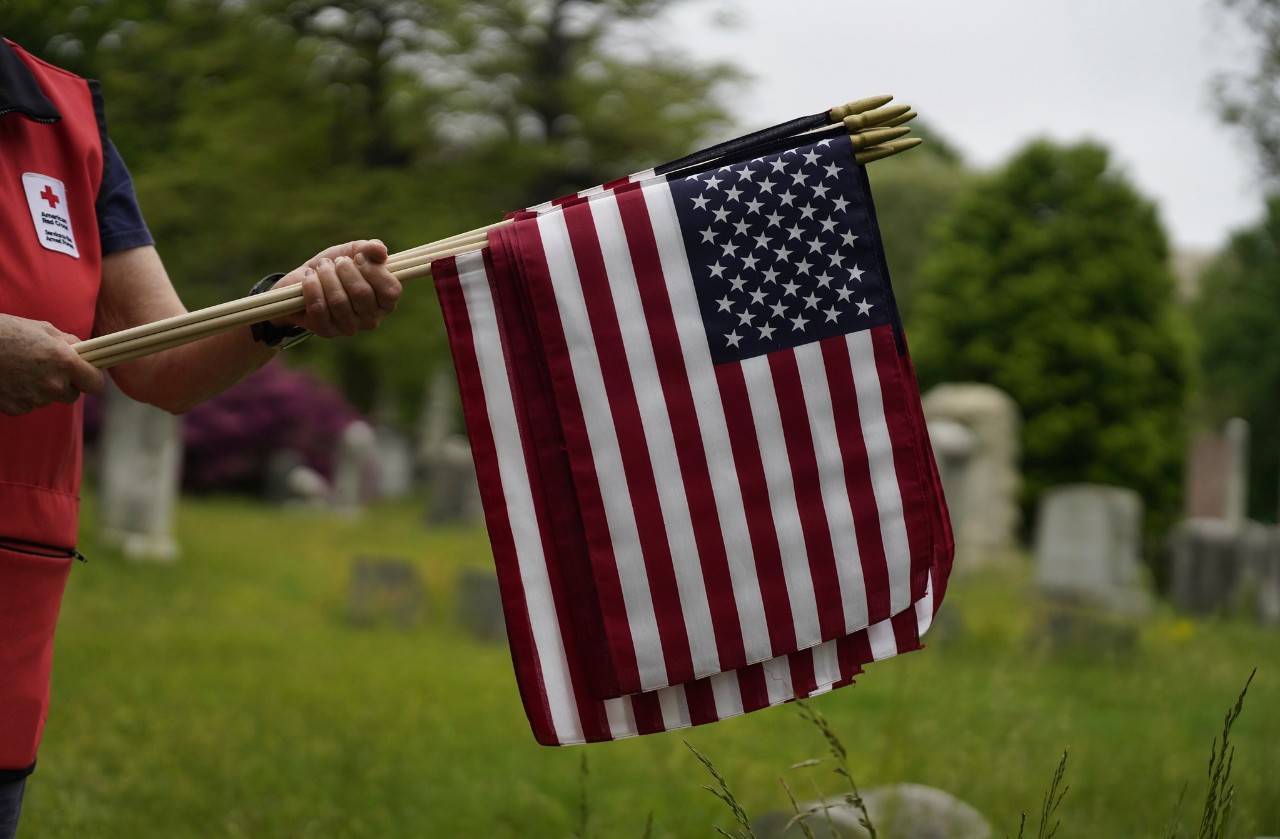 On a Saturday morning in May, Red Cross volunteers assembled at the Woodlands Cemetery to place flags on graves of military veterans. Jaime Boris, SAF-IS (Service to the Armed Forces Regional Program Manager) was busy organizing maps, bundles of flags, and providing instructions for teams. Bernadine Salgado, Grave Gardener for the Woodlands Cemetery and Red Cross SAF volunteers helped organize the event.

The Woodlands Cemetery, a National Historic Landmark District, was established in 1840 as a Victorian Cemetery and Arboretum. This gem of Philadelphia Parks is hidden near the VA Hospital in University City. How appropriate for a resting place for our vets. These veterans served our country in conflicts since the Civil War.

Red Cross SEPA CEO Guy Triano, who was placing flags, commented “this is a wonderful experience to say thanks at the time around Memorial Day. This flag placing tradition is from the commitment to our fallen by Clara Barton, the founder of the American Red Cross.” After the Civil War, Barton led the effort to mark graves of 13,000 fallen soldiers at Andersonville, Georgia.

As volunteers dispersed in teams, Bernadine led me to the grave of Emily Bliss Souder, a Volunteer Army Nurse. On July 15, 1863, she arrived at the Gettysburg battlefield. Souder was one of many nurses who assisted the wounded and dying. Her series of poems and letters brought forth emotions of this historic battle. Did Souder and Clara Barton cross paths? We will never know.

Bernadine next brought me to the grave of Marie Hidell, a Navy Nurse at the Philadelphia Naval Hospital during the Spanish Flu Epidemic of 1918. She worked day and night caring for soldiers stricken with this flu. She became ill with the flu and lost her life. Marie Hidell was posthumously awarded the Navy Cross for service and devotion to duty.

A volunteer at an early age can be a volunteer for life. Ranga Radhakrishnan brought his daughter Rheeya Sudhagar. With a big smile, Rheeya, a member of the Red Cross Youth Organization, said she wants to be involved in the community. Li Gao volunteered along with her daughter Aspen Zhuang, sharing this experience.

Sydney Dixon was placing flags in honor of her parents, whose graves are in Arlington National Cemetery. She could not go to Arlington, but she could participate in this event to honor of her father’s service. She proudly told me he was a Tuskegee Aviator during WWII.

Barbara Turner’s brother served two tours of duty with the Air Force in Vietnam. When her father was terminally ill, Red Cross SAF brought him home from Vietnam so he could be with his father before he passed. “The Red Cross did it. They got him home!” she said. This is her way of giving back.

On the following weekend, Red Cross volunteers placed flags on the graves of approximately 270 veterans at the Lower Merion Baptist Church Cemetery in Bryn Mawr. According to the church’s website, the cemetery opened in 1811 and includes the graves of 19 Continental Army soldiers, 16 veterans of the War of 1812 and 28 Civil War veterans. A full list of the more than 3,000 people buried at the cemetery is available from the Lower Merion Historical Society.

Placing flags on the graves of veterans is a sign of respect, a time for community service, and remembrance of history and those who served our country.