Bringing hope and joy to the youngest displaced by historic flooding 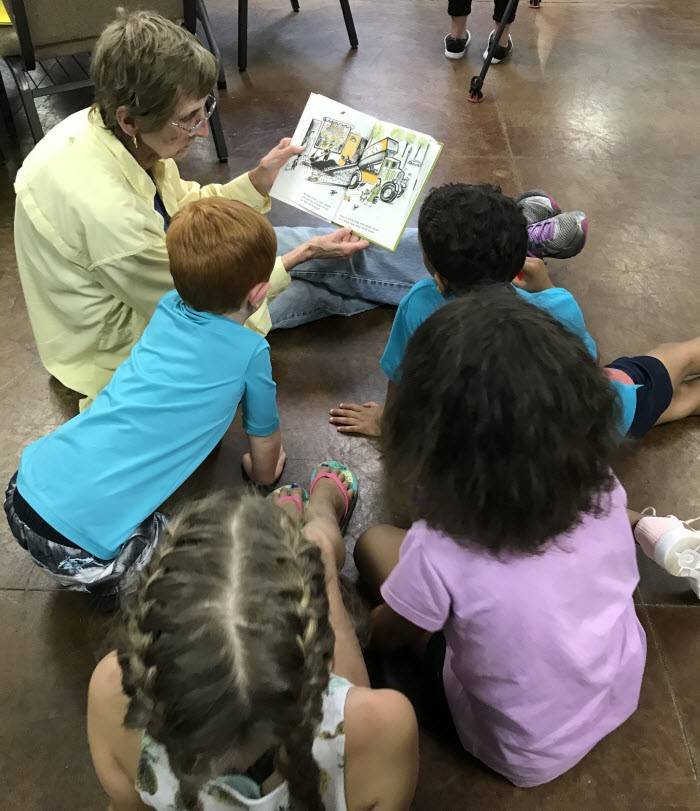 Like many of the residents who live along the Arkansas River, 80 year-old Maureen “Mo” Didion, a long-time resident of Fort Smith, Arkansas, has been forced out of her home as flood waters continue to rise. Members of Didion’s church helped her move out furniture last week in anticipation of the flooding, before the home was fully immersed.

“The flood waters are up to the roof now,” Didion said, noting she has had to move twice since the flooding began last week—once before her own home flooded and again when the home of the daughter she was staying with flooded as well. “Her entire first story is under water.”

Didion hasn’t let the incident get her down, though. She is currently dealing with the flooding of her home in the best way she knows how – by volunteering.

“So many people have helped me in my life, that I chose to help others,” Didion said.

The 50-year Red Cross volunteer holds story time for the children at the Fort Smith Red Cross shelter located at Evangel Temple Assembly of God, in the hopes of raising their spirits as they deal with the catastrophic flooding. “We’re survivors,” she tells them. “We’re going to get through this.”

Didion has been by to read stories to the children staying at the shelter each day since May 30. She brings children’s books she checks out from the library at the University of Arkansas at Fort Smith, where she is currently finishing her fourth bachelor’s degree.

“I like listening to the stories,” said eight-year-old Anna Burris from Moffett, Oklahoma, whose family has been staying at the Fort Smith shelter since it opened Friday, May 24. Their area was one of the first evacuated as flood waters began to rise. “It gives us something to do.”

“Our place in Moffett is still under water,” said Anna’s mother, Sarah Burris, as her kids play with bubbles in the parking lot in front of the shelter. “We have no idea where we’re going to go next, or how long we’ll be here.”

With the Arkansas River still rising, and no estimated projections as to when the flood waters will finally recede and residents will be able to return to their homes, those staying at the Fort Smith shelter are simply waiting until the recovery process can begin. While the Red Cross and local partners work to ensure that those who have been displaced by flooding have access to shelter, food, and basic needs, volunteers like Didion allow victims the opportunity to take their minds off the tragedy, if even for a short period of time.

Thank You for Your Support
.type=article.p=1
View All
/content/redcross/en/local/arkansas/about-us/news-and-events/news/bringing-hope-and-joy