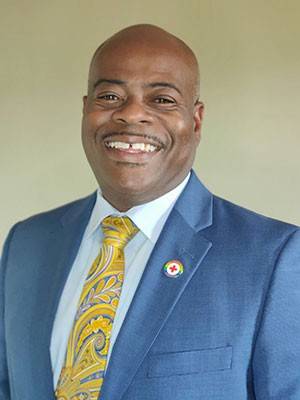 Tony Briggs was named the Chief Executive Officer of the Central California Region in 2019. In this role, Tony leads a team of 30 staff and nearly 2,000 volunteers throughout the 11-county region that serves the heart of California from the Sierra Nevada to the Pacific Ocean.

A native of Philadelphia, Tony completed a successful 24-year career in the United States Navy, rising to the rank of Chief Petty Officer. One of his career highlights include leading 80 Sailors deployed throughout the Western Pacific in support of humanitarian actions. He was an integral member of a team who brought a nuclear-powered aircraft carrier to Los Angeles, showing off the Navy’s finest to more than two million individual media impressions over a four-day period. He served as a spokesperson for an amphibious assault battle group consisting of 5,000 Sailors and Marines deployed to the Persian Gulf with outstanding results concerning sensitive subjects affecting national security.

Tony joined the American Red Cross in 2014, as the biomedical communications manager for the Southern California Region, he was responsible traditional media, social media and media relations for a territory from Santa Barbara to San Diego. In September 2015, he accepted a position as the communications director for the Desert to the Sea Region and has deployed to some of the largest disaster responses in the history of the Red Cross, witnessing firsthand our compassionate humanitarian work in action.

He earned a Bachelor of Arts degree in Communications from the University of Maryland, University College and holds certificates in six sigma quality improvement. Tony and his wife Kelly have been married for nearly 30 years and are the proud parents of five children and enjoy spoiling their four grandchildren.