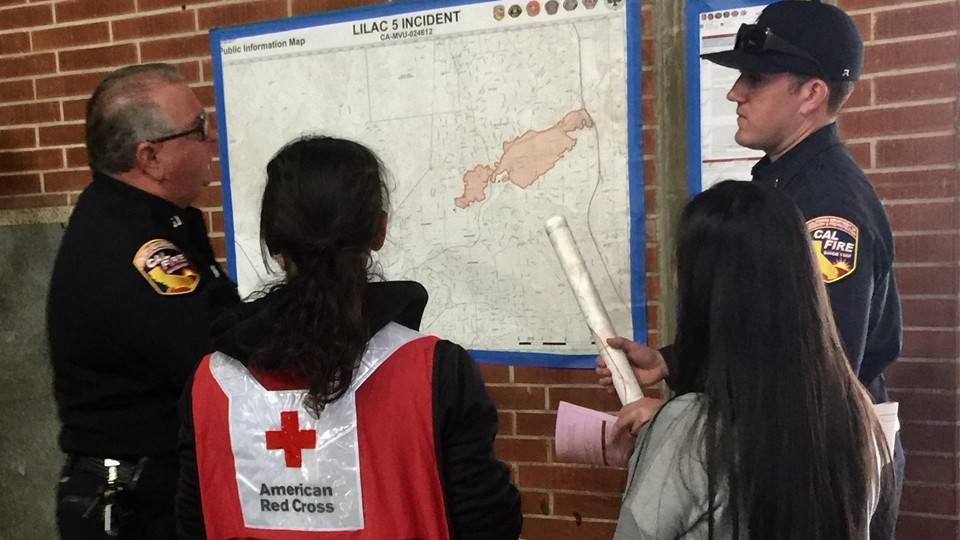 “Through the Red Cross we had access to many resources. The Red Cross was the liaison connecting us to all these essential organizations.”

Between December 7-14, 2017, the Lilac Fire burned 4,100 acres, destroyed 150 structures, and forced 44,000 households to evacuate in San Diego’s North County area. Along with partners, the American Red Cross of San Diego/Imperial Counties was there to provide help and hope to evacuees in multiple Red Cross shelters during the immediate response period. Red Cross Case Workers also assisted with long-term recovery efforts for those affected by the fire. Here is one of those stories:

The fire breathing dragon was approaching fast. It couldn’t have been at a worst time. How do you evacuate 14 dogs, including 11 newborn puppies? Amy Towey had just been ordered to evacuate from the oncoming Lilac Fire. As the fire approached, Towey located a veterinarian willing to shelter all of her dogs. With minds at ease that the mom and pups would be fine, Towey could concentrate on herself and her family.

Soon, their home was engulfed by the fire and they had no idea what to do next. “Complete utter shock! You become a zombie. You do not know where to turn.  Everything has been taken from you until down the road you realize that you have all your family and animals; we have just us! The first initial weeks you are numb. You don’t sleep. You don’t eat,” she recalled.

Supportive friends put Towey and her family up in a hotel for the first three days until they could get their bearings. They had no idea what to do next and where to go. It is then that they saw news coverage about how the American Red Cross was assisting people affected by the Lilac Fire.

“That was huge, a big piece of the puzzle, the greatest lifesaver in the entire process,” Towey said. The news story pointed them to the Local Assistance Center that the County of San Diego set up at the Vista Library.

Arriving at the center, Red Cross volunteers guided Towey and her family through the various disaster relief and recovery stations set up to assist fire victims. They offered support and reassurance that they were not alone, and provided all kinds of services all under one roof.

“They were kind souls who reassured us that once registered with the Red Cross we are in a database and resources will flow to us,” shared Towey. “They sat with us and gave us peace of mind while we were waiting for each station to open up. Just the presence of these volunteers was a huge comfort,” she continued.

Lost identification was replaced at the DMV station. Property reassessment forms were filled out with the County, the Salvation Army provided vouchers for clothing and personal items and the Toweys were given a debit card for personal expenses.

“I remember standing in Walmart and having a meltdown. I was overwhelmed. I had lost everything. I didn’t even have a toothbrush or underwear. I needed everything.  We had a lot of hurdles. Through the Red Cross we had access to many resources. The Red Cross was the liaison connecting us to all these essential organizations,” she recollects.

Towey said that it was humbling for her to be in a position of having nothing and to be on the receiving end of so much generosity.

Voluntary Organizations Active in Disaster (VOAD) helped coordinate volunteers to assist with sifting through the debris at their former home as the Red Cross supplied food, water, shovels, gloves and masks. VOAD also connected the Toweys to countless religious and charitable organizations.

Towey appreciated the help from start to finish and said that the Red Cross was always one step ahead, checking in on them to make sure they were well taken care of even many months after the fire.

“They were so organized right from the beginning. I never needed to go back to them for help. They were reaching out to me all the time to make sure we always had everything we needed,” Towey said. “We had a lot of hurdles. The Red Cross is boots-on-the-ground, there from day one. I am an escrow officer by trade so I am a chaos manager as it is. In retrospect, watching all these people running around in their little vests, someday I know I am going to pay this forward for what everyone has done for us. It was huge. I am standing here, I got through it because of all these people and their efforts.”

It’s been a year since the Lilac Fire. When she was interviewed, Towey shared that she is now in the final stages of moving into her new home and had just returned from the airport having dropped off relatives. They had come to celebrate her daughter’s wedding. Her biggest crisis now was getting through the wedding planning, a celebration of a new beginning.

The American Red Cross prevents and alleviates human suffering in the face of emergencies by mobilizing the power of volunteers and the generosity of donors. Please visit redcross.org/volunteer for more information on volunteering with the Red Cross or visit redcross.org/donate to make a donation.