Raymond Boyd, a servant at heart and a true hero for his community

Raymond Boyd, a servant at heart and a true hero for his community 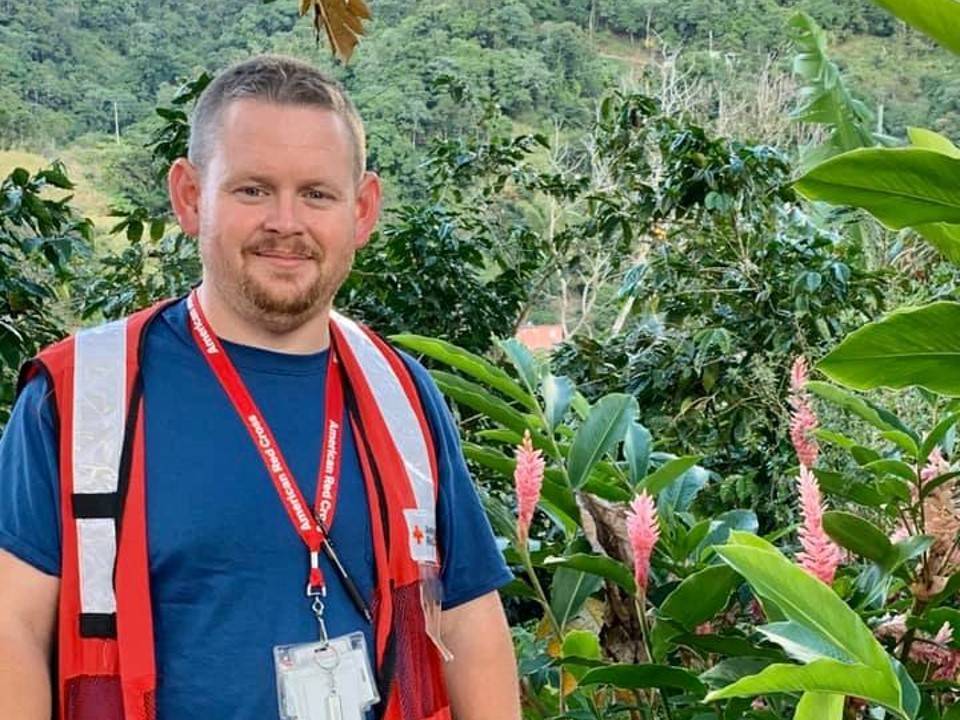 “I truly live to serve others,” says Boyd, 38, about his life-long calling that started when he was a child and got involved in feeding the homeless.

He is, indeed, a true hero that must be honored in Red Cross Month, because his hard-working and giving spirit has made a huge impact in people’s lives locally and more recently in Puerto Rico, where he was deployed following an earthquake.

Today he is the Broward County Disaster Program Manager and nobody was as prepared as him to embrace that role. His life journey is proof of that.

“My mom says that from a very young age, I showed expressions and actions towards helping others”. Metaphorically speaking, his job in the Salvation Army, where he accumulated 15 years of service both as a volunteer and staff member, was high school and the Red Cross, college.

He grew out to be the director of emergency services in the Miami area for the Christian organization before his current position at the Red Cross. But before that, he had to walk a long path.

Boyd began scrubbing toilets, worked his way up to become a property manager, then landed a position as a chaplain/pastor until he finally developed a career in the disaster field.

As a certified minister, his duties involved leading bible studies and Sunday services, as well as providing spiritual care for the homeless during three years.

Then, in 2017 he was called to help with hurricanes Irma and Maria, which forced him to leave aside his role as a pastor due to an incompatibility in his schedule. He was required in a more full-time capacity.

His list of duties was long. Involved recruiting people, training the staff, supervising volunteers, helping running the operation and even establishing liaisons. “I had to do everything relatedto disaster from A to Z.”

Those years were his gateway to the Red Cross because while working in Miami Airport, he managed to build relationships with the staff and got familiar with the line of service of the Red Cross. When he learned there was a job opening seven months ago, he decided to apply without hesitation.

“I wanted to help people in a daily capacity and to be more consistently active in the disaster field in general and not only in hurricanes, earthquakes or floods. I can do that at my current job where I receive around 12 calls per week for home fires and assist in emergencies such as a car hitting a house,” explains Boyd.

And this part of the story is where his heroic side has been more visible. We can all agree that having to wake up at 2:00 am to assist in a fire and returning home around 5:00 in the morning is nothing less than heroic.

But he doesn’t mind the trouble. On the contrary, he devotes to his role with joy and commitment. “This is actually a way of life for me. I am very blessed to provide for my family with my calling.”

He is a man of faith and a true servant that even in trying times never cease to lend a hand to those in need, in the best way he can. He did so while his wife, who he married 17 years ago, went through surgery and chemotherapy after being diagnosed with stage 3 colon cancer in October 2018.

“When I got back from Hurricane Michael, I went from the airport straight to the hospital and that was my last deployment with the Salvation Army,” says Boyd, who worked locally to stay within reach of his home until his wife ended chemo sessions.

But the giving spirit runs in the family. Before her sickness, the woman who walks next to Boyd was volunteering in the disaster field and working as a VPK teacher simultaneously. She resumed her job in July 2019, after six months of chemotherapy, and is now on remission taking only medications.

“Our kids are just like us,” states Boyd referring to their three children of 11, 15 and 17 years of age who, alongside his wife, are his priority whenever he is not on duty.

“When I’m not serving at the Red Cross, I am serving my family. We spend time doing outdoor activities and enjoying each other.”

On January 14, 2020, he had to say goodbye briefly to his family to serve the victims of a strong earthquake that hit Puerto Rico. This experience ended up becoming a reawakening to his spirit.

As part of the disability integration team, he went from home to home assisting those in need. “My job there was to find people with any sort of disability to check if their mental and physical needs were being met.”

He also served as a translator for being a bilingual American and Cuban descent. His ability to speak fluent Spanish was highly appreciated in an atmosphere filled with stress and sadness.

“These people were stressed out, so I didn’t want to add more stress by forcing them to understand a language (English) they don’t know well.”

But his job got to a whole new level when he faced the shattering reality of those living in the countryside. “I like going where the forgotten are and people who live in the mountains of Puerto Rico are oftentimes forgotten.”

He suddenly found himself providing emotional support to people who had lost everything and had to relive the earthquake experience with ground shakes that were occurring 8 to 20 times a day.

“I was glad to be there hugging them or making them laugh. For a brief moment, they disconnected from their own tragedy and realized there’s more to life. It was amazing being able to provide that comfort.”

And by serving as some sort of emotional counselor, he gradually started connecting with his spiritual side that had been in a dormant state for years.

This sentiment increased when he met Castillo, an 80-year old man who refused to move out from his half-destroyed property and preferred living in a tent to stay close to the house he built for his late wife.

He also didn’t accept the donations the Red Cross provided and instead decided to distribute them among other residents who, in his eyes, were more in need despite the fact he barely had a kitchen and bathed every day at his son’s home.

“I saw myself in him. Not only is he a true servant but we share a similar love story because I met my wife when I was 13 and she was 11. Six years later we got married. It’s amazing to see everything this man is doing for love.”

Having met Castillo and so many others in Puerto Rico created such an impact in him that he is now planning on getting properly trained as a spiritual care worker by the American Red Cross.

While that happens, he will continue serving wherever he is needed bringing his generous heart in every situation, challenging himself to walk the extra mile and putting everyone first.

Be a hero in your community and help people in need by making a financial donation to redcross.org/donate or calling 1-800 RED CROSS. 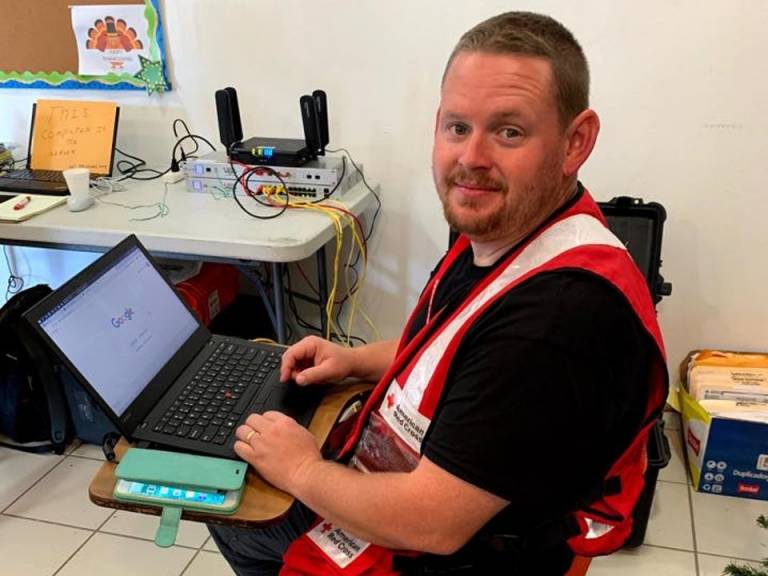 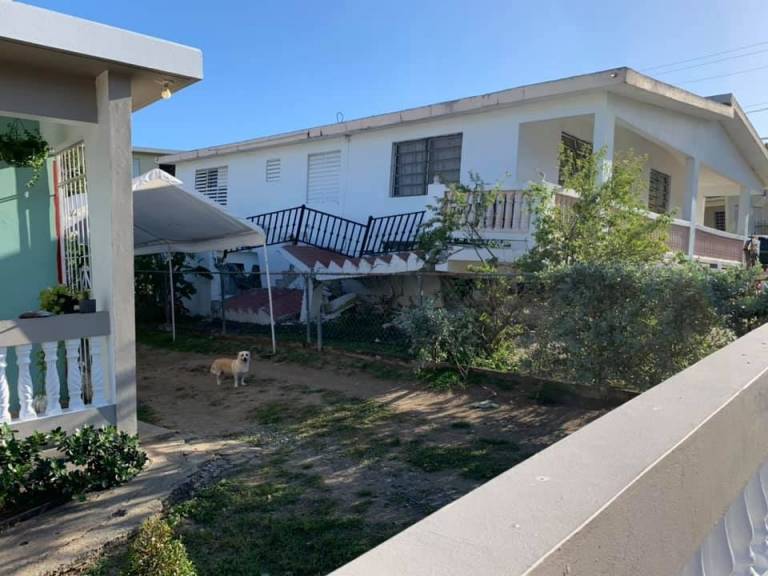 Building damage from the impact of the continuous earthquakes affecting Puerto Rico. 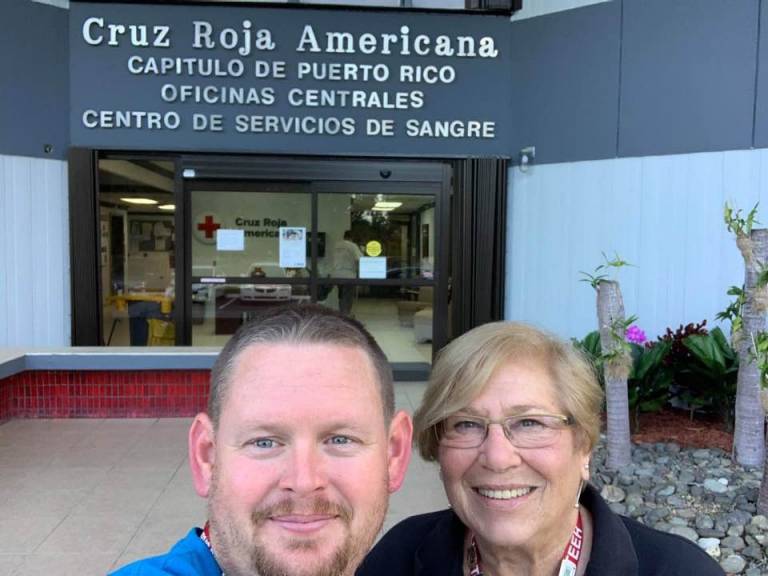 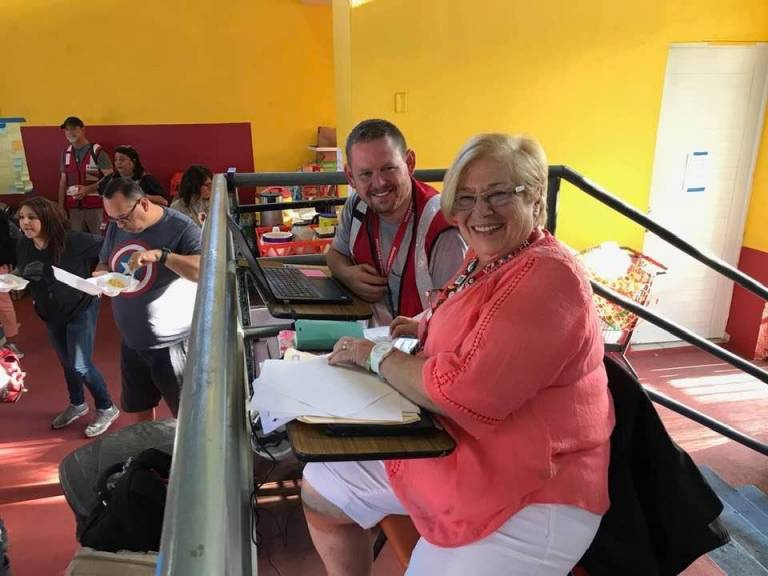 Raymond Boyd and Laurie Levene working to find vulnerable communities to make sure there needs are being met in the aftermath of the Puerto Rico Earthquakes.