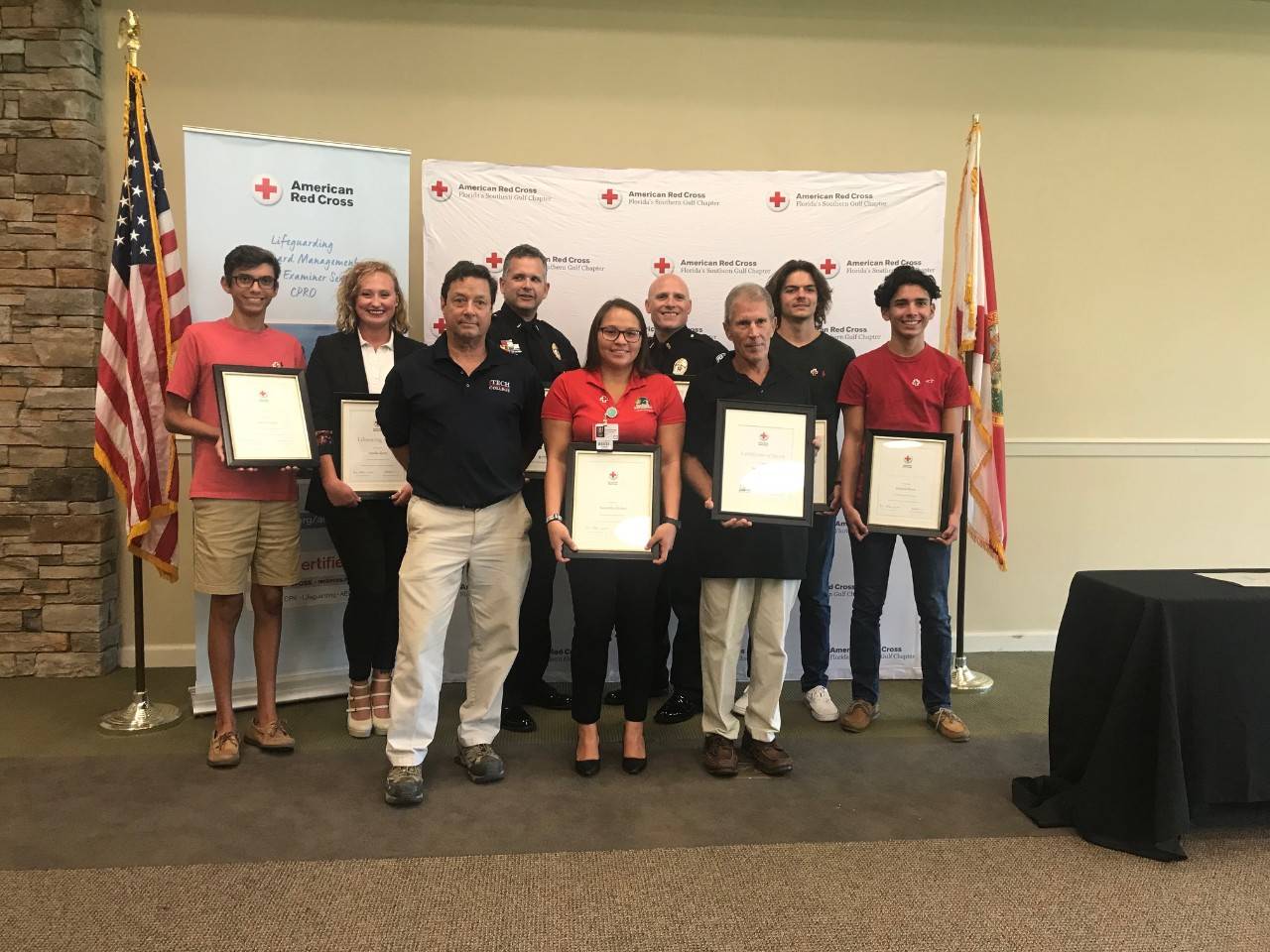 On May 11, William Parry experienced a cardiac emergency in the main pool at the Golden Gate Aquatic Facility in Naples, Fla. James Bendza, a bystander in the water, saw Parry in distress and held him up until lifeguards Edward Flores and Samantha Molina arrived to aid the victim. They found Parry unresponsive and without a pulse. Molina quickly laid on the pool deck to hold his head above water, while Flores ran to obtain the backboard. Lifeguard Aanika Sletta called 9-1-1, while lifeguards Joseph Logan and Zackary Derk cleared the other pools and kept patrons out of the water. Another patron grabbed the AED while Flores and Molina pulled Parry out of the water onto the backboard. Two off-duty officers, Lt. Michael O'Reilly and Sgt.Matthew Doyle, stepped in to provide their assistance. Molina proceeded to give two ventilations while O'Reilly conducted chest compressions. Together, they placed the AED pads on Parry and awaited as it analyzed and advised the shock. Shortly thereafter, they resumed compressions until emergency medical responders arrived. Parry was then transported to the hospital for further treatment.

Each recipient played a pivotal role in saving Parry’s life and received special awards noting their heroic actions during a ceremony at the North Collier Regional Park Exhibit Hall in Naples, Fla.

“We congratulate the quick thinking and actions of the bystander who notified lifeguards of the constituent’s distress,” said Barry Williams, director for Collier County Parks and Recreation. “Lifeguards are trained to a high standard and demonstrated their competence in their response and saving Mr. Parry from sudden cardiac arrest. The Division is fortunate to have such highly trained responsive staff in our aquatics facilities. We are thankful that this team effort resulted in many more years for Mr. Parry.”

The Lifesaving Award for Professional Responders (LAPR) is the highest award given by the Red Cross to individuals or group of individuals who save or sustain a life as part of their employment or while on duty and had an obligation to respond using skills learned in a Red Cross Training Services course.

For their swift action and training, these individuals were recognized with a LAPR by the Red Cross:

In addition, Sgt. Matthew Doyle and Lt. Michael O’Reilly were awarded the Certificate of Extraordinary Personal Action (CEPA). This award is given to individuals, like Doyle and O’Reilly, who step up in an emergency and help save or sustain a life.

These award recipients exemplify the mission of the Red Cross to prevent and alleviate human suffering in the face of emergencies and are to be commended for their willingness to help others in distress.

“Eight local community heroes jumped in to action and their prompt response and lifesaving skills saved a life,” said Jill Palmer, executive director for Florida’s Southern Gulf Chapter. “In our community we are surrounded by water and knowing what to do in an emergency is vital. We are so grateful for their efforts and that we could recognize them for their extraordinary actions.”

People can go to LifesavingAwards.org to nominate and recognize an individual or group of individuals who have used the skills and knowledge learned in an American Red Cross Training Services course to help save or sustain a life.

About the American Red Cross:
The American Red Cross shelters, feeds and provides emotional support to victims of disasters; supplies about 40 percent of the nation's blood; teaches skills that save lives; provides international humanitarian aid; and supports military members and their families. The Red Cross is a not-for-profit organization that depends on volunteers and the generosity of the American public to perform its mission. For more information, please visit redcross.org/southflorida or visit us on Facebook and Twitter at @SFLRedCross.