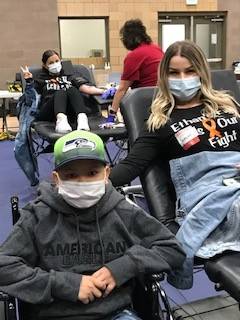 In November, 12-year-old Ethan Nguyen of Boise was diagnosed with leukemia and has needed several units of blood and platelets. His family is holding blood drives in his name to honor blood donors and raise awareness for the need for lifesaving blood products.

As his younger sister guided him around the Salvation Army gym in his wheelchair, 12-year-old Ethan Nguyen encouraged and thanked donors, a big smile on his face. Just six months earlier, Ethan was diagnosed with leukemia, a cancer of the blood and bone marrow that requires frequent blood and platelet transfusions as part of the treatment process.

On this day, his family was holding a Red Cross community blood drive in Boise in his name.

“He loved it,” his aunt Samira Hernandez said after the March drive, which brought in 26 units of lifesaving blood. “It was great just to see him happy. He was so excited to see that all these donors were coming in at a blood drive held in his name.”

In November, Ethan received his leukemia diagnosis, the same form of cancer that had taken his grandmother’s life 10 years earlier.

“Hearing his diagnosis was so, so devastating,” Samira said, especially after losing another loved one to the same disease.

Understandably, Ethan struggled both emotionally and physically at first, undergoing aggressive chemotherapy that takes a toll on a young body.

“Mentally he wasn’t doing well,” she said. “He was really scared.”

Ethan receives chemo orally, through a port and through his spine to prevent the cancer from spreading to his spine and brain. Just three weeks into his treatment, he developed sepsis, which required doctors to surgically remove his port. But even then, some of the sepsis remained, and Ethan underwent a second surgery in December to remove a portion of his thyroid. That surgery was complicated because of difficulty getting blood, a result of the holidays and the COVID pandemic. That’s when his family decided to reach out to the Red Cross about hosting a blood drive.

“We said, ‘OK what can we do as a family to help the situation or do something greater,’” Samira said.

“This is the least of what we can do as a family for children like Ethan, or for anyone who needs blood.”

In his first few months of treatment, Ethan received 18 units of blood and nine units of platelets. And he’ll continue to receive transfusions going forward – blood products available because of the generosity of donors.

Ethan’s cousins, Talia, 15, and Veronika, 14, are planning to host another drive for Ethan in June as part of Leaders Save Lives, a Red Cross program that encourages young people to host blood drives and offers them an opportunity to win a college scholarship. That drive will be held at Ethan’s school, Lake Hazel Elementary.

“This is such a great opportunity for them,” Samira said. “We’re hoping this will be a yearly event and the turnout is even greater than the last.”

Even though the chemo continues to make him ill, Samira said Ethan is doing much better. He loves spending time with his three cousins, playing Xbox and Pokémon Go and cheering on the Seattle Seahawks.

“Considering everything that he’s gone through, he’s doing great,” Samira said. “Once he saw how much support he had he started to improve a lot.”

“Ethan is the nicest kid. He’s sweet, and he loves to joke around. He’s funny … he’s literally a funny 12-year-old kid.”

And he recently got a new best friend, Roki, a mini goldendoodle puppy compliments of the Make-A-Wish Foundation.

Ethan still has a long road ahead, but all signs look promising. He went into remission in the first 29 days – a key benchmark in the treatment process -- and has no signs of the cancer in his bone marrow.

“Which is amazing,” Samira said. “That was a huge relief.”

And their family can’t thank the donors who came out to their drive and countless other drives enough for donating the lifesaving blood Ethan and others like him depend on.

Come on out and donate

Every day the Idaho Red Cross holds blood drives in communities across the state, collecting the lifesaving blood products Ethan and so many others like him depend on. Find a blood drive near you and schedule an appointment today by visiting RedCrossBlood.org or calling 800-RED-CROSS. A donation takes less than an hour and can potentially save more than one life.