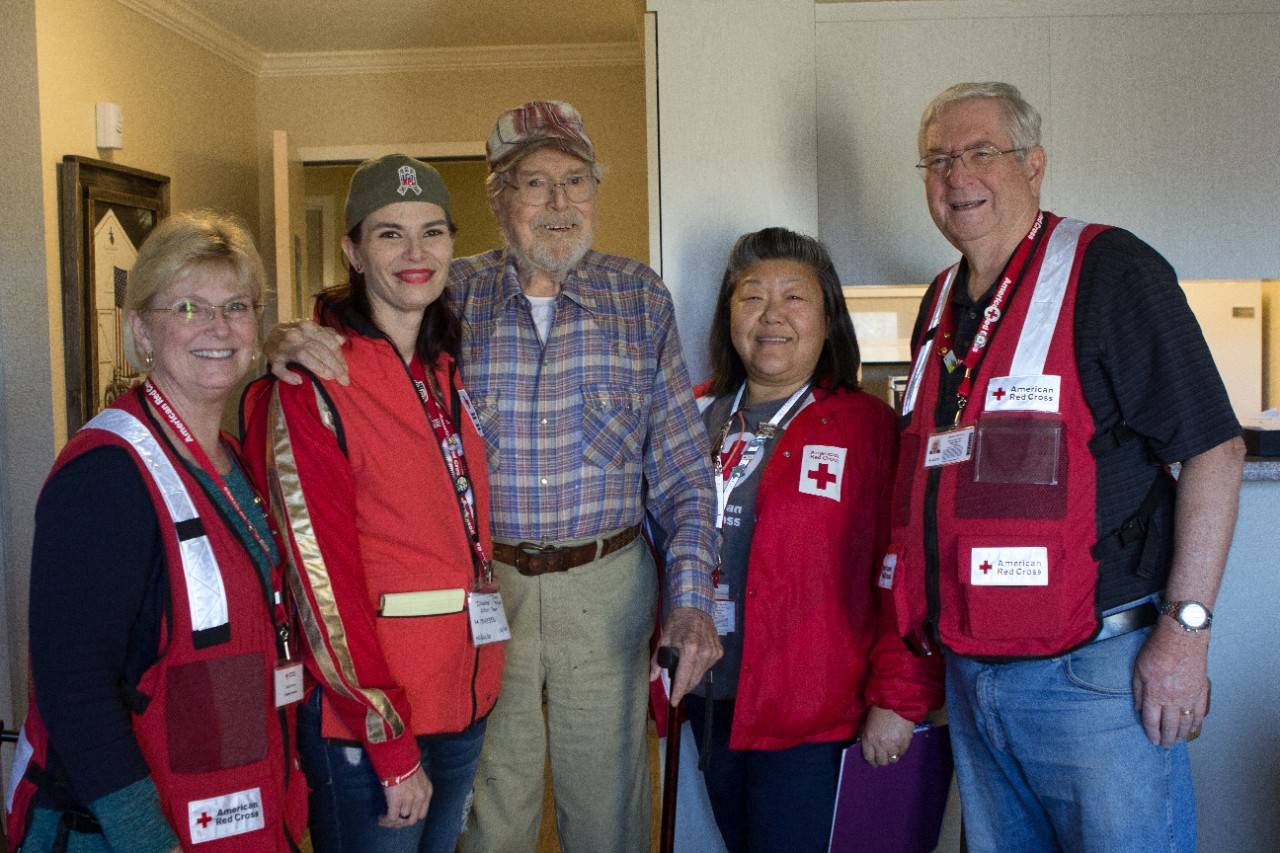 Claudia Warner, far left, and her husband Dave, far right, served on a Red Cross reunification team in California. Arnold Shelton, center, was one of the people they helped locate.

Red Cross volunteers Claudia and Dave Warner left California with deep respect for the people of Paradise and nearby towns.

So many of those for whom they searched after the Camp Fire destroyed Paradise wouldn’t have been able to escape without neighbors and first-responders ensuring their safety.

“It tells you a lot about the community,” Claudia said.

Those were the happy endings as the Warners worked on the Red Cross reunification team, a squad that numbered up to 17 during their two weeks in California. Those were the endings that earned a “woohoo!” from the Ammon, Idaho, couple.

But then there were the times they found the name of a missing person on the latest fatality list. During their search, 1,200 people were listed as missing. The death count stood at 88 when they left.

“There were times we’d get the phone call we could stop looking, and we knew it was because he’d moved to the deceased list,” Claudia said.

“When we went into the shelters and there was a wall of ‘have you seen this person?’ posters, and we would see pictures of people we knew weren’t found alive,” Claudia said. “When the name had a face that’s when it became more difficult.”

The most destructive wildfire in California history was still burning when they deployed to California. The fire started Nov. 8, and the Warners arrived for their two-week deployment on Nov. 19.

The pair started by going to shelters, both Red Cross shelters and independent shelters, and making sure everyone was registered through the Safe and Well program.

Volunteers in California and working online across the country as part of the virtual reunification team assembled a database to figure out who was missing and who had found a place to stay in a shelter, a hotel or with family. The task was huge.

Family and friends asked for the status of their loved ones, and Red Cross volunteers consulted the Safe and Well list. With emergency welfare inquiries for people not on the list, the Warners and others would start searching.

Paradise was a nice place to retire. The community was disproportionally older.

“These people don’t know they’re missing. They know where they are,” Claudia said. “We got one for a 100-year-old lady whom they hadn’t been in contact with for a dozen years.”

Dave said they looked for many older people and severely handicapped but also younger people who were living alone. The community had almost no time to evacuate.

“We spent a lot of time playing Dick Tracy,” he said.

“We even found a homeless man through his medical conditions. He’d gone to find a clinic,” Claudia added. “That was a ‘woohoo’ moment. Homeless people are almost impossible to find.”

The Warners were part of a search for fire survivor Arnold Shelton that was featured in the L.A. Times. Shelton, 87, was newly a widower and with no family to turn to for help. As the search dragged on, they all feared him lost to the flames.

“When we were able to find out where he was, we all jumped in the car to see him,” Claudia said.

The Camp Fire was the Warners’ first time volunteering on a reunification team, but they said they would do it again.

“This was a unique situation and required some different strategies for the challenges of reunification,” he said. “We learned an awful lot. The Red Cross has learned a lot. It may change much of what we do in reuninification after the next major catastrophe.”

“We just got there at the right time to help,” Claudia said.