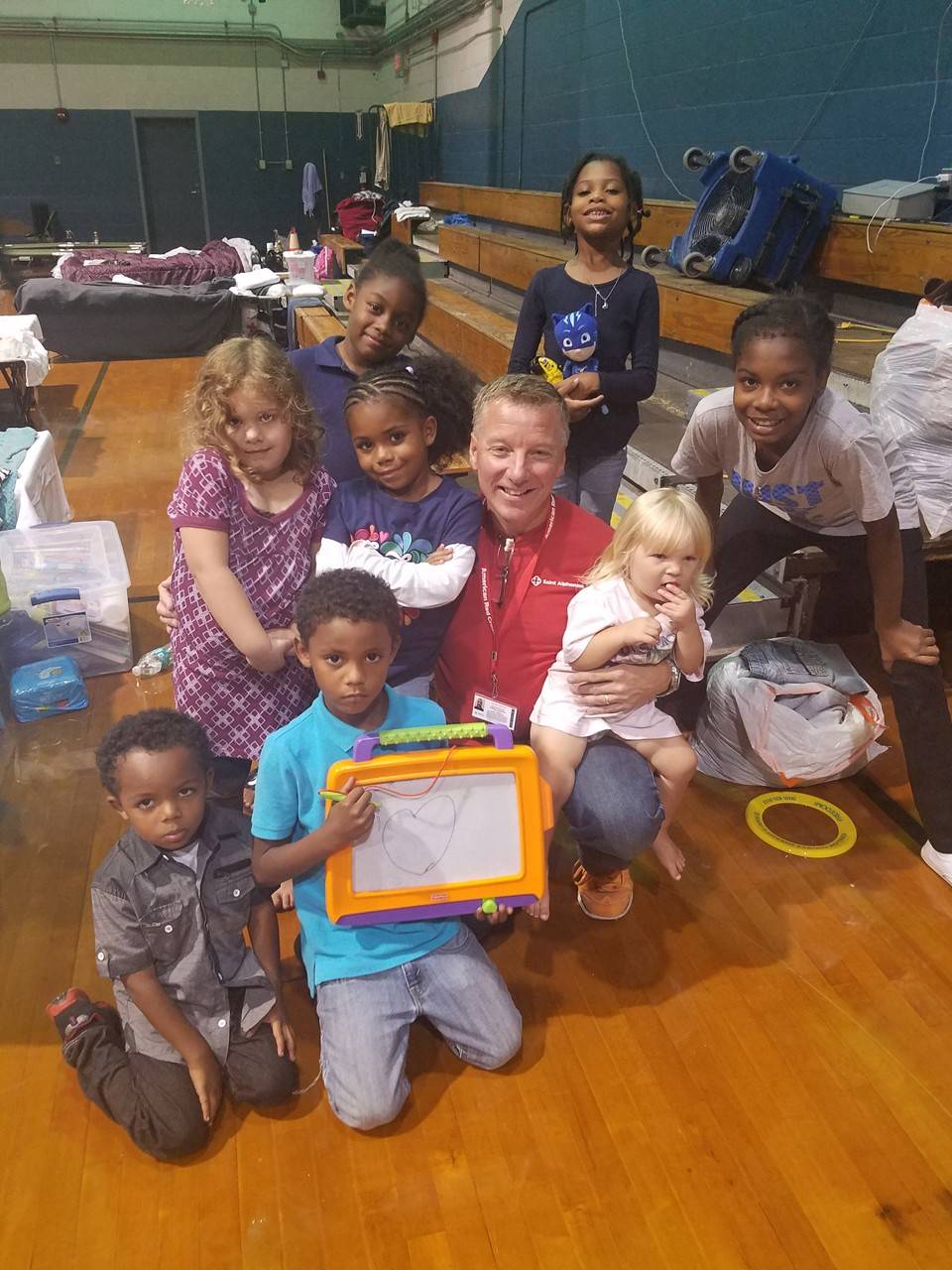 Surrounded by the devastation left behind by Hurricane Florence, it was a single act of kindness that brought Idaho Red Cross volunteer Jody Goodman to tears.

Goodman was working in a Red Cross shelter at a middle school in North Carolina when a young man staying there quietly put someone else’s needs ahead of his own. Someone that man didn’t even know.

“One of the ladies needed her feet elevated,” said Goodman, a registered nurse at Saint Alphonsus Medical Center in Nampa. “She had heart issues and so he walks up and he grabs his own pillow off his own bed, lifted her feet up, put it under her feet, and he said ‘Now you leave this under your feet. We have to take care of each other.’”

This was Goodman’s first Red Cross deployment, and was a bit of a whirlwind at that. He is a member of the Medical Reserve Corps, a national network of volunteers organized to improve the health and safety of their communities. On a Thursday morning, reserve corps members got an email saying that the Red Cross needed nurses willing to deploy to Hurricane Florence. Goodman responded quickly, and within an hour, got a call back laying out what he needed to do next. By the following Tuesday he was on a plane bound for Raleigh Durham.

He was first assigned to a shelter in Jacksonville, N.C., where he and his Red Cross colleagues were greeted warmly.

“To see the looks on some of their faces when they see us walk in there with our vests on and it’s like ‘Oh, we’re going to be good now that the Red Cross is here. We have help,” he said.

He and his partners tended to the shelter residents’ medical needs. This involved getting prescriptions refilled, dressing wounds and helping them with their CPAP machines. It also meant setting up cots, retrieving blankets and doing whatever else was needed, whenever it was needed.

“The first three days that I was there I got maybe six hours of sleep,” he said. “We were working 12-hour shifts but of course if you’re there and the need’s there you stay up and you do what’s best for the clients. We would do whatever it took.”

A few days later that shelter closed. Its population along with residents from another shelter moved to a middle school 40 minutes away in Sneads Ferry. There his work continued, much of it centered around children and families.

“The kids were the hardest part, to see what they were going through,” Goodman said.

“Some were homeless, some of them didn’t have any family, any friends, anybody in the area they can stay with, so until (crews) come in and start fixing up the apartments they were pretty much going to be in the shelter.”

One of their clients was a mother of five, Goodman said, and the shelter staff did whatever they could to help her out.

“Everybody would chip in and keep an eye on her kids,” he said. “I would have one of them … I would be walking around and feel this little hand reach down and grab my hand, and all of a sudden I had this little shadow that was following me. That totally changed the hours, the sleeplessness and it made everything at that point just worthwhile.”

After nine days in North Carolina, Goodman is back to work in Nampa but says there is still plenty of work to be done on the coast.

“Now the rebuilding starts,” he said. “All these people need to restart their lives and find places to go to, and kids need to get back into school and it needs to start getting back to the norm.”

Goodman, who donates blood regularly and taught a Red Cross CPR class many years ago, said he’s begun talking to other nurses at Saint Al’s about his deployment, encouraging them to volunteer for the Red Cross as well.

Would he deploy again? It doesn’t take Goodman long to answer.

“In a heartbeat. I wouldn’t even blink,” he said.

“It goes beyond me. I have my family, I have my friends and I’m in my own little world. And to step out of that … to travel 3,000 miles away, clean across the United States, and help somebody in that situation is just a good feeling. At the end of the day you say ‘I did something that made a difference.’”