Three years after stroke, Boise teen graduates thanks to generosity of blood donors 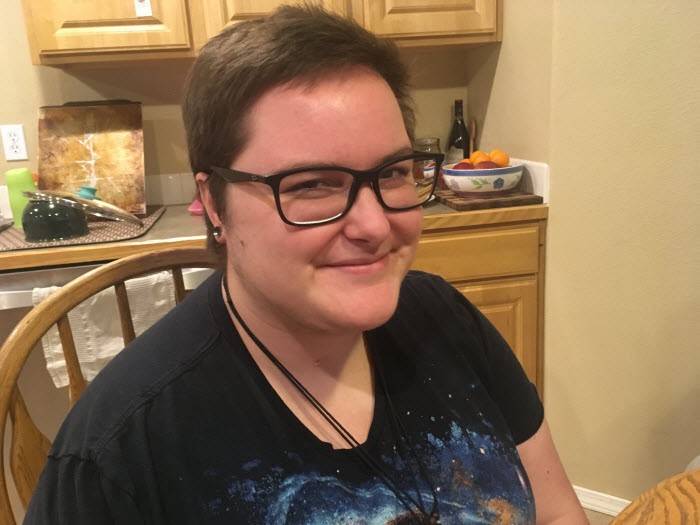 In May, Hannah Anderson walked across the stage at the Mountain View High School graduation ceremony in Boise and received her high school diploma, an otherwise simple act that would not have been possible without the generosity of Red Cross blood and platelet donors.

Just three years earlier, Hannah, who was 16 at the time, was at her friend’s house enjoying a birthday party when she started feeling ill. She complained of a terrible headache and called her family to come pick her up. Her older sister arrived a short time later and immediately knew something wasn’t right.

“She called us and said you guys better get over here,” Hannah’s father Ryan Anderson said.

Hannah’s family took her to the emergency room where she was fading in and out of consciousness. Medical staff began tests and diagnosed Hannah with acute immune thrombocytopenic purpura, an autoimmune disorder that causes her white blood cells to destroy her platelets, making it difficult for her blood to clot. What she thought was a headache was actually bleeding in her brain and essentially a massive stroke.

Hannah’s platelet count was so low it was undetectable.

“Essentially her blood stopped traveling through her veins and just started perfusing out her tissue,” Ryan said.

By 4 a.m., just six hours after she had been hanging out with her friends, Hannah was undergoing brain surgery.

“It’s a good thing we took her to the hospital rather than letting her sleep it off or she probably never would have woken up,” her dad said.

But that was just the start.

Over the next three weeks, Hannah’s platelet counts remained extremely low despite getting daily infusions. Doctors decided the next step was to remove her spleen because that’s where the platelets were getting destroyed. But that surgery wasn’t possible until they were able to get her platelet count up, fearing that Hannah, who was in a medically induced coma, would bleed to death on the operating table.

Finally on Aug. 20, three weeks after she entered the hospital, Hannah’s platelet count was high enough that doctors felt like they could attempt surgery. The splenectomy was successful, and her body was no longer destroying her platelets.

Hannah remained in a coma for another two weeks, and when she awoke, a long, tedious recovery awaited her. After spending so much time being bed-ridden and in a coma, Hannah’s brain and muscles were no longer communicating, and she was unable to do even simple tasks like eating or sitting up.

In October, shortly after her 17th birthday, Hannah was transferred from St. Luke’s in Boise to Primary Children’s Hospital in Salt Lake City for nine weeks of in-patient rehabilitation.

After they arrived in Salt Lake, Ryan and his wife were taken on a quick tour of the facility. When they got done and returned to Hannah, they were met with quite a surprise – Hannah was doing an assessment with the speech therapist and spoke one word.

“That was the first time we had really heard her speak since July,” Ryan said.

“It was happy and kind of heartbreaking all at the same time. Here’s your now 17-year-old daughter, and we’re getting excited like you do with a 1-year-old when they first learn how to talk.”

While that first step was a big one, Ryan remained determined to get his daughter all the way back to where she once was, both mentally and physically.

“When we first checked in to the hospital they asked us ‘what are your goals for therapy’ and I said ‘I want her to walk out the door like she walked in back in July,’” Ryan said. “And they looked at me like I was one of those unreasonable crazy parents, and I thought ‘what would you expect if your child was here.’”

After weeks of physical and occupational therapy, Hannah learned how to walk again, finally returning home just before Christmas. She immediately set her sights on going back to high school the next semester.

“Which I thought was a little crazy,” Ryan said. “I thought ‘you need to focus on recovering’ and she said ‘what I need to do is get back to my normal life and be with my friends,’ which was very true. And I think just being surrounded by her peers and getting back to normal life really helped her in her recovery process.”

Now, nearly three years later, Hannah has her diploma and a bright future ahead.

Though she graduated a year behind her classmates because she lost a semester while in the hospital and then returned part time while continuing her rehab, her friends attended graduation to watch her take the stage.

“I was just glad to be done,” Hannah laughed.

During the three weeks following her stroke Hannah received 87 units of platelets and 11 units of whole blood, all of them critical to her survival.

“Without Red Cross donations I can say with 100 percent certainty that she would not be alive today,” Ryan said.

Ryan, who works at Idaho Power, has been donating blood since high school, following the example set by his parents. He has given 120 units and made his first platelet donation on Aug. 20, 2016, just hours before Hannah’s splenectomy at St. Luke’s.

“I tell people you never know when you or someone you love may need it,” Ryan said.

“My goal after Hannah returned home from the hospital was to donate an amount equal to what she received. I’ve almost reached my goal and feel like I have repaid the donors who helped save her life.  I look forward to continuing to donate for many years to come.”

The recipient of so many donations, Hannah has also given blood, donating at a school drive just a few months before her stroke.

This fall Hannah will start school at the College of Western Idaho. And she hopes to get her driver’s license – just another goal made possible by the generosity of strangers whose blood and platelets kept Hannah going during those difficult weeks at St. Luke’s.

“Thank you just doesn’t seem like enough,” Ryan said. “She wouldn’t be here without the generosity of complete strangers.”

Become a blood or platelet donor today to help others like Hannah.

A blood donation takes about an hour from start to finish, but the actual donation itself takes only eight to 10 minutes. Platelet donations take about two hours.

Donate blood and give the gift of life