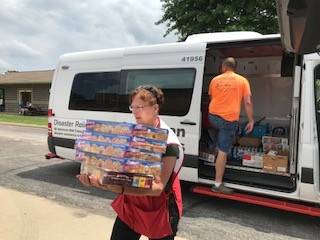 Six Red Cross shelters are now open across the state of Missouri and adjoining Illinois counties* in response to flooding and tornado damage. Efforts are ongoing in coordination with local officials to evaluate and determine needs of residents with evolving flood conditions in the state.

The previous shelter at Spark Ministries Church, 40842 Illinois Route 3, McClure, IL is no longer on standby and the team has moved to the new location to support the Cape Girardeau shelter that opened at 2 p.m. today.

To date, in Missouri and adjoining Illinois counties, nearly 22,200 meals and snacks have been served and nearly 470 disaster workers including volunteers and staff are assisting in the response. In addition, in Calhoun County, Illinois, where flooding is occurring, the Red Cross has continued distributing meals in the area to the communities of Brussels, Kampville, Hardin, Hamburg, and Michael.

The following shelters were previously opened and remain open:

One shelter remains open as a result of tornadoes:

*Note – The Eldon shelter and Jefferson City shelter consolidated into the Russellville location.

Receiving hours are 9 a.m. – 5 p.m. seven days a week.  Items being accepted are new items needed for individuals who are recovering and moving into a new home. This is being overseen by the Adventist Disaster Response.  Please note, that many of the local organizations have received significant amounts of donations of used items including clothing items already