Remembering the work of a Red Cross treasure

Remembering the work of a Red Cross treasure 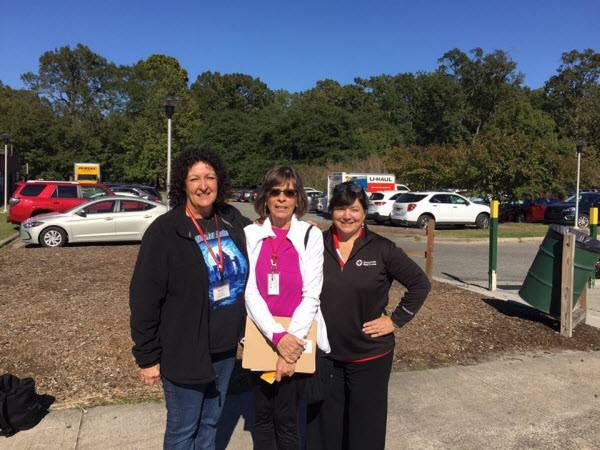 For Sandy Cain, Montana volunteer Leann Johnson epitomized what it meant to be a Red Crosser.

“She’s the kind of person that if Clara Barton was in the same room, she would have wanted to talk to Leann,” Cain said.

Cain worked with Johnson for close to a decade, serving with her on several disaster operations, and admiring her wit, her passion and her ceaseless commitment to helping people when they needed it most.

In October, the retired school teacher passed away at the age of 67 in her home in Missoula after 20 years of Red Cross service.

“She was a hero to me, and I feel incredibly blessed that I got to know her and laugh with her,” said Cain, now a regional volunteer engagement lead in Oklahoma and the regional disaster officer’s volunteer partner in Idaho and Montana.

“She was just a treasure. She was this hilarious spitfire. I just adored being in her presence.”

Cain said she loved hearing Johnson’s Red Cross stories, stories that often revolved around Johnson doing whatever it took to serve the mission and take care of people.

One story really resonates with Cain.

Johnson was on disaster relief operation — Hurricane Katrina, Cain believes — and the sun was beating down as Johnson stood outside a shelter with a huge line of people. Cellphone in hand, Johnson began making her way through the line, one by one asking folks if their families knew they were safe and if there was anybody they needed to call.

“Just hearing her talk about that and the passion that she had for helping people because that’s such a huge psychological factor to feeling safe, knowing your family’s OK and your family knowing you’re OK,” Cain said.

“It was just another day for her, because that’s what she did. It was amazing the ease at which she spoke about this incredibly important work that she did. I felt like a little kid when you’re in kindergarten and everybody’s on the floor and you’re cross-legged and listening to your teacher. She would tell these stories and I was just so in awe of her hard work and her dedication. She lived it.”

During her two decades of service, Johnson filled many roles including as a caseworker for the International Services Restoring Family Links program, duty officer, recovery casework manager and as a national expert on reunification.

She is credited with helping thousands of families reconnect following disasters.

“Leann was very well known across the entire Red Cross for her amazing work in reunification,” said Colleen Tone, regional disaster officer for Montana and Idaho. “She was one of the most remarkable volunteers I’ve ever had the pleasure of working with. She was always asking, ‘what can I do for you and how can I best support the mission?’”

“She was super fun and kind of sassy, but when it came down to it, she was a no-bull individual who got the job done,” said Tone, who worked with Johnson for 13 years.

Johnson was the casework manager for the Kamiah wildfires in Idaho in 2015 when 75 homes were destroyed and played a key role during a plane crash in Butte in 2009. Tone was serving as duty officer when word of that crash came in, and Johnson jumped in to take over that role so Tone could get on the road and get on site.

When the situation was tough, Johnson always knew what to do.

Cain remembers getting in a bind during a disaster response operation. Johnson was her first call.

“I remember walking out into the parking lot and calling Leann and explaining the problem,” Cain said. “And I remember her having this very matter-of-fact explanation to me — that people are more important than the policies. That the heart of the matter was taking care of people and not letting the policies get in the way of doing the right thing. That had such a profound effect on me. She was always that person to me.”

After spending six years in Missoula and a couple years in Billings, Cain lives in Oklahoma now. When her grandmother passed away a year ago, Cain opened her mail and found a card from Johnson.

“That just speaks to Leann,” Cain said. “She was authentically caring. She just was very genuine.”

Johnson is survived by her husband, Kent, who is also a Red Cross volunteer. Together, as part of the Disaster Operations Volunteer Escapees program, they drove their RV to disaster locations, deploying nearly 30 times.

The family is planning a memorial service this spring.

Tone and Cain said Johnson can never be replaced.