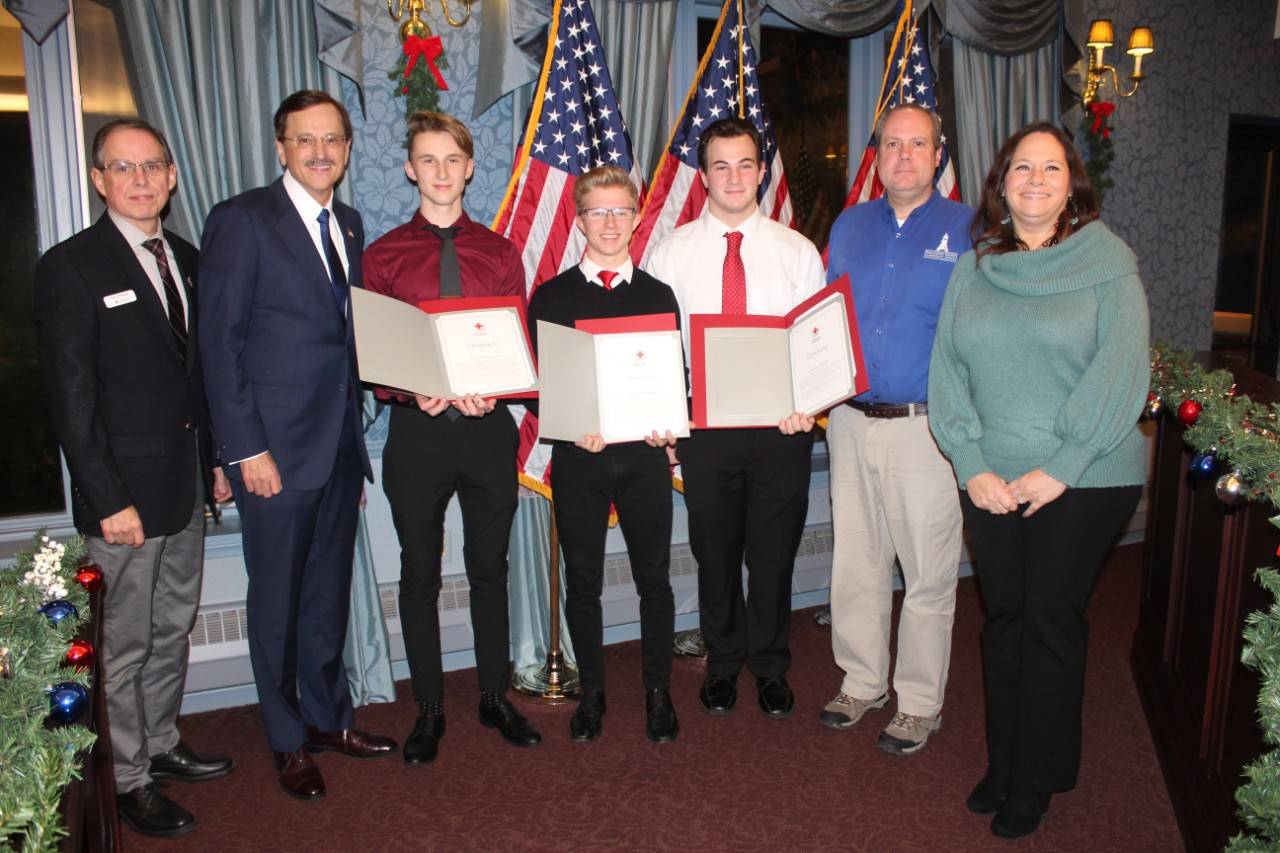 "Our chemistry is extraordinary. Everyone knew their part like it was the back of their hand. It was a team effort."

Four lifeguards trained by the American Red Cross have been honored for saving a man’s life. Ryan Grimesey, Andrew Bachie, Nathaniel French and John Porch jumped into action after finding a man lying unresponsive on the floor of the Middleburg Heights Recreation Center in July 2018. They called for EMS and performed CPR with an AED until medics arrived.

The lifeguards were honored at a Middleburg Heights City Council meeting with the American Red Cross Lifesaving Award.  It is one of the highest awards given by the Red Cross to an individual or team for saving or sustaining a life by using skills and knowledge learned in a Red Cross course.

The team was on duty at the Middleburg Height Community Center on July 5th when a call came across the radio that a man was lying on the floor in the locker room.  All 4 moved in, each handling a specific aspect of the lifesaving techniques they had been trained for with precision.

Ryan Grimesey said they all knew what they needed to do. “I have been training with Andrew, John, and Nathaniel for a few years now, and our chemistry is extraordinary, as are each of them. Everyone knew their part like it was the back of their hand. It was a team effort, and they were the best team I could have asked for.”

We often hear stories of “heroes” who step in and handle a situation in a way many of us fear we would not have the confidence to do, and these young men were no exception, expressing humility about their efforts; each crediting the other. “It’s easy to have confidence in your actions when you are surrounded by great people” said Ryan.

Nate French concurs: “this whole situation was held together by my coworkers. The people I worked with are not only well qualified and prepared, but level-headed and team players as well. Ryan, John, and Andrew all kept their composure and acted efficiently. I wouldn’t have asked for anyone else to be on a team with.”

And it is preparedness that is key. All four were trained through the extensive programs available through the American Red Cross, like the Water Safety and Lifeguarding courses that gave them the knowledge and skill to deliver critical care services like CPR, first aid and AED administration for situations such as this.  Once in the training room, the lifeguards saw what was happening, and just did what needed to be done. “We communicated with each other on what we were doing and instructed one another on what should happen next,” said Nate.

“It’s gratifying to know that Red Cross training played a part in helping save a life,” said Tim O’Toole, American Red Cross Regional Disaster Officer, who presented the awards during the ceremony on behalf of the American Red Cross Board of Governors.  “The swift and decisive actions of these four lifeguards exemplify the Red Cross mission to help people prevent, prepare for, and respond to emergencies.”