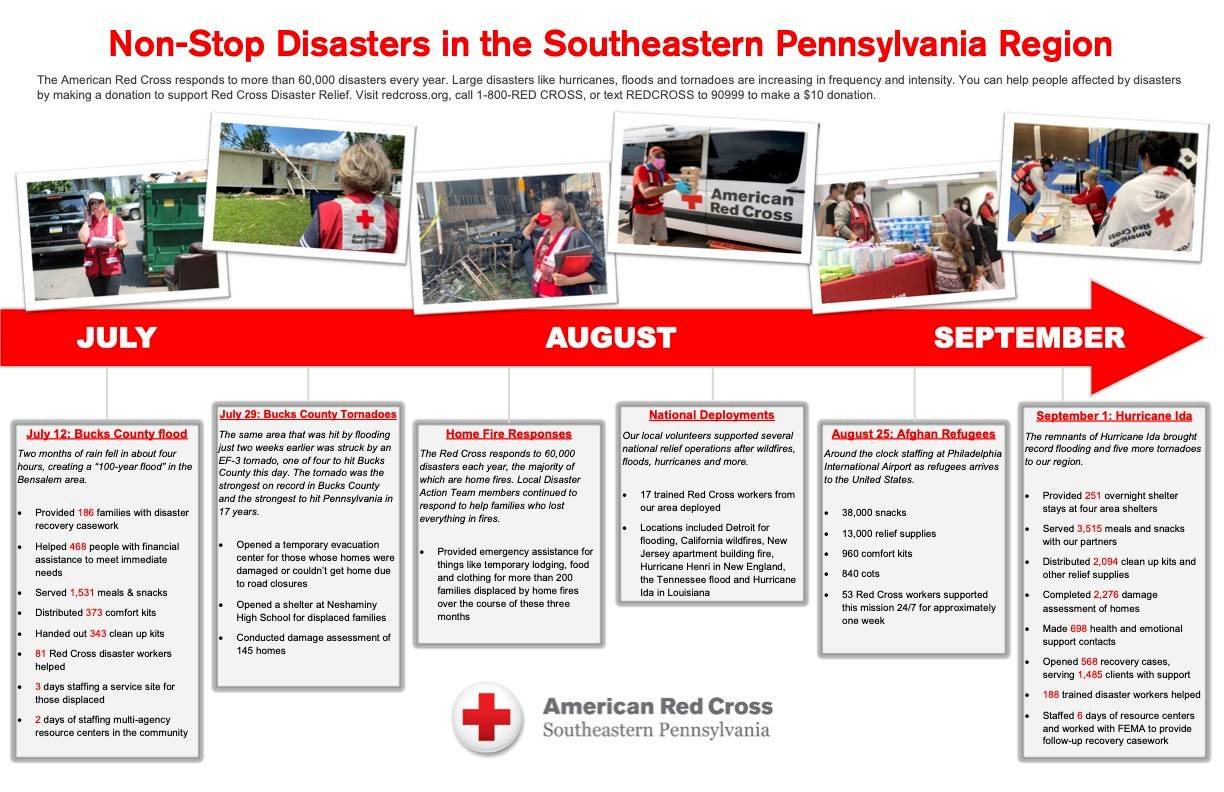 The American Red Cross responds to more than 60,000 disasters every year. Large disasters like hurricanes, floods and tornadoes are increasing in frequency and intensity.

The past three months have brought some of the wildest weather we’ve ever seen in Southeastern Pennsylvania. It started back on July 12, when two months’ worth of rain fell in about four hours over Lower Bucks County and Northeast Philadelphia, creating a “100-year flood” in the Bensalem area.

The Red Cross responded, opening an evacuation center and service site to help those affected. More than 80 Red Cross disaster workers provided nearly 200 families with temporary lodging after the storm, and almost 500 people with disaster recovery casework. The Red Cross and our partners served more than 1,500 meals and snacks, distributed hundreds of clean up kits and other relief supplies.

Just two weeks later, this same area was struck by an EF-3 tornado, the strongest on record in Bucks County and the strongest in the state of Pennsylvania in some 17 years. It was one of four tornadoes to touch down in Bucks County on July 29. Again, the Red Cross was there, opening a temporary evacuation center for those who couldn’t get home due to storm damage and road closures and an overnight shelter for families whose homes were damaged.

In addition to responding to these large local disasters, Red Cross volunteers from Southeastern Pennsylvania also answered the call to help our friends and neighbors around the country as they dealt with their own large disasters, from flooding in Michigan and Tennessee, large fires in New Jersey and wildfires in California, to Hurricane Henri in New England and Hurricane Ida in Louisiana.

And our local Disaster Action Team members continued to help after the most frequent disasters – home fires. From July 1 to September 30, Red Cross disaster volunteers provided emergency assistance for things like temporary lodging, food and clothing to more than 200 families who lost nearly everything to home fires in Philadelphia, Bucks, Chester, Delaware and Montgomery counties.As the summer began to wind down, the Red Cross once again found itself serving to alleviate suffering from another humanitarian crisis. Refugees from Afghanistan were being transported to the U.S. and were arriving at Philadelphia International Airport. More than 50 local Red Cross volunteers supported this mission to serve 24/7. At the airport, they provided tens of thousands of snacks and relief supplies, nearly 1,000 comfort kits to weary refugees arriving to start their new lives in the U.S.

At the same time, powerful Hurricane Ida made landfall in Louisiana and began its move north towards Southeastern Pennsylvania. As it arrived the evening of September 1, torrential rain and tornadoes once again struck our region. The Red Cross opened shelters for people whose homes were flooded or damaged by the tornadoes, providing more than 250 overnight shelter stays.

In the days and weeks that followed, Red Cross disaster workers served more than 3,500 meals and snacks with our partners, distributed more than 2,000 clean up kits and other relief supplies, and conducted damage assessment of more than 2,200 homes, finding nearly 1,000 of them with major damage or destroyed.

Helping people prepare for, respond to, and recover from disasters has been at the heart of the Red Cross mission since our founding. It is through this lens that we see climate change as a serious and devastating threat for the 21st century.

Our seven Fundamental Principles — humanity, impartiality, neutrality, independence, voluntary service, unity and universality — are at the very root of our mission to prevent and alleviate human suffering, and these principles call on the Red Cross to address climate change and the severe impact it has on our communities.

Giving Tuesday: Give Something that Means Something for People in Need
.type=article.p=1
View All
/content/redcross/en/local/pennsylvania/southeastern-pennsylvania/about-us/news-and-events/news/july-sept-disasters