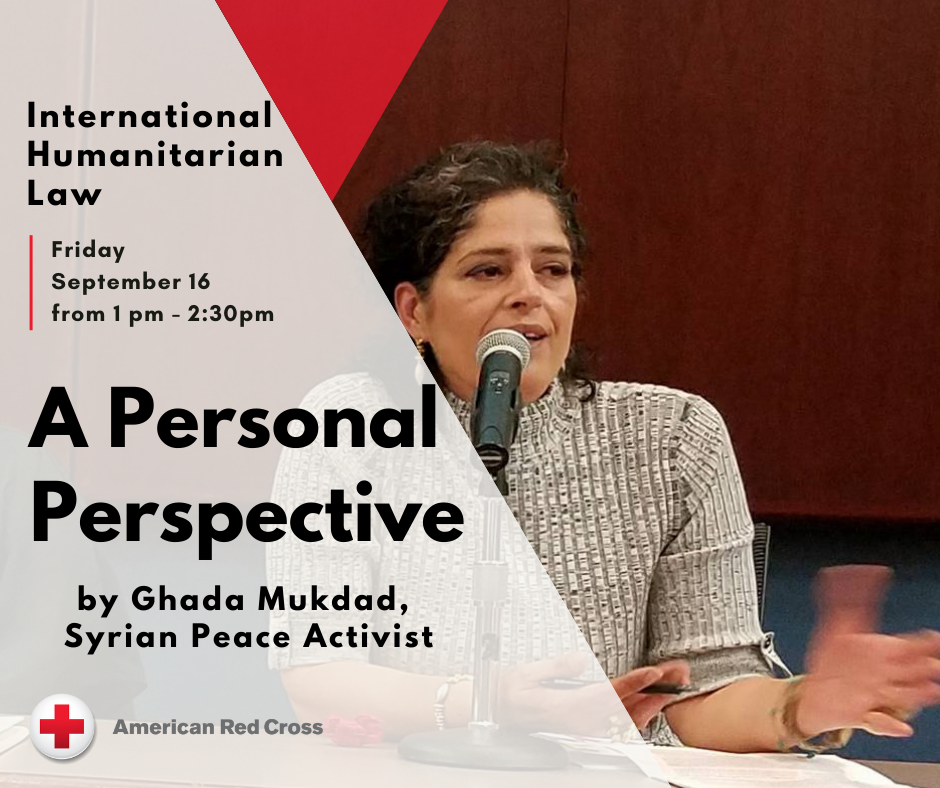 Ghada Mukdad, a Syrian immigrant, has volunteered with the American Red Cross for the past 3 years. During that time, she worked to customize a powerful presentation on International Humanitarian Law. The presentation delivers the same compelling message stemming from the 1949 Geneva Convention but with the added depth and personal understanding that comes from an experience nobody should ever have to face.

Mukdad was visiting the United States in 2011 with her family when the unthinkable happened, war broke out in her home country of Syria, plunging the nation into an ongoing civil war. Since that time, more than one-third of the nation has fled and become refugees. Stranded in the United States, weeks turned into months and months turned into years. She has not returned to her homeland since the war began.

"We never thought we would stay here that long," says Mukdad, recounting her story of escape and survival.

Mukdad, her husband and three boys eventually settled in Dallas, Texas. Today, she spends much of her time volunteering with the American Red Cross, helping reconnect lost family members and teaching workshops on International Humanitarian Law. She draws from her own displacement experience to help express the reality of what millions of refugees are going through globally.

One of her focuses has been assisting Syrian refugees and immigrants navigate the complicated immigration system so that they can settle in their new lives. Most refugees want to obtain their work authorization first and foremost, regardless of their pending legal status. It can be difficult.

Mukdad struggled to find her footing in the U.S., adapting to a new country, people, culture and language. At times, it felt like she "lost many things," including her identity, home and place in the world.

Mukdad’s husband was an oncologist for 23 years in Syria before settling in the United States. He has not been able to return to his profession due to authorization barriers. His previous experience doesn’t factor into his ability to practice in the U.S.

The obstacles she and her husband faced didn’t deter Mukdad’s drive to help others. She began volunteering with the Catholic Charities in Dallas to acquaint herself with her new country. Mukdad soon became interested in assisting Syrian families and women that might also be experiencing the same obstacles she was facing.

She helps Syrian women escape domestic violence through divorce. Many of these same women also have a difficult time restarting their careers. In Syria, they were doctors, educators and engineers. Unfortunately, navigating the certification process to transfer their skills and experiences into a tangible career in the U.S. is challenging. To help, Mukdad connects them to other members of her community who can evaluate their skills, experiences and degrees and then help them start over.

While some are hesitant to join workshops, Mukdad stays connected with her community digitally through groups on Facebook, WhatsApp and Instagram. There, they share information on what’s happening back home, in their new communities, tips on navigating the immigration system, divorce obstacles, connecting with religious leaders and volunteer opportunities to get out and learn about their new environment.

“I want people to feel that the people who migrate to the United States, they are people like you, like any other people, a human being,” Mukdad says. “The schoolteachers, all the school body, they are amazing, giving people, welcoming people. These are the people whom I met and I trust and who helped me to stand over again.”

Mukdad later returned to Washington again at the request of Johnson. This time she was there to participate in conversations about the Syrian refugee crisis in 2015. This came after she petitioned the United States to encourage peace in Syria. Her petition was supported by Southern Methodist University. In Syria, Mukdad was highly involved in her community. She ran for Parliament as an independent candidate, championing issues concerning women, families, poverty and peaceful coexistence. She highlighted the need to end the sectarian violence and religious intolerance that was slowly chipping away at the lives of Syrians. Unfortunately, the Syrian regime impeded her efforts. With her safety eroding before her eyes, she fled to avoid persecution.

Mukdad worries that her participation in peace negotiations and initiatives to help Syrians in the U.S., Syrian authorities will detain her if she tries to return.  Due to her peace work, she was also invited to join other Syrian women in Geneva, Switzerland, but she has been unable to leave the U.S. due to her still pending legal status. While Mukdad has had to fight for her identity and place in the world, her experience in the U.S. has been a good one, finding strength in her community, neighbors, and the kindness of strangers. She shared that her volunteering with the Red Cross has helped.

“I love volunteer work so much, and my next step I feel that I will also work with these issues with American Red Cross,” Mukdad says, highlighting her eagerness to help Syrian women, immigrants and refugees.