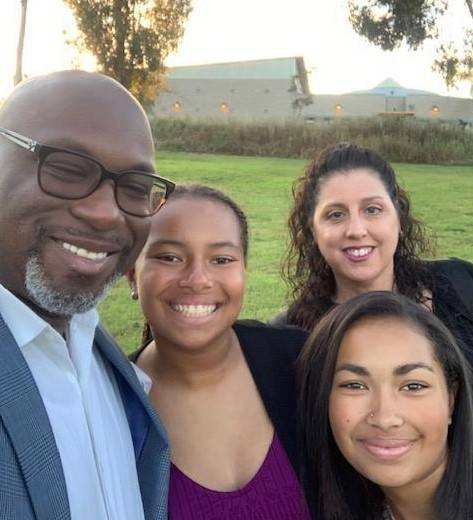 After experiencing a home fire in 2017, Donald Canteen and his family were helped by the American Red Cross of San Diego/Imperial Counties. Since then, Donald has engaged with the local Red Cross to become more prepared than ever, and help fellow community members do the same.

Home is meant to be a place of refuge and comfort. However, in just a moment, this sanctuary can come crumbling down. Donald Canteen and his family found this out first-hand when they experienced the heartbreaking loss associated with a home fire.

On September 4, 2017, Donald was enjoying a day off with his wife. Suddenly, the smell of smoke filled their home. When he went to investigate, Donald discovered the dryer in the garage was smoking and ablaze.

Immediately, Donald’s wife called 911 while their dog barked in fear. In an attempt to save his newly-purchased vehicle, Donald opened the garage door; unfortunately, this allowed more oxygen to feed the already growing flames.

Both Donald and his wife evacuated their home with their dog and nothing else. As multiple fire trucks arrived, their treasured possessions – including irreplaceable family photos – continued to burn. This was Donald’s childhood home, purchased from his parents in 1999.

Feeling helpless, Donald wanted to step in and assist in any way he could; however, the fire had collapsed overhead power lines, exposing bystanders to potentially hazardous electrical shock. Donald knew the situation was solely in the hands of the fire department. After Donald, his wife, and his neighbors were evacuated to the end of street, all they could do was watch, wait and hope for the best.

Amidst this chaotic scene, volunteers from the American Red Cross showed up to help. A Red Cross Disaster Action Team (DAT) volunteer provided the Canteens with water. He provided information on next steps, and walked the Canteens through questions like where their family would stay that evening and if anyone else remained in the house. This question reminded Donald’s wife of their children’s beloved pet turtle, Borris, who remained in the home. Thankfully, the fire department ran in and retrieved him.

Donald’s home was not entirely lost, but even with the prompt response of the fire department, there was severe damage. As a result, Donald’s family lived with his in-laws for over a year. While they were blessed to have family nearby, they knew this was not always the case for other families affected by disasters.

As a result of his experience, Donald has engaged with the Red Cross to become more prepared than ever. His family has a preparedness plan for what to do if a fire occurs and Donald installed additional smoke alarms in his home. He cleans the vents in his home once a quarter and takes time to spread awareness to his family and friends on how to be better prepared for a home fire.

It is important to take time to ensure your family is prepared for a home fire. Make fire safety a priority, develop an home fire escape plan and take advantage of the many home fire preparedness resources and tools available at redcross.org/homefires.

Smoke alarms are essential in preventing home fire deaths and injuries. Working smoke alarms increase the chance of survival in a home fire by 50% and an emergency escape plan further increases these odds. Residents in need of smoke alarms can register online at soundthealarm.org/sandiego to request a free smoke alarm installation visit from Red Cross volunteers.

For more information about the Red Cross or to become a volunteer, visit redcross.org.