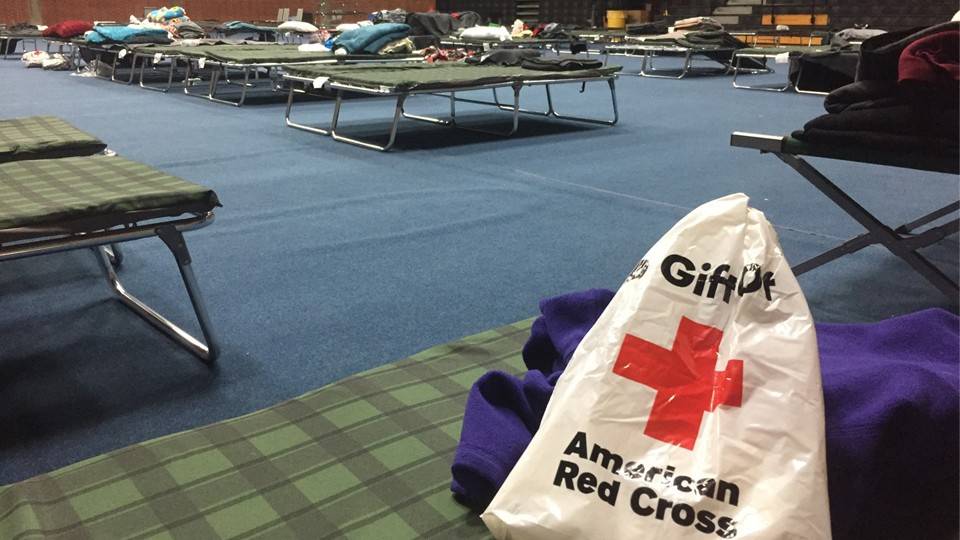 ”After all is said and done, even though the fire was very devastating in those first few months, we reminded ourselves that we were blessed that no one had died. We saw and felt the love, kindness, and generosity of so many people.”

Between December 7-14, 2017, the Lilac Fire burned 4,100 acres, destroyed 150 structures, and forced 44,000 households to evacuate in San Diego’s North County area. Along with partners, the American Red Cross of San Diego/Imperial Counties was there to provide help and hope to evacuees in multiple Red Cross shelters during the immediate response period. Red Cross Case Workers also assisted with long-term recovery efforts for those affected by the fire. Here is one of those stories:

Sandra Ruckman and her husband Russell Ruckman were on their way home from grocery shopping in downtown Fallbrook when they received a phone call. It was a neighbor telling them that he saw smoke and fire coming towards their neighborhood. They drove quickly towards the mobile home park where they had lived for the past 11 years, and when they came down Old Highway 395 they could see it, too.

Driving into the park, they were stopped by a police officer. ”He told us, you have ten minutes,” Sandra said. By the time they arrived to their house they were down to six minutes. They grabbed the computer, important papers, some medication and got out as quickly as possible. As they left the house the police drove by, blaring out on megaphone, ”Get out now! Leave this minute!”

Rushing to their car, Sandra and Russell noticed that the next door neighbors’ car was still in the driveway. Knowing that both husband and wife were recovering from hip surgery and usually took an afternoon nap, Sandra and Russell realized that they might still be sleeping. They were. Luckily, Sandra and Russell managed to wake their neighbors up, and they all got out before the fire came too close. ”The wind was so strong,” Sandra said. ”When we left the fire had caught onto the trees that were leaning over the road.”

The next morning there was an aerial overview of their mobile home park in the newspaper. Even though they were seeing it in print in front of their very eyes, it was hard to believe. A total of 75 homes were destroyed in the fire. On the other side of Sandra and Russell’s street, all of the homes except one burned down. On their side of the street all of the houses were still standing, except one. Theirs.

”We lost a lot of things,” Sandra said, ”but we tell ourselves all of the time, they´re just things. When you lose things to something like this, to a fire, you grieve at first but after a while that loses its value.”

But, some things were invaluable. The piano that her mother bought her when she was in second grade is one of those things. Sandra’s teacher at that time said that Sandra had musical talent and her mother wanted to encourage it. ”I think she worked five years to pay off that piano,” Sandra said.

And with Christimas around the corner a lot of things that were meant for someone else were lost as well. Sandra does not consider herself tech savvy, but last year prior to the Lilac Fire, she and her husband managed to buy all of their Christmas gifts online. Crafts for the oldest grandchild, dolls and a scooter for the youngest. Sandra and Russell’s two daughters were each going to get a cross necklace with a small diamond in it. ”They were all wrapped and under the Christmas tree,” Sandra said.

A few days after they were evacuated, Sandra and Russell went to the library in Vista. They had heard that the American Red Cross and several government and community partners were going to be there to help those affected by the fire. While Sandra tried to get driver’s licences, birth certificates and their marriage certificate in order, Russell talked to a representative from the Red Cross. Russell was offered financial assistance, but he declined. Partly due to pride. Partly because he figured that other people might need it more. As the days went on, Sandra and Russell both realized that the money really could be of help. They would not get anything from their insurance company for a while and they had no credit cards to fall back on since all of them were lost in the fire.

Sandra and Russell felt as if they had missed their chance with the Red Cross, but as Sandra explains it, “They must have heard our prayers.” A Red Cross case worker called to follow up with Russell to check on their recovery planning and asked if they might need the money after all. ”That was a lifesaver for us in so many ways," Sandra said. ”We had no idea how to get through the first months. But that got us back on our feet and got our hopes up.”

When Sandra and Russell eventually got their insurance money they decided, after careful consideration, to rebuild on their lot. The last week of July, their new home was ready. During the move Sandra told the movers about the piano her mother had bought her. And, coincidentally, the owner of the moving company had a son who wanted to sell a keyboard. It sounds just like a piano, and Sandra is now playing again. ”I actually think that the last bit of the Red Cross money went toward that piano,” she said.

Today, Sandra and Russell are back on their feet and live, what they call, an uncluttered life. They have bought most of their furniture at Goodwill or at estate sales, and their community and Riverview Church have contributed greatly. Being in a situation of losing everything, Sandra found it hard to ask for things. But she didn’t have to ask. Every now and then a friend from church asked her what she needed or missed the most, and when she least expected it, they threw Sandra a surprise shower. She got a collander, a bake oven, utensils, recipes and a lot of other necessities. They had thought of everything.

”After all is said and done, even though the fire was very devastating in those first few months, we reminded ourselves that we were blessed that no one had died. We saw and felt the love, kindness, and generosity of so many people,” Sandra said, as she talked about how their friends, their church and the Red Cross have helped them over and over again.

The American Red Cross prevents and alleviates human suffering in the face of emergencies by mobilizing the power of volunteers and the generosity of donors. Please visit redcross.org/volunteer for more information on volunteering with the Red Cross or visit redcross.org/donate to make a donation.