“There's so much opportunity to learn new skills or fine-tune the ones you already had.”

Everyone has a refuge, a place where they can escape the grind of each day. Some take up running, others turn to drawing. Sandy Meditz volunteers. For Sandy, volunteering allows her mind to take a break from all the outside noise.

In 2008, Sandy sought out volunteer opportunities with the American Red Cross of San Diego/Imperial Counties. At the time, she had limited availability between her part-time job and picking her grandkids up from school, but she wanted something that would take her “away from life’s details.” The Red Cross was that missing puzzle piece Sandy had been looking for.

Sandy’s work in Disaster Services has been described as nothing less than outstanding. As the Deployment Regional Lead, Sandy takes it upon herself to work long hours, evenings and weekends during disasters. During the 2018 hurricane season, she successfully deployed over 100 volunteers to support relief efforts. Sandy’s colleagues claim that disaster responses “would not be as successful without her contributions” and that she “makes our region shine.” 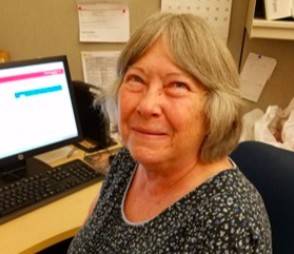 When disaster strikes, Sandy is the one to rely on to get people where they need to go. The act of deploying a volunteer is no easy task. Several details go into deploying volunteers to a disaster operation. Volunteers are chosen based on their qualifications and levels of training and expertise, as well as their availability and hardship codes (personal health status). Deploying volunteers involves numerous telephone calls, position searches, individual briefings and travel arrangements. When deploying people, Sandy’s got to be “rabbit quick,” because once a disaster hits, the positions fill up quickly.

When disaster strikes, it’s up to the region in which the disaster occurs to ensure their own volunteers are filling the appropriate positions. Then, if the disaster grows larger and more help is needed, disaster responder positions are opened to volunteers outside of the region. This could mean volunteers from neighboring regions or even volunteers throughout the state or potentially nationwide. So, if you’re waiting to be deployed, but don’t answer your phone when Sandy calls, she must go on to calling the next person. The thing to do is answer the phone.

Process is important during disasters, especially when Sandy and her team are getting volunteers out the door. Turning away eager volunteers is hard for Sandy, but it’s only when volunteer supervisors send the information to Sandy and her colleagues that local volunteers are eligible for deployment. Rather than heading into the office ready to deploy, the best thing to do is update your availability in Volunteer Connection, be patient, and pick up the phone when Sandy calls.

Thanks to her dedication and attention to detail, the San Diego Region has earned a great reputation on disaster responses all over the county. But since she began volunteering for the Red Cross, Sandy has graced more than just the deployment area of Disaster Services. In fact, she’s skillfully taken up a number of other various duties in Disaster Services. She’s worked in feeding, helped with training and even driven Emergency Response Vehicles (ERVs). While many would get whiplash with all these distinct responsibilities, Sandy, the “jack of all trades,” loves it. Before she retired, she worked as everything from a clerk typist to a waiter to volunteering as a caregiver and serving as a VFW (Veterans of Foreign Wars) member.

Sandy is thrilled with the many volunteer opportunities available to her and her fellow volunteers. “At the Red Cross, things are always changing, there’s no chance to get bored,” she says. “If you want to learn a new skill, something completely different, you can do that and if you're not happy, you can switch positions and learn other things. There's so much opportunity to learn new skills or fine-tune the ones you already had.”

With something for everyone, there’s no doubt you’ll find something you love to do. What better way to take your mind off things, just like Sandy?