Rainbow Sandals Founder Has Giving in His ‘Sole’ 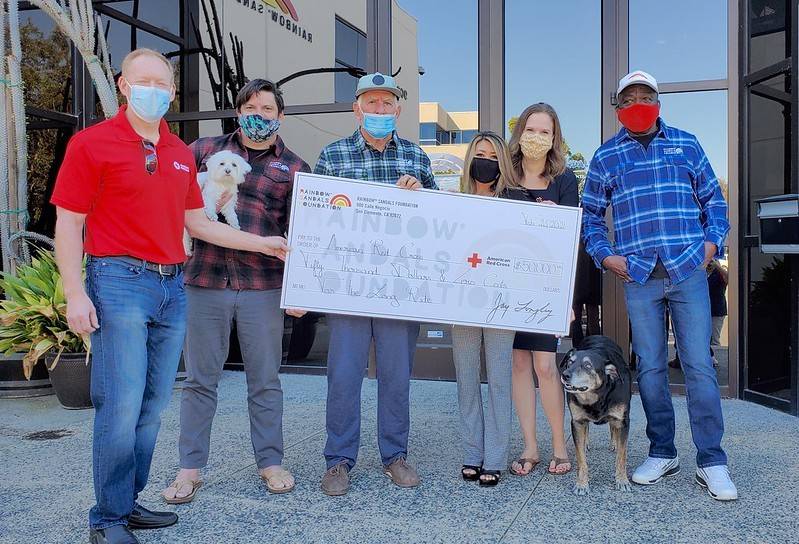 "Giving is the secret of life. It’s the most important thing.”

Rainbow Sandals founder Jay ‘Sparky’ Longley has philanthropy in both his soul and sole, he joked, as the long-time sandal manufacturer presented a $50,000 donation to the American Red Cross of Orange County.

“You guys are the best; a huge organization doing wonderful things all over the world,” Longley declared, as he acknowledged the 152 Red Cross Societies around the globe, and the work the Red Cross is currently undertaking in Texas following winter storm Uri.

“When I started, I never had the money or the time to help anybody else, but now I’m in a position to, and I really like giving back,” Longley continued. “I try to help everyone a little bit. I figure everybody needs a little help and it’s fun to give. I just do a little bit – and hope that people follow my lead.”

Longley is the founder of Rainbow Sandals, based in San Clemente, Calif.

As a teen, he recalled, he worked mowing lawns and disposed of the clippings at the local dump. “I saw all the things people threw away,” Longley noted.

The image stuck with him. So years later, when he saw a broken, discarded flip-flop on the beach, he was inspired.

“It’s not good for us as a society to have all this disposable stuff, and I realized I wanted to make something that doesn’t end up in the dump; that lasts.” His passion for surfing helped him focus his energy and talents on creating better footwear. In 1974 he launched Rainbow Sandals: so named after the colorful layered rubber soles. The durable, comfortable sandals became an icon of the surfing set, and today Rainbow Sandals is an international business, producing roughly two-million pairs a year.

The company’s success also spurred the launch of the Rainbow Sandals Foundation, which benefits more than 30 different charities. Rainbow Sandals’ “Repair, Reuse, Recycle” program reconditions gently used sandals, which are then donated to homeless, victims of natural disasters and others in need. And although Rainbow Sandals has strong ties to the Southern California community, contributions don’t stop there. In addition to monetary and in-kind donations, the Foundation liaises with other companies and organizations to help provide and transport food, clothing, and all sorts of vital supplies worldwide, “to improve and enhance the lives of people in need.”

Longley’s passion for giving is indiscriminate and far-reaching, and parallels the mission of the Red Cross.​ The Red Cross is grateful to partners like Rainbow Sandals who help provide food, shelter, relief supplies, emotional support, recovery planning and other assistance during more than 60,000 disasters each year.

As for Longley, he revealed he is grateful for the success of Rainbow Sandals and the generosity it fosters. “I believe it’s good to help, and I want to bring awareness to it. Giving is the secret of life,” he added. “It’s the most important thing.”