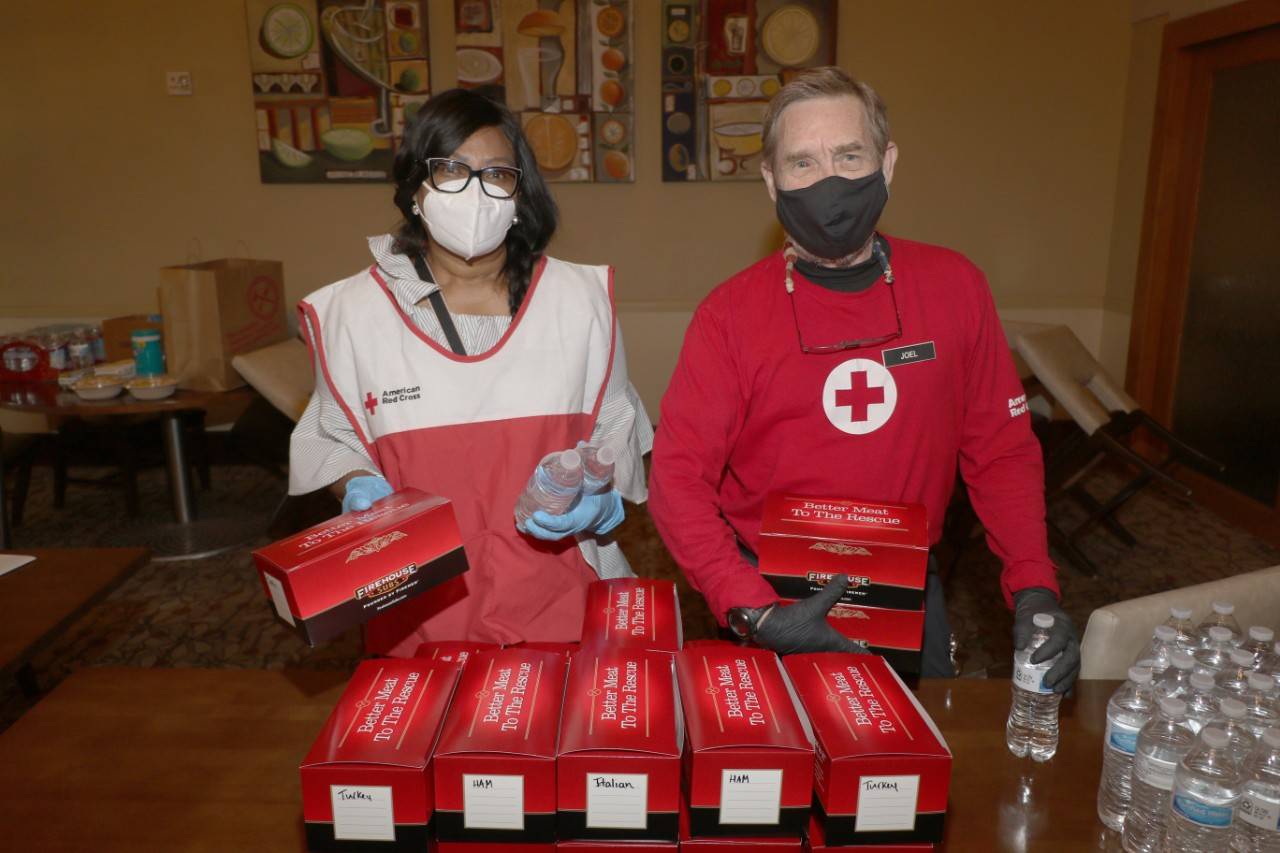 When a large apartment complex fire displaced 160 people from their homes, volunteers with the American Red Cross Southern California Region jumped into action to provide over 600 overnight hotel stays and more than 1,700 meals and snacks for those displaced, in addition to health services, emotional support, recovery services and more.

The Upland Fire response was supported by dozens of volunteers, each providing compassionate care to those displaced from their homes. Here are just a few of their stories…

The Chavez family was cooking dinner while in their cozy apartment one late afternoon.  Anthony Chavez started to smell smoke, like burning rubber. He thought that the food or something in the kitchen was burning or catching on fire, but everything in the kitchen looked fine. Then, Anthony opened the front door and looked outside. To his shock, he saw a raging inferno headed his way. He saw large amounts of smoke and fire that were bellowing out from the roof of his apartment building, as winds helped the spread the fire as it traveled through a common attic space on the second floor of the building, joining all the apartments together.

Anthony gathered his family and evacuated his second-floor apartment, knocking on his neighbors’ doors as he passed them on their way to safety. Anthony’s family found a safe location across the street by a neighboring elementary school as they watched their home of 14 years —and everything in it— burn. While at the school, Anthony learned that the American Red Cross had setup a Temporary Evacuation Point (TEP) at the school. Anthony located the TEP, where Red Cross Volunteers were able to register his family for assistance. While the Red Cross arranged for a hotel room for the family, they were provided with a safe environment, snacks, and refreshments.

The Red Cross Lodging Team found Anthony and his family a room at the local DoubleTree Hotel. Feeding Teams also provided the Chavez family, and many others, with three meals, refreshments, snacks and more every day during their recovery period.

Joel Fritz has been a Red Cross Volunteer for about a year. Already, Joel is a well-seasoned Feeding and Temporary Evacuation Point (TEP) worker, who has experienced several local deployments. Joel lives in the City of Ontario, which places him in the center of most Red Cross disaster responses in San Bernardino County. Joel has a flexible schedule that allows him to respond to most Red Cross emergency responses.

While at the Ontario DoubleTree Hotel, Joel was observed serving several clients that were displaced. His compassion and professionalism showed as he cared for each of the clients. Joel also took on the responsibility of training a new volunteer, among his other duties.

Karen Barrett has been with the American Red Cross for over three years. She has a role as a Fiscal Lead and recently took on the position of  Document Lead Reviewer. In her regular volunteer roles in the Red Cross, Karen reviews and audits the finances that are issued to clients by the Disaster Action Team (DAT) members and Case Workers. To accomplish her tasks, Karen leads a group of five volunteers. In her spare time, Karen has also volunteered at the Sound the Alarm events, installing fire alarms in homes.

Karen’s day job is with Monster Energy as an accountant, but has been in the banking industry for over 25 years and has achieved her master’s degree in accounting.

During the Red Cross response to the Upland apartment complex fire, Karen responded to an emergency call for feeding volunteers. Most of the clients were sheltered by the Red Cross in local hotels. Three meals, snacks and more were provided each day to all the clients. These meals had to be delivered and distributed to the various hotels in the city.

Working full time, Karen’s employer allowed her to take time off for this emergency response. Using her vacation time, Karen didn’t hesitate to give her best to the Red Cross and helping clients in their time of need.

Although Karen has been with the Red Cross for over three years, this was her first disaster deployment in the field. Learning very quickly, Karen was assigned to call all the residents staying at her designated hotel, then help with food distribution. Karen also helped record who had gotten their meals, and who needed specially-prepared dietary meals.

Leticia (Lety) Escobar has been a volunteer with the American Red Cross for three years. Lety holds several volunteer positions, including Community Partnership Team Member, Disaster Services Technology Team Member, Radio Communications, Latino Engagement Team Member, Mass Care, and Sheltering Service Associate. After the apartment complex fire in Upland, Lety was working at the Ontario La Quinta Hotel, where she helped deliver meals to people who had been displaced from their homes and were being assisted by the Red Cross.

In her spare time, Lety is a Bible student at the Rock Bible College, where she plans to earn her bachelor’s degree in Biblical Studies. Being very enthusiastic about her roles with the Red Cross, Lety is trying to involve more faith-based non-profit organizations to partner with the Red Cross in future endeavors. Lety also wants to see more communication with Spanish-speaking communities, making them aware of who the Red Cross is and how the Red Cross is here to help.

Marcus Perez is retired and has been an active Red Cross volunteer for over a year. As a volunteer, Marcus supports Red Cross Blood Services and has also been an active Feeding Team Member, helping provide meals at several Red Cross disaster responses. During the Red Cross response to the Upland apartment complex fire, Marcus picked up food at various restaurants and kept track of special dietary meals to ensure Red Cross clients received what they requested. Once the food was delivered to the hotels, Marcus would call each of the clients to alert them that their meals had arrived. Marcus also coordinated with other Red Cross volunteers to make sure that all clients were provided meals in a timely manner. Thanks to Marcus and fellow Red Cross volunteers, those displaced from their homes had three warm meals a day, snacks and more.

Little Mosteller and her six-year-old daughter Bella were among the many people forced from their home by the Upland apartment complex fire. Living on the first floor, the flames never touched the Mosteller’s apartment, however, their unit sustained major water and smoke damage and was declared uninhabitable.

When they were alerted to the fire, the Mostellers quickly evacuated to the elementary school located across the street from the apartments, leaving their pet turtles behind. Little, her three children, and her 76-year-old mother watched as the fire burned above their home of ten years.

Red Cross volunteers delivered meals, offered health services, recovery support and more for the Little family, as well as other displaced families, as they began their road to recovery after the devastating apartment fire. At one point, the fire department allowed Little to return to her apartment to retrieve medications and necessities. Happily, the family was reunited with their pet turtles, which were unharmed during the incident! 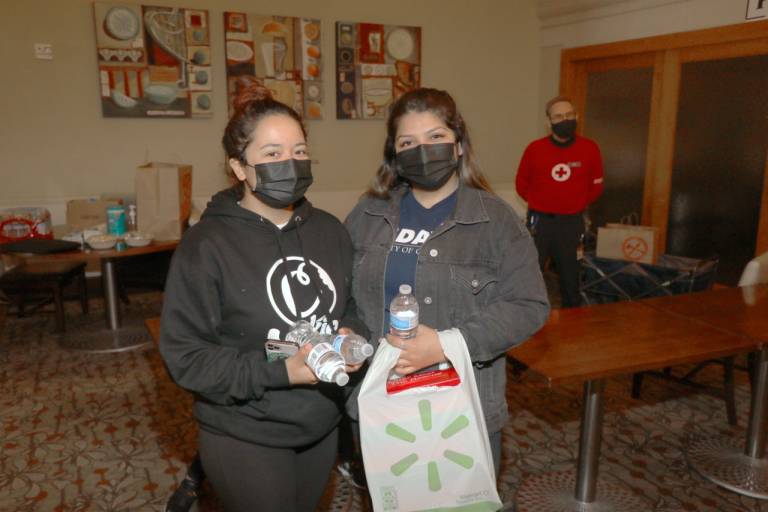 Nancy DelCid and her friend Vanessa Pulido pictured here picking up meals provided by the American Red Cross and partners. 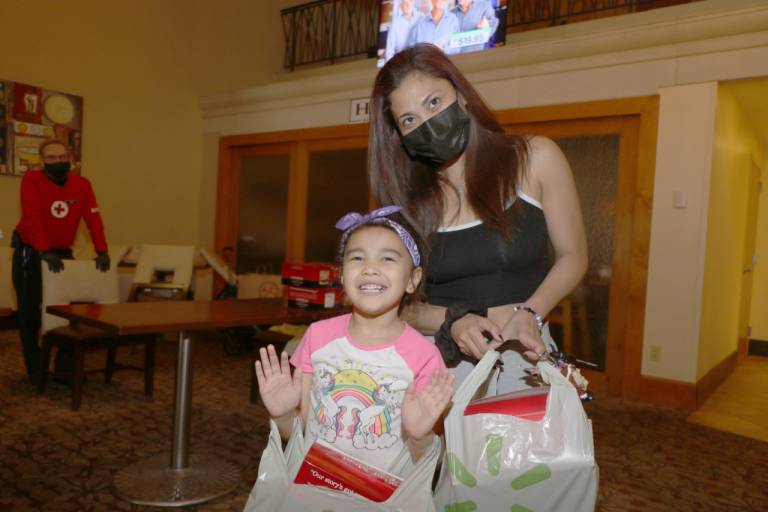 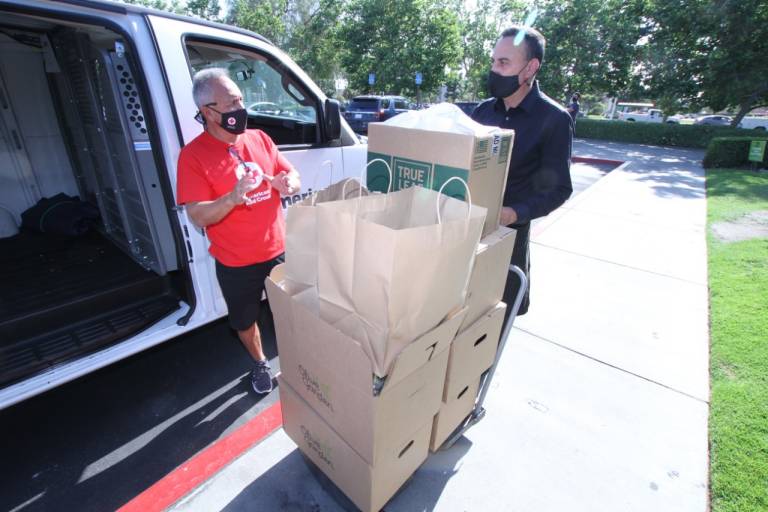 Red Cross volunteer Marcus Perez facilitates a delivery of meals for people displaced from their homes by the Upland apartment complex fire. 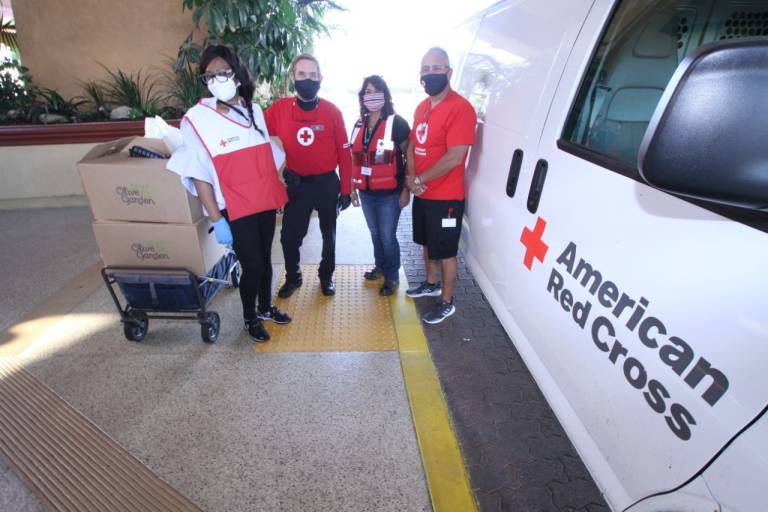 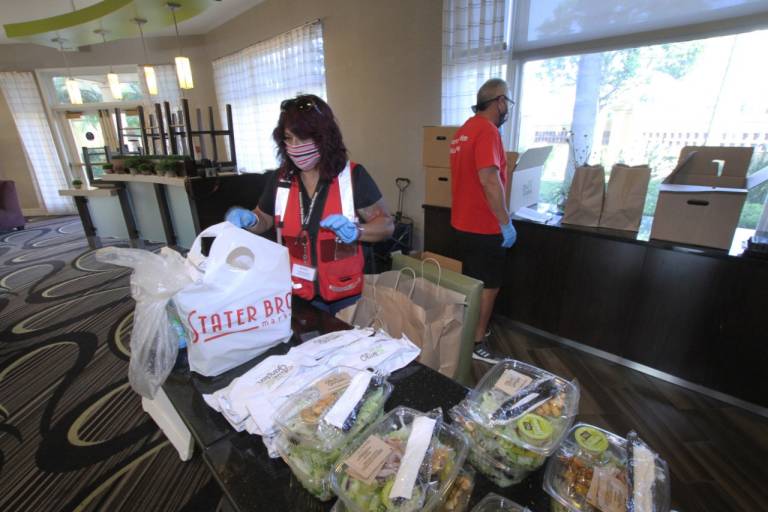 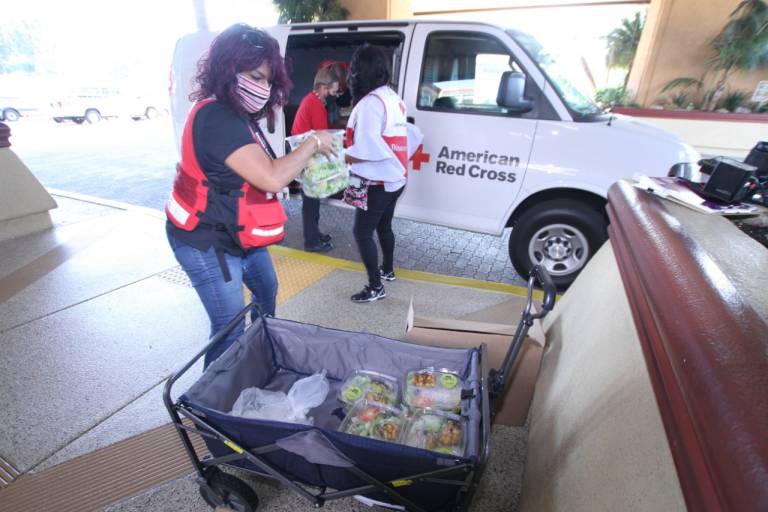 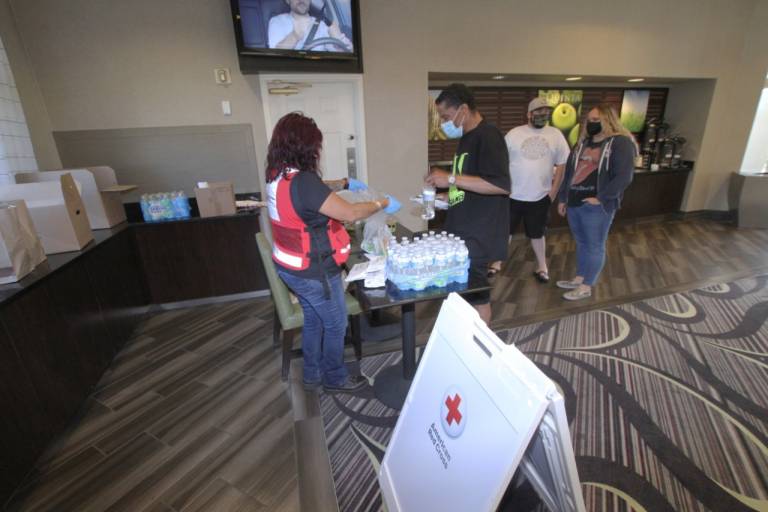 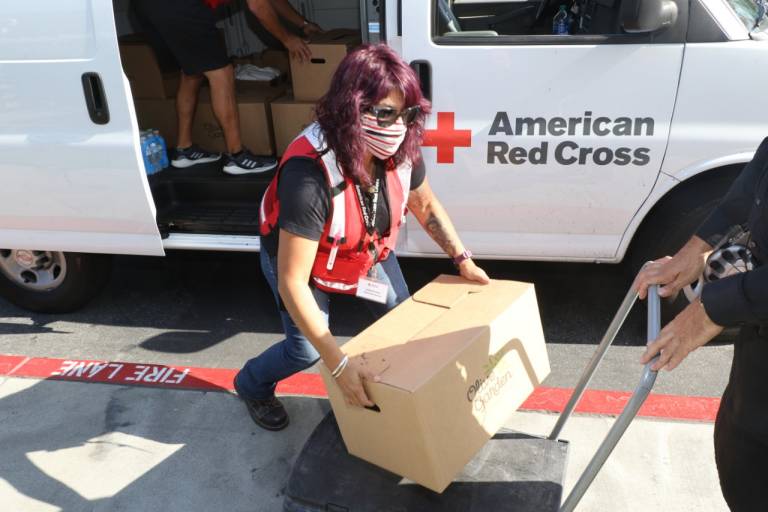 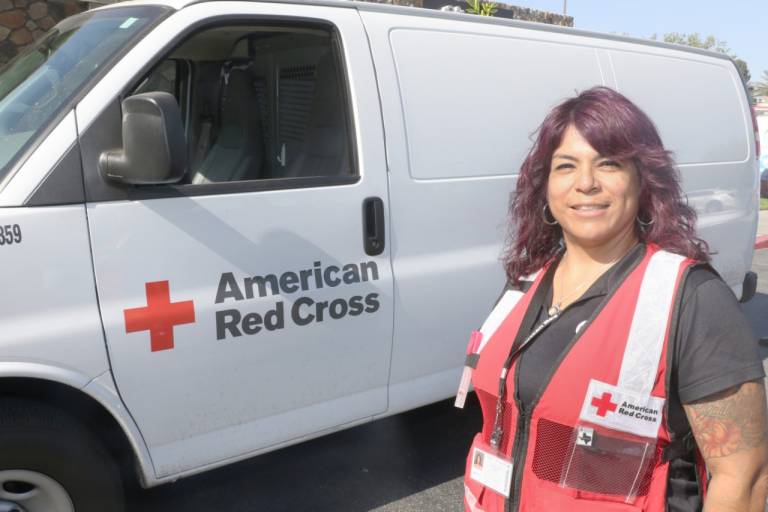 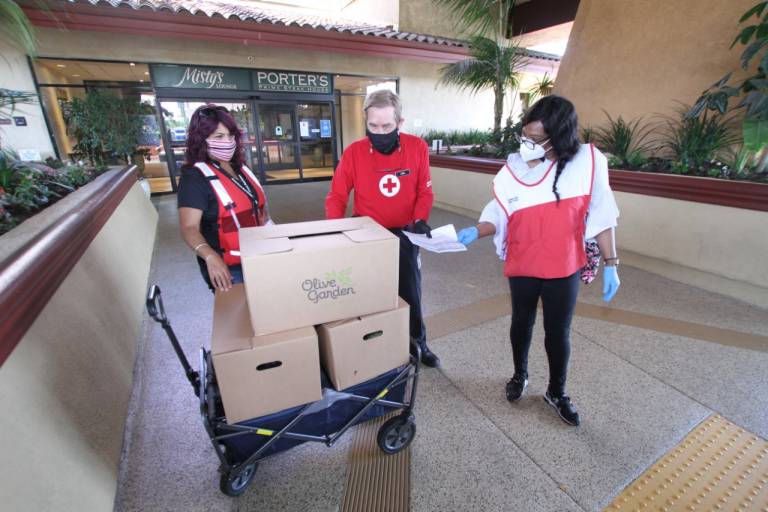 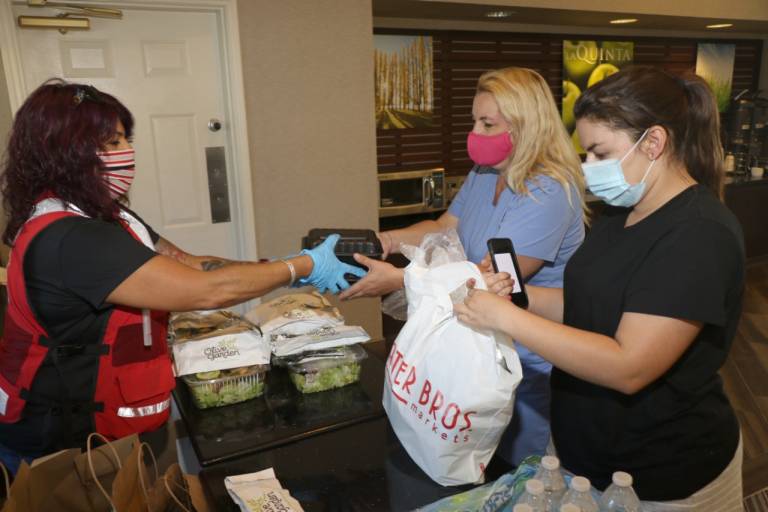 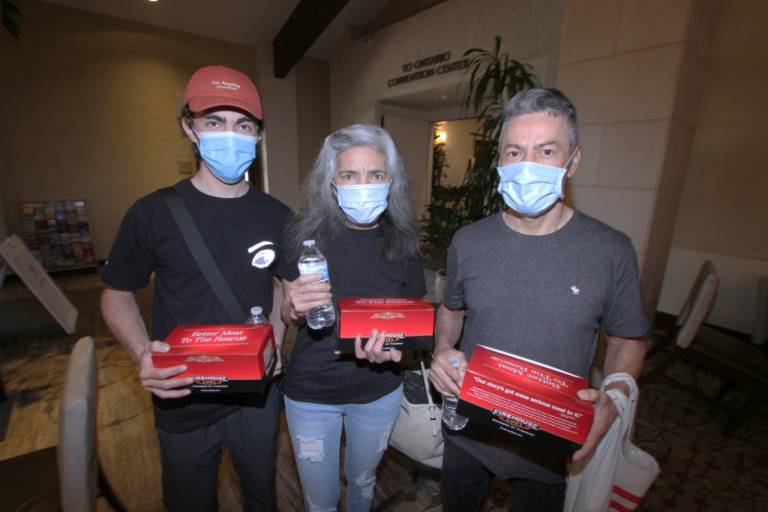 The Chavez Family were among the many people who received support from the Red Cross after the Upland apartment complex fire. Tragically, the family's home of 14 years was destroyed in the fire. The Chavez family, and all those displaced from their homes, were provided hotel lodging by the Red Cross, as well as three warm meals a day, health services, recovery support and more.