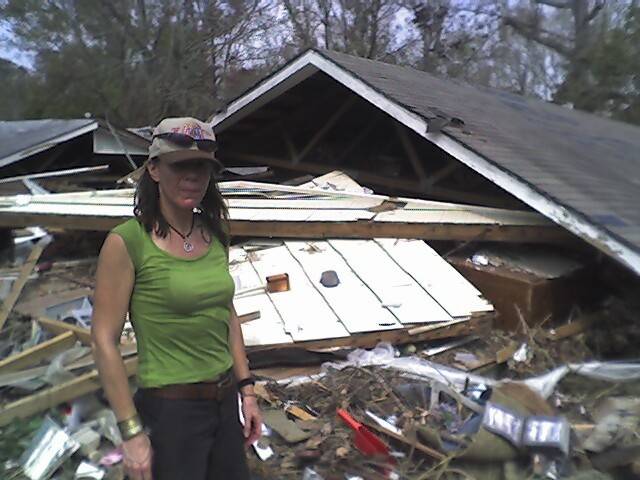 Jane Callen is pictured in Louisiana immediately following Hurricane Katrina in 2005, which was her first disaster deployment as a volunteer with the American Red Cross. On this day, her team was distributing water, canned and baby food, first aid supplies, tarps and other essential supplies to local survivors.

"So much of this work is just showing up and listening with the ear of the heart."

For 18 years, Jane Callen — an EMS lieutenant and the 2017 Montgomery County, Maryland Volunteer of the Year — has been making a positive difference as a volunteer Red Cross disaster worker.

“Volunteering is giving yourself, your time, your energy, your heart — with no remuneration,” said Jane, a Fire and Emergency Services Commissioner for Montgomery County. “It feels so clean and clear: there is a profound and immediate need, so you set aside everything else in your life, take leave from your job, find someone to watch your pets and give yourself fully to service.”

Jane often finds “magical moments” in her Red Cross service, including a time when she was able to provide ice cream for an elderly woman staying in a hurricane shelter.

“I remember a lovely woman who was staying in the shelter we set up in St. Thomas,” said Jane, referring to the aftermath of Hurricane Irma in 2017. “She had been in hospice before Irma hit, and her pain medications were lost along with everything else in the hurricane. She was blind and unable to walk, but she could communicate. It was hot as blazes, and she wanted something to cool her off.”

Volunteer service is a defining role in Jane’s life that started with the Red Cross following Hurricane Katrina in 2005.

“I saw the photos of flooding in New Orleans and couldn’t not act,” said Jane, noting the double negative as intentional due to inaction seeming unimaginable. “I felt a similar calling when the earthquake hit Nepal in April 2015; I had to go. Our team was hit by the second earthquake in the Himalayas, and the path we had trekked up to reach a previously unreachable village was now buried under boulders. We set up a mobile [hospital] unit and did the best we could to deliver trauma care. I promised that if I made it out of there, I would no longer put off my bucket list.”

One month after the Nepal earthquake, Jane returned to graduate school for a second master’s degree and is now a licensed clinical social worker.

She said that grace dwells in unexpected places: a mountaintop in the Himalayas; the bonds between strangers; the extraordinary acts of service that one witnesses as a volunteer.

In August 2022, Jane was deployed as a Red Cross disaster worker to Florida following Hurricane Ian. There, along with fellow volunteers, she worked to provide safe shelter for families who had lost everything, reunite flood-stranded community members with their loved ones, and even find the perfect pair of shoes to help a Red Cross shelter resident start his new job.

But despite the physical actions she and her teammates took, Jane knows that listening is quite possibly the most impactful characteristic of a Red Cross volunteer.

“So much of this work is just showing up and listening with the ear of the heart,” said Jane. “That may be one of the most important things that we do!”

To learn more about volunteering with the Red Cross and training to deploy to assist after local and large-scale emergencies and disasters, visit RedCross.org/volunteer.