“Jaime, please do not abandon me.”

Those were the words that Jaime Cruz heard on a call late one Saturday night in September from a desperate mother. Janet Leon Molina was searching for her son, Ronald, who had been missing since July.

Janet got connected with Jaime through the American Red Cross’ Restoring Family Links (RFL), a program of International Services that helps to reconnect loved ones who have been separated internationally by war, disaster and other humanitarian crises. Jaime had been working tirelessly – contacting government agencies, consulates, law enforcement and researching every possible database – to help Janet find her son.

On this particular night, Janet called him crying and frantic at 1 a.m. – someone had contacted her claiming they had Ronald in custody and sent her pictures of people kidnapped, blindfolded and mutilated. Through a Google search, Jaime was able to ascertain the pictures were not of Ronald; these were criminals trying to extort her. He calmed her down and promised to continue searching.

“Jaime, please do not abandon me,” begged Janet. “The Red Cross is the only organization that has not turned their back on me.”

Ronald Aldair Lambert Leon was a 25-year-old living in Maracaibo, Venezuela. In July, he flew to Mexico to stay with a friend in Acapulco and would then continue to the border town of Reynosa and attempt to cross into McAllen, Tex. He failed on his first attempt, but on July 23, Ronald called his mother and told her he was ready to try again. It was the last time she would hear his voice.

Janet came to the U.S. from Venezuela three years ago seeking asylum and is now living in Boca Raton, Fla. When she didn’t hear back from Ronald, she contacted every Venezuelan and American agency she could think of who might be able to help. Friends and family helped her contact human rights organizations close to the border, who are overwhelmed with the volume of these cases they see every day. She didn’t know what else to do.

It was then that Janet’s sister-in-law, who still lives in Maracaibo, told her about a neighbor who heard that the Red Cross had assisted in finding a Venezuelan in Mexico that had been kidnapped. Perhaps they could help her too. So, they contacted the Venezuelan Red Cross who passed along the contact information of the American Red Cross headquarters in Washington, D.C. The case was then forwarded to Jaime Cruz, the Service to the Armed Forces and International Services specialist in South Florida. On Sept. 13, 45 days after she had last heard from her son, Janet got a call from Jaime.

The Search for Ronald

Once Jaime determined that the case was eligible to proceed for tracing – a family link had been broken due to international crisis and that the person had been missing for 72 hours (which is the legal threshold to establish a “missing person” case) – the hard work began.

Jaime conducted searches on databases of the U.S. Citizenship & Immigration Services, U.S. Border Patrol, Texas Department of Justice and a few other agencies that have public information regarding people detained at the border. He contacted a few non-profit agencies dedicated to assisting migrants or locating the bodies of those deceased.

A tracing message was sent to the Mexican Red Cross to initiate the search at the town of Reynosa, Ronald’s last known whereabouts, in case he was in jail, a shelter, the hospital or morgue.

Jaime had to contact the Venezuelan Consulates in Mexico City and Washington, D.C. Unfortunately, neither was able to provide much help.

It was during this time that Jaime got that phone call from Janet after she placed a missing person ad.

It was a 24/7 job, but Jaime was determined and emotionally invested. The search continued through most of September until finally, Jaime got a lead on Sept. 23. Ronald’s friend, who lives in Georgia, contacted Janet about a free and public database called the National Missing and Unidentified Persons System (NAMUS), which collects and publishes information, details and pictures from agencies and local authorities across all U.S. states.

With this resource, Jaime discovered that the Hidalgo County Sheriff’s Office in Texas had a body in their morgue – an unidentified person – that might be a match to Ronald. Jaime got a hold of Lucio Torres, the lead investigator on the case, and Dr. Norma Farley, the forensic doctor, and they started sharing information.

Dr. Farley mentioned a scar from an appendix surgery and a scar between the chin and the lower lip, which coincided with details Janet had provided. Ronald’s brothers, who live in Santiago, Chile, were also able to access the NAMUS case file and recognized the clothing found on the body. Finally, Dr. Farley was only able to obtain fingerprints from the left hand of the body. If they could find a match this way, they would know for sure if it was Ronald.

However, in Venezuela they only take the fingerprint of the right thumb for identification purposes and other government documents. But through another stroke of providence, Ronald also happened to be a Colombian citizen through his father. To get his Colombian ID when he turned 18, they had taken fingerprints from both his hands.

Working with the Colombian Consulate in Houston, Torres and Dr. Farley obtained enhanced fingerprint files. On Oct. 4, they informed Jaime of a positive match, confirming the body was Ronald’s. He had been found dead on a riverbank of the Rio Grande on July 25 by the U.S. Border Patrol.

Immediately, Jaime called Janet to tell her the news. Her son was no longer missing.

Janet specifically requested Jaime as the American Red Cross delegate to accompany her to Edinburg, Tex., to collect her son’s remains. On Oct. 7, Jaime flew to Houston to meet up with Andres and Jonathan Leon, Ronald’s brothers, and Marco Bracamontes, a Red Cross public affairs team member based in Houston who was also aiding Jaime to handle the logistics. They all headed to McAllen, Tex., where Janet was waiting.

The following morning, Jaime accompanied the family to the funeral home to arrange crematory services; they went to Sheriff’s office to get the police and autopsy reports. Since none of the family speaks English (another reason why Jaime was indispensable to them), Jaime carefully translated the reports out loud – with many painful details, but which also provided closure. As they waited during the cremation process, they started socializing and sharing family stories with Jaime. “They started talking about lighthearted things, and they were laughing,” says Jaime. “We brought smiles to their faces, even in a hard moment.”

When the ashes were ready, Jaime wanted to personally hand them over to Janet. With his mission accomplished, he wanted to see it through to the very end. It was a very emotional moment. “They broke into tears. Everyone was weeping, but I think that was a closure moment for every single person involved.”

Jaime knew that despite the devastating conclusion of the search, the family could now mourn Ronald. They were not in anguish anymore, but at peace.

“The Power of the Red Cross”

Jaime himself is a U.S. Navy veteran with ten years of service which included some humanitarian missions. Since he started with the Red Cross in January 2019, this was the most complicated case he has dealt with. It looked almost impossible with all the international complications, but Jaime refused to give up. He never left Janet’s side and he completed the search – overcoming bureaucracies, criminal threats to the family and false leads. And he saw his perseverance and dedication pay off in the end.

“I preferred to be up late helping her than not doing everything I could. It felt like I was a tool to help ease her pain. I felt like an angel being able to help her.” Or, as Janet called him, “el ángel de la Cruz Roja.”

As Jaime looks back on his experience, he is amazed at how cooperative and even grateful the local and federal authorities were. But he also recognizes that as a representative of the Red Cross, people were willing to open doors for him and build bridges.

The family told him there was no way this would have been possible without the assistance of the Red Cross; that it would’ve taken them forever to figure out what they even needed to do.

Jaime knows this, which is why he proudly puts on his Red Cross vest every day to head to work. “That’s the power of the Red Cross.”

If you or someone you know needs help reconnecting with loved ones who have been separated internationally, please call 1-844-782-9441.

"That's the power of the Red Cross." 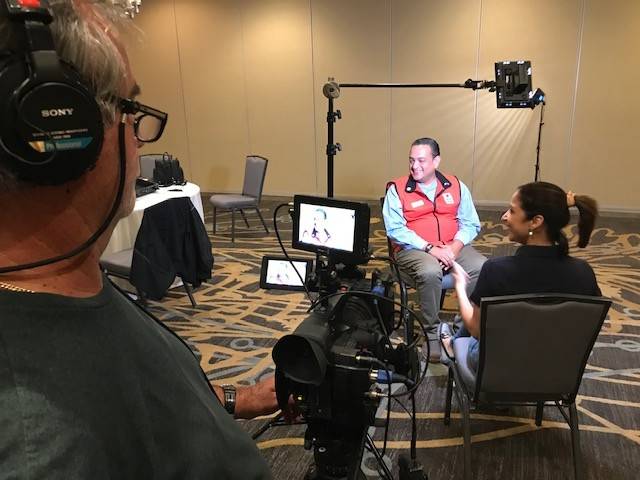 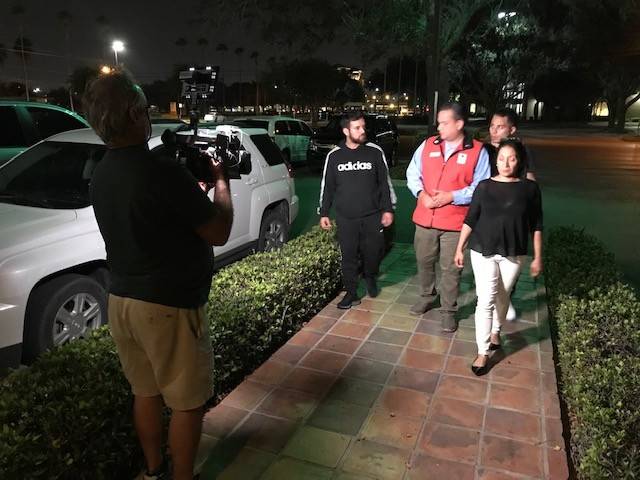 Univision filmed a documentary on Ronald's story while his family and Jaime were in Texas. 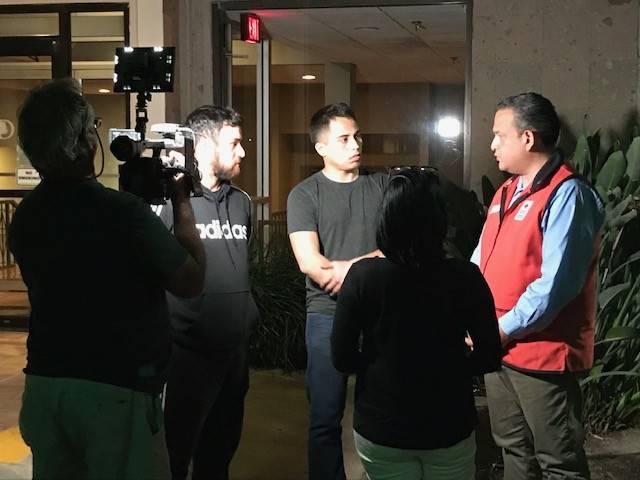 Jaime chats with Ronald's family as they await his ashes. 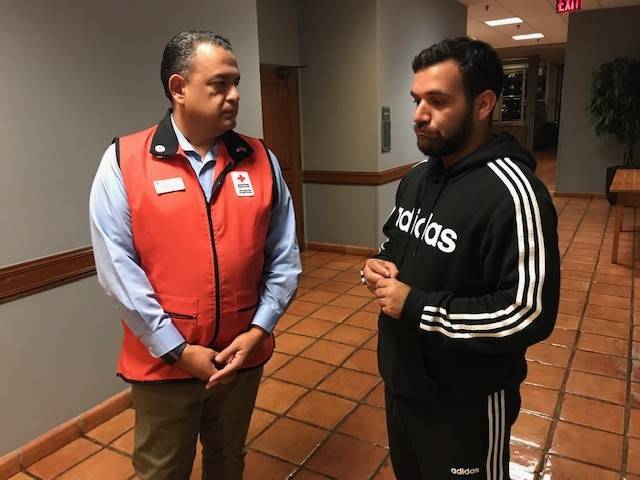 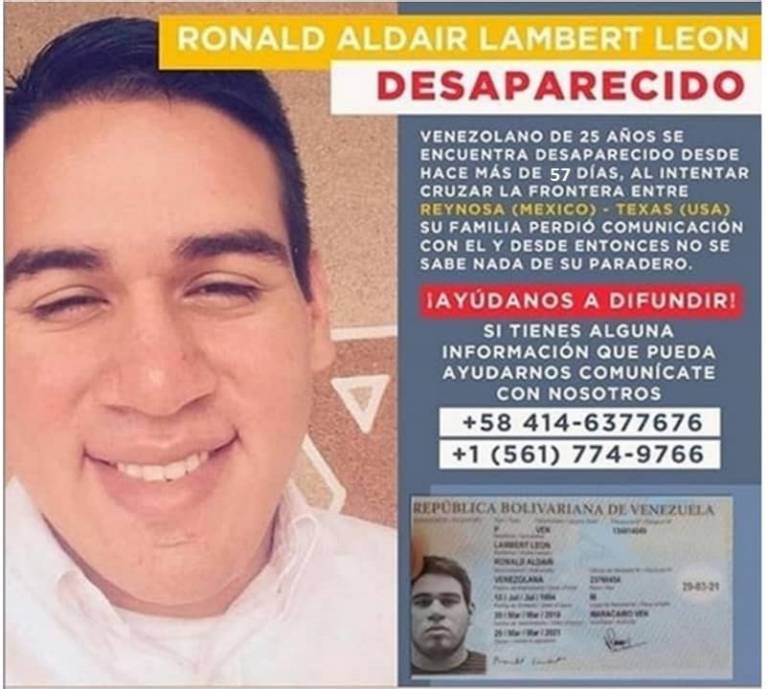 The missing person ad that Janet distributed for help in finding her son. 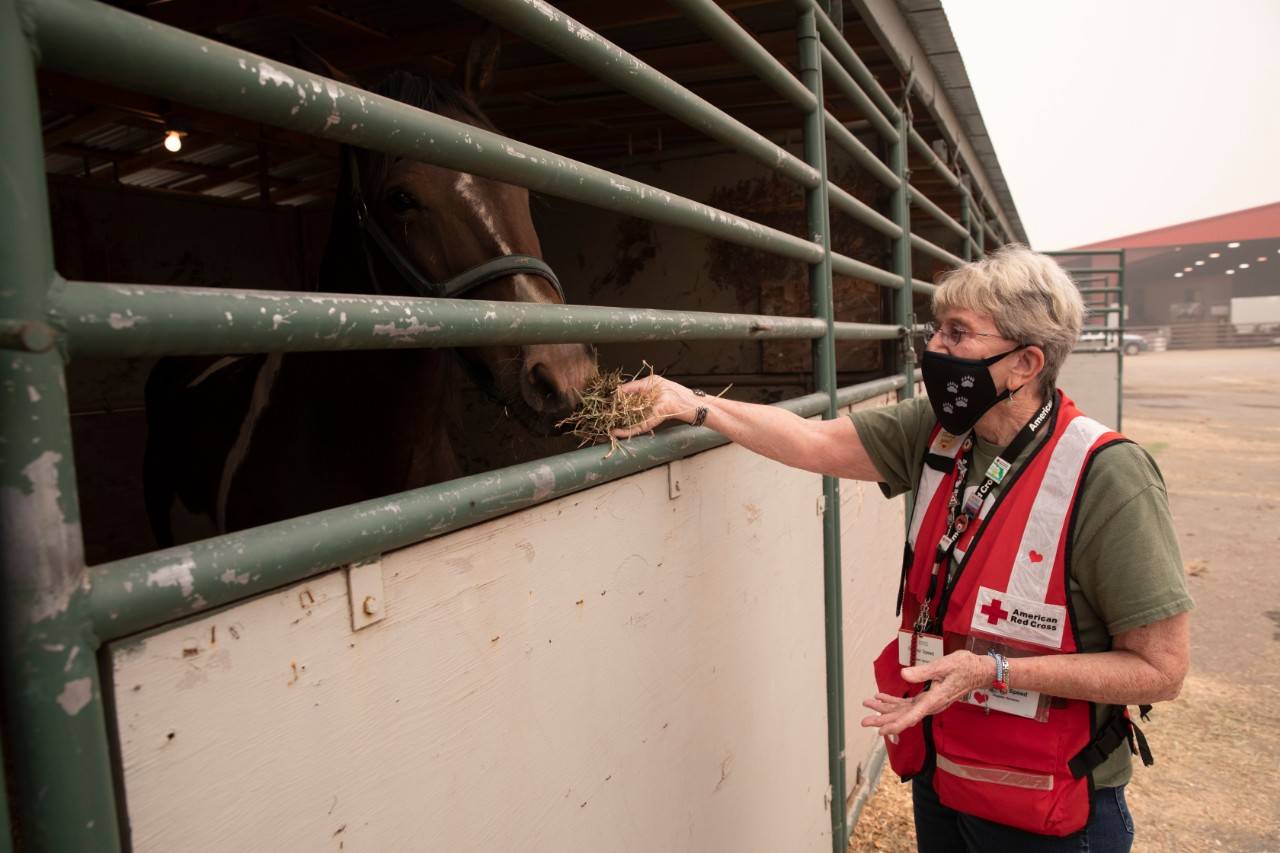 Red Cross Volunteer Gaenor Speed, A Living Example of the Power of Volunteering and Giving Back 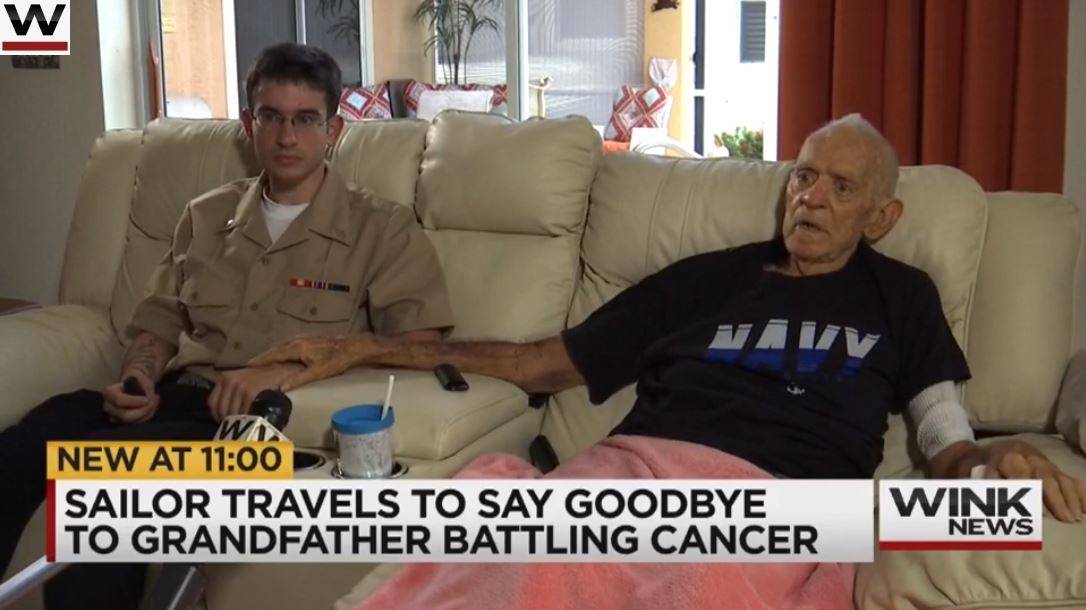