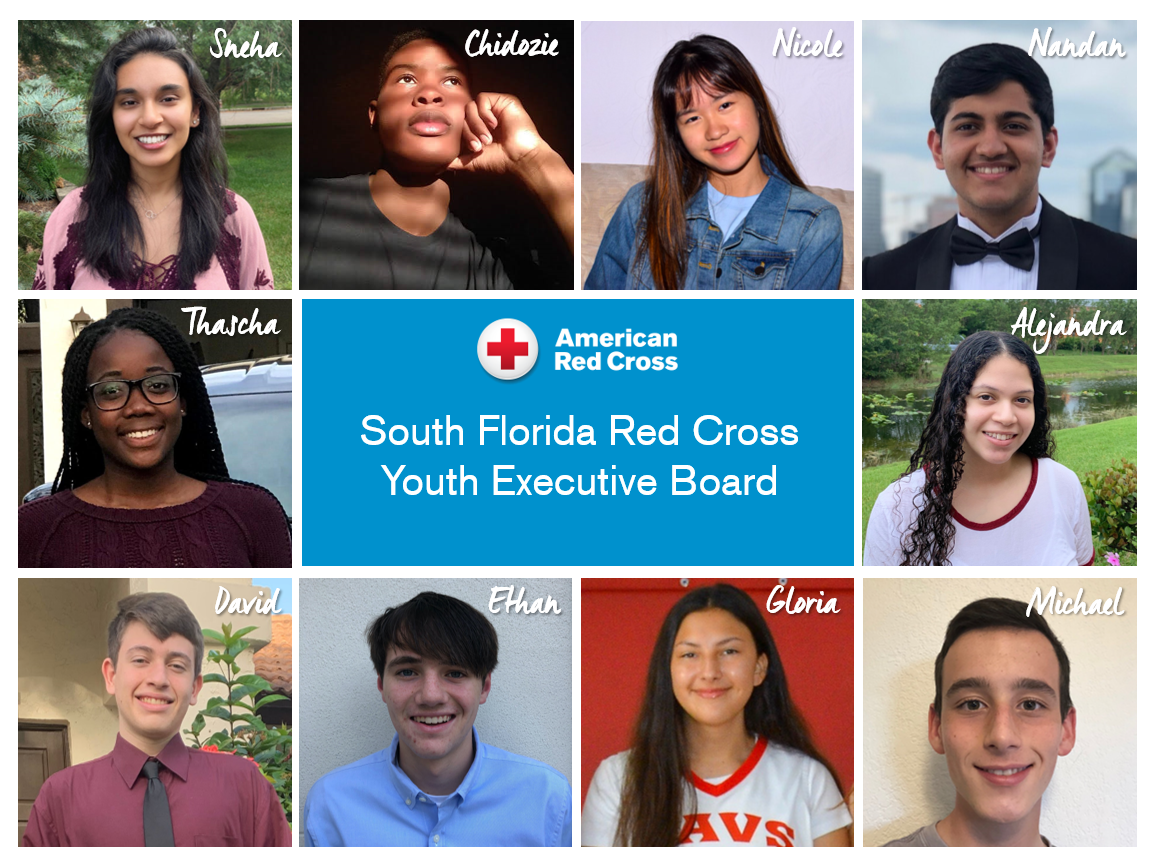 In trying times such as the COVID-19 pandemic, active hurricane seasons, and unexpected disasters, humanity is what we will always rely on most throughout generations.

Volunteers represent more than 90 percent of the Red Cross workforce with about 25 percent being youth and young adult volunteers aged 24 and younger. These young volunteers are able to learn valuable lessons, create a positive impact on their communities while refining their leadership skills, and discovering new passions.

In the South Florida Region, there are 450 youth and young adult volunteers. They participate in activities like Missing Maps – a program where 15-20 youth and young adults gather once a week to map out regions in the world that do not have access to reliable maps. Many of these volunteers are so inspired by Red Cross activities such as Missing Maps, they continue their service and create Red Cross clubs at their schools. In these clubs, they can share their volunteer experiences and collaborate on new ideas to help their communities. In the region, there are currently twelve high schools and colleges with active Red Cross clubs.

To further the involvement of youth and young adult volunteers, a new initiative was implemented. In August, the first Youth Executive Board was created, welcoming young, diverse leaders throughout the South Florida Region to the Red Cross. The Youth Executive Board consists of two Co-Presidents, a Vice President, two Red Cross Club Liaisons, two Disaster Preparedness Officers, two Service to the Armed Forces Officers, and a Fundraising Officer. Each board member had to apply, submit a resume, and interview for their positions, with the hope of leading and creating innovative ways to help others.

After many applicants, Sneha and Nandan became Co-Presidents of the Youth Executive Board. Sneha is a senior in college, majoring in biology, minoring in business, and transdisciplinary. During Sneha’s first year as a Red Cross volunteer, she was part of many initiatives such as Sound the Alarm. This campaign helps reduce home fire deaths and injuries through a series of home fire safety and smoke alarm installation events that take place throughout the year and is a critical part of the Home Fire Campaign that was launched in 2014. As Co-President, she would like to expand current programs and create new ones for more youth and young adult volunteers, while continuing to be a mentor to young Red Cross volunteers. Sneha aspires to become a physician with Doctors Without Borders in an effort to help those all over the world. Sneha feels very passionate about implementing health care for all and ending world hunger. She quotes, “There are so many countries that have the resources to end world hunger but still have not, and that’s something that I would definitely want to change if given the possibility.”

Nandan is in his second year of college, double majoring in biology and behavioral neuroscience. Since becoming a volunteer in middle school, the Red Cross has taught him how to help others without expecting anything in return. At his university, he co-founded a Red Cross club where he’s learned how to support his peers as Chair of Philanthropy and Social Outreach. As Co-President, Nandan hopes to implement ideas for the International Humanitarian Law program, Service to the Armed Forces, and International Services for youth and young adult volunteers. A quote from Gandhi that resonates with him is “The best way to find yourself is to lose yourself in the service of others.”

Chidozie, the Vice President, is a junior in high school where he’s involved in a club that helps kids in need by hosting food drives and other initiatives. He became a Red Cross volunteer earlier this year and has been highly involved from the start. Because of his involvement as a volunteer, he began coming up with ideas of how to help people virtually which ultimately led to his decision to apply as Vice President of the Youth Executive Board. His biggest dream is to practice medicine and help his country of Nigeria. “Youth volunteers are very important because we have a lot of energy to do something good,” says Chidozie.

With endless and innovative ideas, commitment, and passion, the leaders of the first Red Cross Youth Executive Board provide hope and inspiration for a better tomorrow.

For more information on how to become a youth or young adult volunteer visit redcross.org/SFLVolunteer.