Idaho volunteer deployed to California expecting to help people; he got to comfort their pets, too 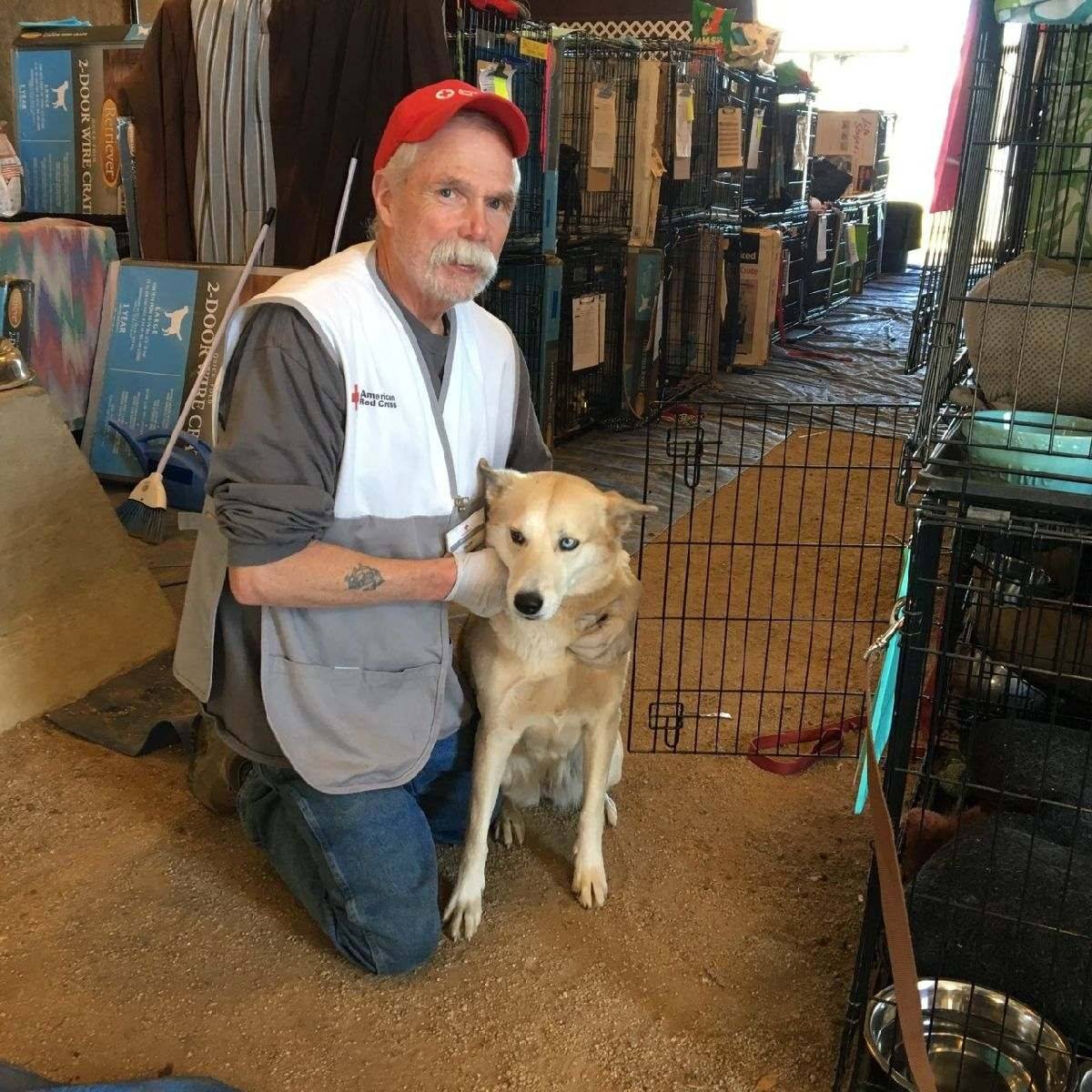 Twin Falls volunteer Tim Dye with Zina, his favorite of the dogs he cared for following the wildfires in California.

When Red Cross volunteer Tim Dye left Twin Falls for California in November to help those in the path of devastating wildfires, he had no idea he would be spending as much time with pets as people.

“We were sitting at our nightly meeting the first night, and the man said we were going to start an animal shelter and we need a guy. I walked up to him and said ‘I’m your guy,’” Dye said. “’I’ve been around dogs for 72 years. I’ve milked cows. I’ve treated cows. I’ve raised baby calves. I’m your guy.’ And he said, ‘Do you know what? I think you are.’ So he put me in the shelter that night.”

For the next few weeks, Dye and his team would care for the pets of families staying at emergency shelters or in tents or trailers in the parking lot, as was often the case. He spent 14 days in Orland and six in Chico. By the end, they were tending to 80 dogs, 11 cats and two birds.

Often starting his day at 5 in the morning, Dye would first walk the bigger dogs and then get the other volunteers started on cleaning cages and feeding and watering their four-legged guests. Like their owners, many of the animals were having a difficult time.

“The dogs were stressed,” he said. “Most had never been in a cage before. It was really hard on the animals, just like it was hard on the people.”

Dye said setting up an animal shelter like this was new to the Red Cross and provided an invaluable service to those families who had lost everything. Being able to remain with their pets restored a sense of normalcy to their lives, and the shelter gave them the peace of mind that their animals would be well cared for when they ran errands, returned to work and began the initial steps of the long recovery process.

And by caring for the animals, Dye found he was also forming a bond with their owners.

“There was this one guy who had lost his wife four years ago, and then a year ago he had a heart attack, and then three months ago they found out he had a brain tumor, and I could see the sadness in his eyes,” Dye said. “I sent the mental health people over to his trailer to talk him. I said, ‘This guy, you can see, is so sad.

“And then when he finally brought his dogs in a couple days later, he said, ‘Tim I need to thank you so much for coming over and helping me. You perked up my attitude.’ From then on, we were buddies. Every morning he would come in to walk his dogs and he would give me a big hug.”

An especially poignant moment for Dye came on Thanksgiving Day when a family from Redding — some 100 miles away — brought 20 turkey dinners specifically for the volunteers working in the animal shelter. They had lost three family members – a grandmother and two great-grandkids – in the Carr fire just a few months earlier. It was a heartbreaking incident that drew national media attention. The grandfather talked to his wife and his two grandkids on the phone as the fire converged on their home, unable to reach them.

“That was probably the most emotional moment for me,” he said.

Dye said he became especially attached to a little white dog named Zina. Zina never barked during the 20 days he cared for her, but the day he was getting ready to fly back to Idaho, she pulled the leash out of her owners’ hands, ran over to Dye, jumped on him and began to whine.

Dye slept in the same area with the dogs. One pup named Gus Gus would howl all night, so Dye decided to try something. He tucked the dog’s leash under his cot so he couldn’t get away and let the dog sleep on his legs.

“He never cried after that,” Dye said.

Dye’s love of animals began early in life. He grew up on 80 acres near Hamilton, Mont., where his father owned a blacksmith shop. The family had 20 hound dogs they used to track coyotes, mountain lions and bobcats for their hides.

When he was 4, Dye’s dad took him out to the pen one morning and told him he was now in charge of the dogs.

Dye is retired now but has done a little of most everything during his 71 years. He was a crew chief on a B-52 bomber in the Air Force, worked in a papermill for 10 years, owned a restaurant for 20 years, managed a dairy and ran a convenience store.

He’s been on several other deployments during his time with the Red Cross including two following Hurricane Sandy, and also helped with operations in Colorado, Kentucky, Pocatello and Missoula.

“I ate, slept, did everything with those dogs for 20 days, and I miss them,” he said. “I miss them bad, and their owners. Their owners were so sweet. I tried to take the best care of them I could — the owners and the pets — and they knew it.  Cause you know they got nothing left, nothing.”