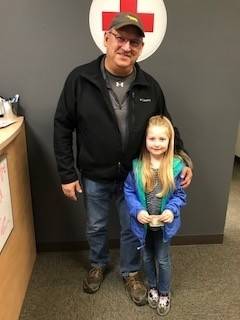 At the end of most days, Jim Reininger puts his loose change in a pot. Every so often his 7-year-old granddaughter Ruby Zimmer comes over and goes through those coins with him, separating them into nickels, dimes and quarters. And then they divide that money into three piles – a pile for Ruby’s piggybank and ones for Reininger’s other two granddaughters.

Reininger is a former volunteer firefighter of 19 years and one day he and Ruby began chatting about the wildfires burning in California.

“I asked her if she would like to donate that money to the kids who had lost their homes and their schools and everything that they know -- that makes them safe and happy -- and she said ‘Yeah, I would like to do that.’ So that’s what we did,” Reininger said.

Just before Thanksgiving, Reininger and Ruby brought $17.35 to the Idaho Red Cross office to help families devastated by those fires.

As a thank you, Regional Philanthropy Officer Amber Kendall gave Ruby an American Red Cross hero bracelet and told Ruby she was a hero for helping others during a time of need.

“She was pretty excited,” said Reininger, who lives in Nampa.

“We had a family Thanksgiving and she was pretty proud to show that bracelet off,” he said.

Reininger couldn’t be prouder of his granddaughter’s compassion and generosity.

“Ruby is a very kind soul,” he said. “I find her to be one of the kindest and most humble people I have ever known. She just gets it.”

If you would like to follow in Ruby’s footsteps and help families impacted by disaster, make a donation today by calling 800-RED-CROSS or visiting www.redcross.org.