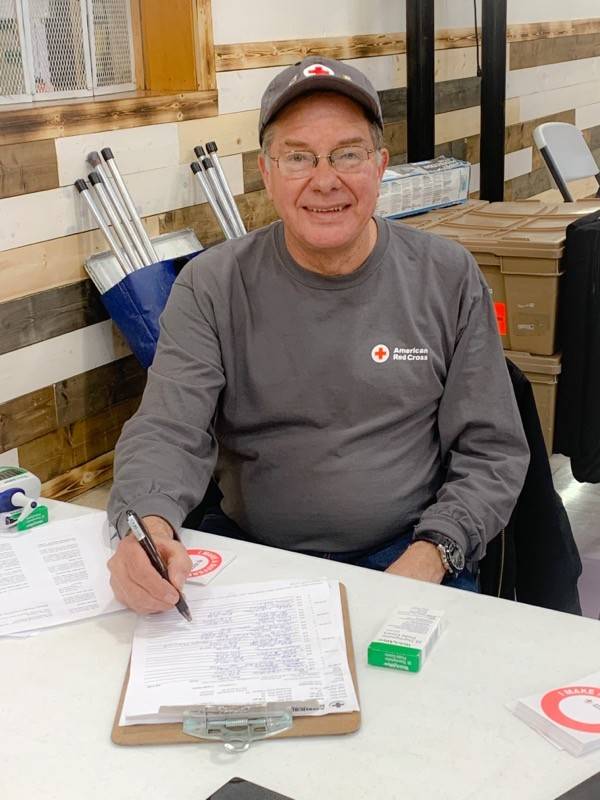 Volunteer Landis Meeks organizes six blood drives a year in Cut Bank and helps respond to disasters in an area that spans 200 miles. He’s been with the Red Cross for 30 years.

When a January fire swept across the prairie in Glacier County, along the eastern edge of the Rocky Mountains in northcentral Montana, two colonies of evacuated Hutterites wandered a Cut Bank grocery store with no place to go.

The store manager knew to call Landis Meeks, the face of Red Cross to people across a wide swath of the region. Landis set up a shelter for three busloads of Hutterites, members of a communal Anabaptist sect, in the town civic center. A local pizza place dropped off 20 pizzas.

The American Red Cross is honoring Landis for 30 years of service, which includes responding to local disasters and organizing community blood drives.

Landis said perseverance usually is enough to see a project to success.

“Usually things will work out,” he said. “Sometimes they don’t work out the first time, but you just keep plugging.”

When a disaster call comes in, Meeks might be headed to a fire in Box Elder or wind damage in Babb, a 200-mile range.

Landis became involved with the Red Cross through his involvement with the Knights of Columbus.

“One of our pillars is civic activities. I called to see what I could do to help the Red Cross. I helped the organizer, and she said at the end of it, I’m retiring, effective immediately. I’ve been doing it ever since,” he said.

That was 1990. Five years later, someone called and said an individual needed a hand after a house fire.

“I found out what they needed, and I visited with someone at Red Cross,” he said.

Just like that, Landis was on the Disaster Action Response team.

Landis is the Red Cross to the people of his community in northcentral Montana, said Ted Koenig, regional disaster officer for Idaho and Montana.

“Wearing that badge and that vest, being in the community and having those conversations, Landis has built the Red Cross’s reputation and extended the work we do,” Ted said. “We appreciate his willingness to say yes and support folks even when they’re far from home.”

Landis is the volunteer nearest the Blackfeet Reservation and has responded to fires and other moments of crisis.

“He’s a great ambassador for the mission,” Ted said. “He’s warmly received. He travels with this aura of someone who stands out for his commitment to service in his community.”

Landis’s deep roots in the community and the respect his neighbors have for him are key to his success, added Wendy McGrew, regional volunteer services officer for Idaho and Montana. “He’s been a stable part of that community for so long.”

Landis has been a blood donor as well as blood drive organizer. He’s given 22 gallons of blood, though pancreatic cancer forestalled recent donations. He’s a big advocate for the Red Cross blood donor app.

“We have a lot of people who want to come in at lunch. They can be in and out in a heartbeat,” he said.

Landis calls previous donors to encourage them to come out for drives, which makes a big difference in turnout.

Those who help him with blood drives keep him inspired. The newspaper calls sometimes to remind him to get information in for the next drive. Hutterite colonies come out in force to donate blood.