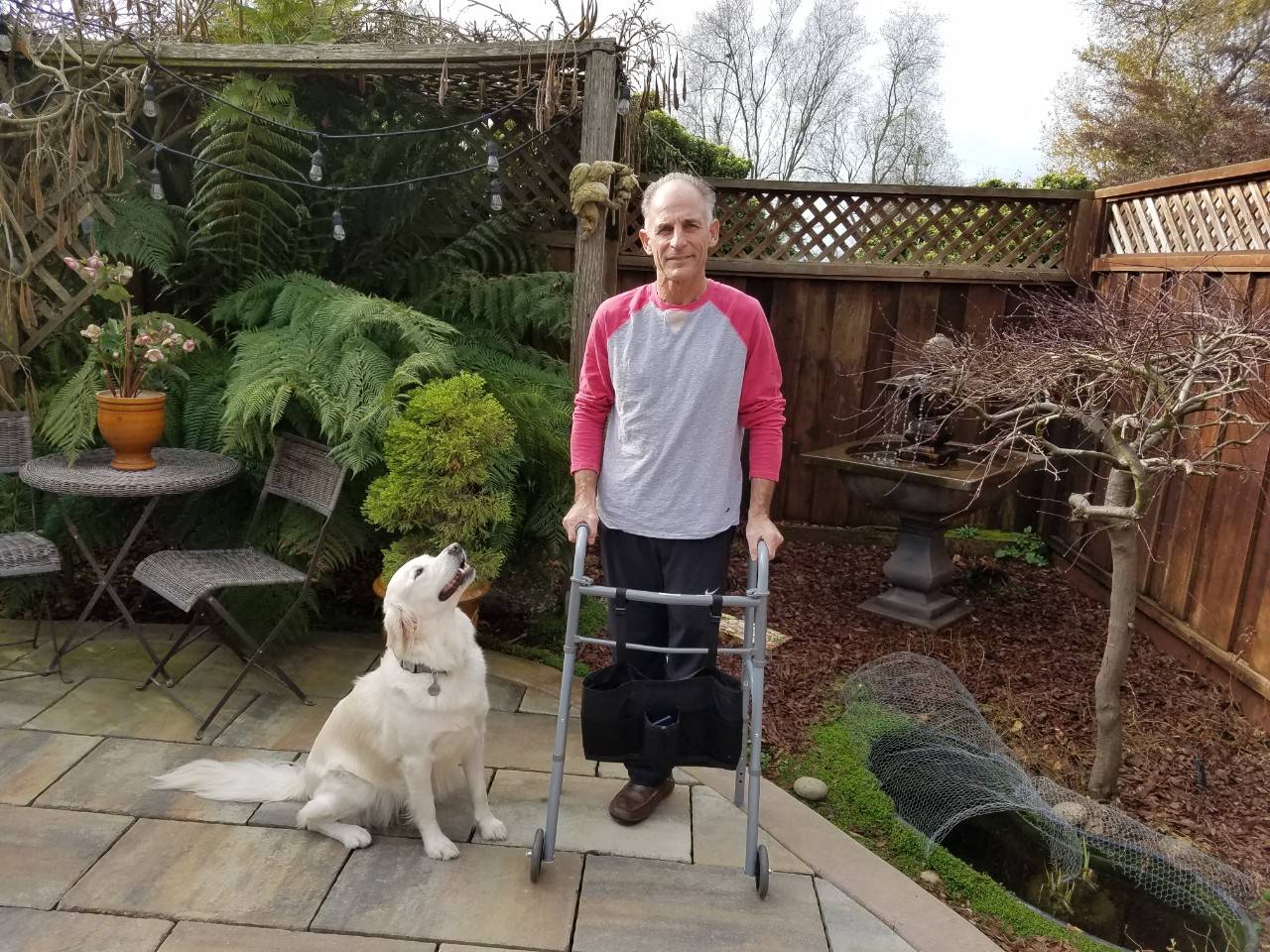 Danny Lucas, shown here at his Watsonville, Calif., home with his dog Stella, needed 24 units of blood following a hunting accident in Montana in November.

A California man accidentally shot during a Montana hunting trip is alive today because of the quick actions of emergency responders and the generosity of blood donors. And a Montana Red Cross volunteer is working to help recognize those efforts.

Danny Lucas Sr. was hunting with family and friends in a remote area outside of Lewistown in November when a rifle accidentally discharged while being unloaded from their pickup. The bullet hit the fire department captain in both legs, shattering his left femur and tearing his femoral artery.

Lucas’ father-in-law Ramon used his belt to make a tourniquet while the group desperately called 9-1-1. Because of poor cellphone coverage, the family and dispatchers made a dozen calls back and forth before they could relay the hunters’ remote location. The hunting party then loaded Lucas into the truck and headed down rural roads to meet the Denton ambulance.

About 90 minutes after the accident occurred, Fergus County Sheriff Deputy Kirby Dempster and the ambulance met the hunters and loaded Lucas into the ambulance bound for the Central Montana Medical Center in Lewistown.

Doctors there performed emergency surgery to stop the bleeding before Lucas was flown to Billings. Because he had lost so much blood and the damage was so extensive, the decision was made to amputate the lower part of his left leg. After 41 days in the Billings hospital, Lucas was finally able to return to his home in Watsonville.

When it was all said and done, more than 20 people across several agencies played a role in keeping Lucas alive.

Working with other community partners, Montana Red Cross volunteer John Koch helped organize an event in Lewistown in early April to recognize those responders, but the ceremony was postponed because of the coronavirus outbreak. They hope to reschedule.

“The doctors in Billings told Danny that had it not been for the people and the treatment and care he got all the way from the time of the incident until he woke up in the hospital in Billings he would not have made it,” Koch said.

Lucas, who’s 60, received a remarkable 24 units of blood during his treatment and recovery, two times the amount of blood a typical adult male has in his body. Lucas is a blood donor himself who has donated close to eight gallons, and Koch worked with local media, Red Cross biomedical staff and the Lucas family to tell this miraculous story of survival and promote an April blood drive in Lewistown. Organizers added a third day to the every-other-month drive, which collected 145 units, 45 more units than usual.

“The community really did step up,” Koch said. “It’s neat to see that.”

Lucas continues to recover at his home in Watsonville and hopes to return to work at the fire department. He is also helping promote Red Cross blood drives in his hometown in an effort to make sure others also have access to lifesaving blood when they need it most.

“I was taught a long time ago that life is less about you and more about what you can do to help others,” he told the Northern California Coastal Region Red Cross. “People really came to my aid in my time of need, so I want to get back to giving back now that I’m home again.

“From the first-responders to the personnel at the Lewistown hospital who stopped the bleeding to save my life, I have never met you but my admiration cannot be expressed here. To the entire staff of Saint Vincent’s Hospital in Billings our feelings to all of you are the same. Finally, to the Billings Fire Department, you epitomize the brotherhood of firefighters.”

To read more about Danny, his recovery and the need for lifesaving blood check out these stories: