A few weeks ago, a smoke alarm began chirping somewhere in Glyn and Belva Verzatt’s Helena home. The alarms were 19 years old and the couple couldn’t figure out which was the culprit. One by one they began replacing batteries, with Glyn, age 85, up on the ladder, and Belva, 84, holding on below.

Then, as luck would have it, all three alarms began chirping. So Glyn took them all down, sprayed them with compressed air to clean the computers and put them back up.

That seemed to the trick, but just a couple of days later, as Glyn was reading the newspaper, he saw a story about the Montana Red Cross and the Helena Fire Department planning to install free smoke alarms in Helena homes. They decided to sign up.

“They were working OK but old enough they needed replacing,” he said.

Not long after, a Red Cross volunteer team arrived at their door and installed free smoke alarms throughout their home. Each alarm was equipped with a 10-year battery meaning Glyn, who’s on oxygen, won’t have to get back on a ladder any time soon.

That’s a big relief to Belva.

“We don’t have to worry about it anymore,” she said.

Glyn also has difficulty hearing so the next day the team returned with a free bed shaker alarm – an alarm that vibrates and will wake Glyn during the night if there’s a fire. 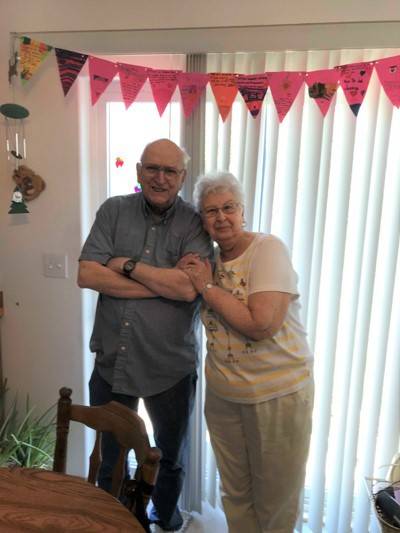 Volunteers also talked with the Verzatts, who have been married for 67 years, about the best ways to escape their home during a fire. Glyn is a Korean War veteran whose professional career included work as an insurance investigator and a real estate agent before retiring from the Montana Department of Transportation where he worked as a Right of Way agent for 10 years. Belva worked in the registrar’s office and the business office at Montana State University.

Both are grateful to the Red Cross and its volunteers for making their home safer.

“Everyone was very professional and very friendly and nice,” Belva said. “We very much appreciate what you did.”

The Verzatts were one of more than 40 families the Red Cross and the Helena Fire Department visited over two days in early May. Teams installed 110 alarms and taught families about fire safety. The Helena event was part of a nationwide Red Cross effort to install 100,000 alarms in homes in 100 U.S. cities during a two-week push this spring. Since 2014, the Red Cross and its volunteers have installed more than 1.5 million smoke alarms and saved more than 580 lives.

If you would like the Red Cross to install free smoke alarms in your home or test your alarms, visit www.redcross.org/local/montana/about-us/our-work/home-fire-campaign/home-fire-safety-visit.html or call 800-272-6668.