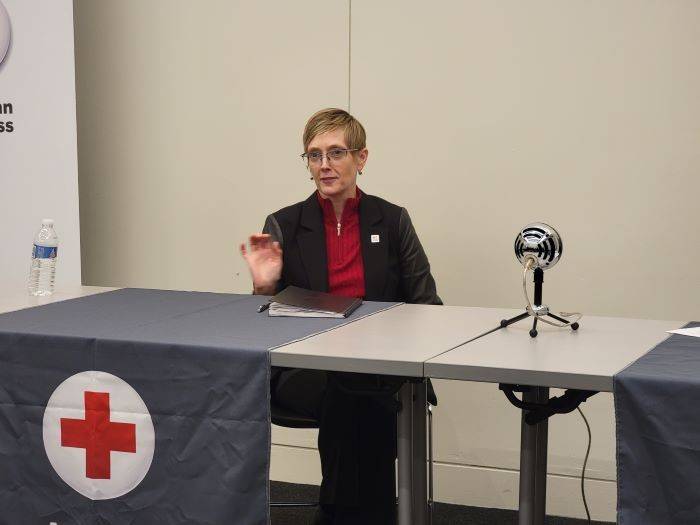 A few weeks ago, the American Red Cross in Greater New York, through its International Services program, hosted a discussion with Laura Olson, the Permanent Observer of the International Federation of Red Cross and Red Crescent Societies (IFRC) to the United Nations. As the IFRC’s team lead at the UN in NYC, she also holds the title of IFRC Head of Delegation.

During the event, Olson discussed the role of the IFRC, its history, and the global Red Cross Movement, which consists of the IFRC, the International Committee of the Red Cross (ICRC), and the 192 national Red Cross and Red Crescent Societies. As Olsen noted, these national societies are driven by the work of about 15 million volunteers worldwide. The specific role that these individuals who give back to their communities varies from country to country, but ultimately, they provide a local voice and point of view to crises large and small.

At the United Nations in New York City, both the IFRC and the ICRC have permanent observer status. They can participate in meetings, as well as conferences, but they cannot vote on UN Resolutions.

The IFRC represents the 192 national Red Cross and Red Crescent societies with the goal of promoting their shared humanitarian mission, while the ICRC’s main role is more specifically related to conflict and International Humanitarian Law.

The IFRC grew out of the post-WWI League of Red Cross Societies (which later added the Red Crescent societies) and received observer status at the United Nations in 1994.

One of the main approaches the IFRC utilizes to achieve its goals is to ensure that the individual societies have sufficient capacity to carry out their work. This is done by a combination of providing expertise, funds, and forging bonds of cooperation between societies. In times of emergency the administrative secretariat of the IFRC assists in coordinating a response by marshaling the specific skill sets and expertise of various societies, collecting and disbursing funds, and providing on the ground support such as technology solutions to the responding societies. Additionally, the IFRC’s UN status provides a connection to UN agencies that aid in times of emergency.

There are issues that affect humanity in different ways particularly with respect to individual governments. Thus, the IFRC will act as an advocacy representative to ensure that the vulnerable are not being ignored. The IFRC will also amplify the voice of an individual society that is accomplishing notable and unique initiatives. As the Red Cross Movement is an organization based on principles of neutrality, they have a unique perspective as well as a clear voice to work through some of the most intractable issues that the world is faced with today. As Olson said: “We need to be a constant presence to remind who we are speaking for. Ultimately, who are we speaking for? That is the most vulnerable.”