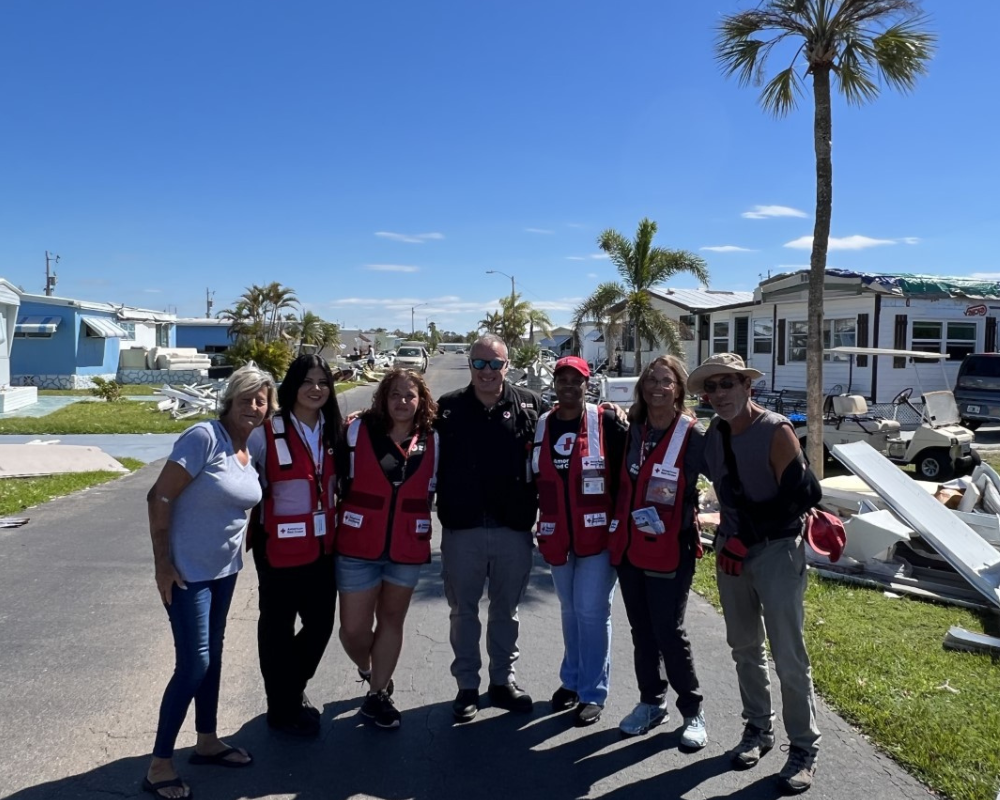 Magnolia Chiri Garcia has always enjoyed helping others, according to her father Luis Ferando. She was first trained in CPR when she was 14 years old, and later became an EMT. Magnolia is a Disaster Action Team Captain in Suffolk County, with the American Red Cross on Long Island.

When Hurricane Ian struck Florida in September 2022, Magnolia joined the team of more than 2600 trained Red Crossers who headed to the Sunshine State to provide relief. She deployed as a Disaster Assessment Supervisor, traveling to areas affected by Ian to collect data on the damage impact to homes.

One evening in Fort Meyers, Fla., Magnolia and her colleague, David Brown, Disaster Program Manager for Central and Midcoast Maine, observed what at first appeared to be some storm debris. Upon closer examination, they realized that it was a victim of a motor vehicle accident with serious injuries.

Both David and Magnolia quickly jumped into action to help.

As David notified 911 and directed traffic around the injured individual, Magnolia called upon her EMT training to assess the patient, who had severe road rash as well as a fractured skull. He was also suffering from critical blood loss. Magnolia had to provide immediate care until the ambulance arrived. She began to apply pressure to staunch further blood loss and was about to begin CPR when local EMT’s arrived on scene to take over the care of the patient.

It was a moment not lost on Magnolia who realized that paying forward help and support is always important. She in a recent conversation that there is an “incredible value in service to others. While we don’t get paid, our job is priceless.”

Magnolia has overcome many obstacles to be able to help others. She was born in Peru and moved to the United States at age 12. In October of 2012, when Superstorm Sandy struck the east coast of the United States totaling over $65 billion in damages, Magnolia joined her mother to volunteer in Deer Park to feed others with the Red Cross.

This experience left a profound impression with Magnolia, and as soon as she turned 18, she joined the Red Cross as an official volunteer. She also became an Emergency Medical Technician (EMT).

While serving as an EMT, during a call, one of the oxygen tanks in the ambulance broke free and struck her head causing severe injuries leading to a Traumatic Brain Injury. After a strenuous rehabilitation period, Magnolia matriculated to Suffolk County Community College and then Stony Brook University. She also re-joined the Red Cross, becoming fully qualified as Disaster Action Team supervisor, a shelter supervisor, and a Disaster Assessment supervisor. You can hear more about her personal journey in this video.

Thank you, Magnolia, for your commitment to helping others!

10 Ways to Keep Your Pets Safe this Winter
.type=article.p=1
View All
/content/redcross/en/local/new-york/greater-new-york/about-us/news-and-events/news/red-cross-volunteer-uses-training-to-help-both-while-at-home-and