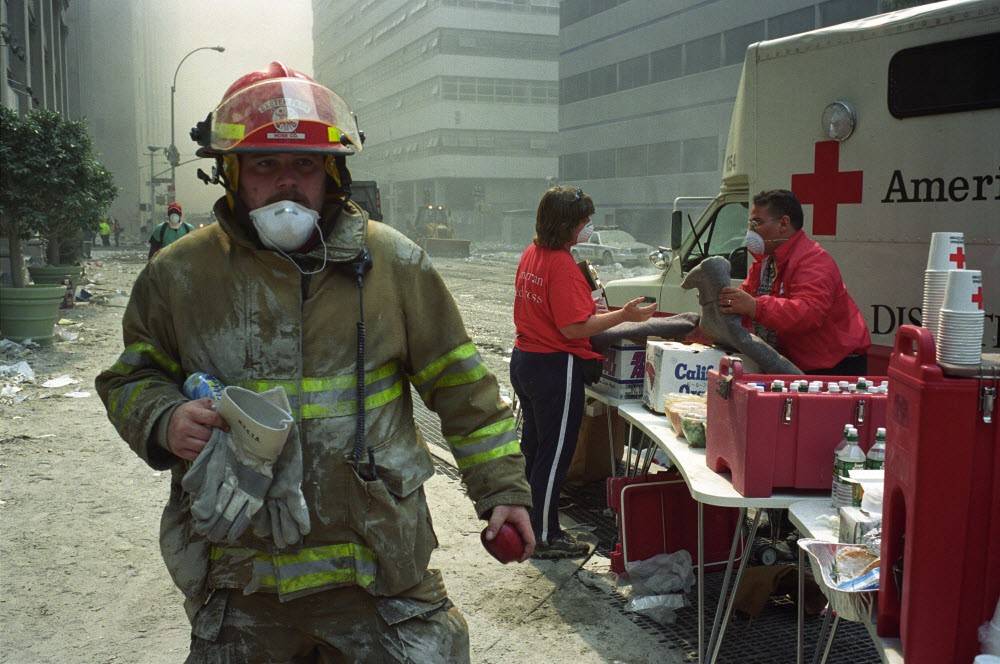 September 11, 2001, marks one of the most devastating days in American history. Over twenty years later, many can still recall their own 9/11 experiences as if they’d happened yesterday.

Through their grief, Americans came together in unprecedented ways to respond to the unimaginable events. Many offered their time and compassion to others while struggling to cope with the tragedy themselves. Some were inspired to become Red Cross volunteers, helping the country cope and heal by working at the front lines of the organization’s massive relief effort, or simply supporting their own neighbors.

"We owe so much to all who gave of themselves to help our city and our nation heal,” Mary Barney, CEO of the American Red Cross in Greater New York, said. “Two decades later, we continue to honor the heaviness that this day carries, and we offer our compassion to every American still grieving.”

In the hours following the tragedy, the Red Cross initiated a relief effort that would last years and span the nation, ultimately involving more than 57,000 team members. The majority were volunteers, including thousands who had joined the organization for the first time.

Over twenty years later, many are still active team members who regard 9/11 as the inspiration for their long and continuing Red Cross journey. Each holds memories of that day that are tinged with moments of both grief and hope.

These are some of their stories: 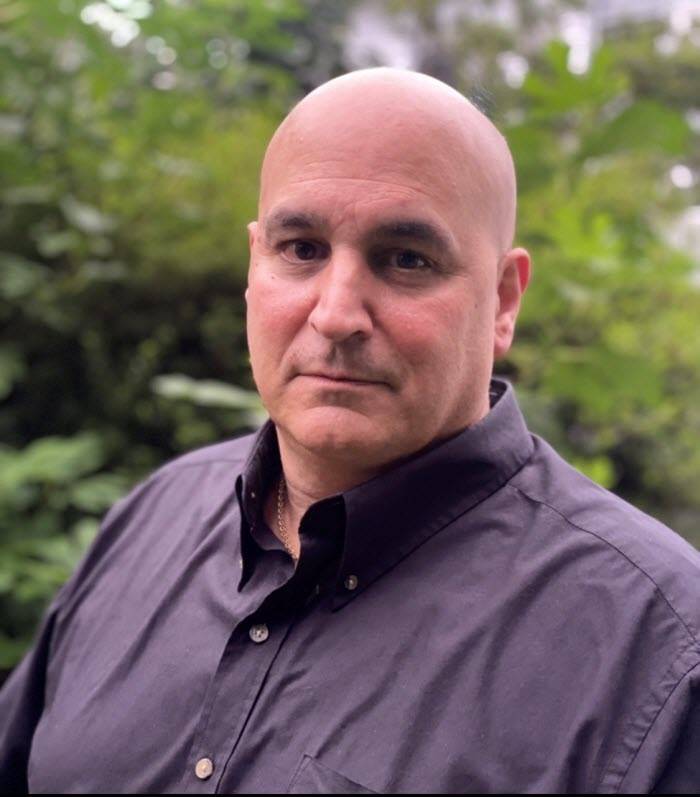 Like many New Yorkers, Sal Montoro vividly remembers the events of 9/11. From his workplace in Long Island City, he watched smoke fill the blue sky from across the East River.

Within hours, Montoro and staffers from the lumber company where he worked had mobilized to haul building materials to the site of the fallen towers to support the recovery effort. He recalls slicing open his hand while operating a forklift. As fate would have it, he was treated by members of a Red Cross relief team stationed in the Financial District.

“I promised that when I had the time, and when all the crisis started to slow down, I would look into joining the Red Cross,” Montoro said. “I ended up joining in January.”

An additional inspiration for Montoro was the death of a friend who had been in one of the towers.

“I always keep his picture with me in my Red Cross bag,” Montoro said. “It reminds me why I’m doing this.”

Montoro has since taken part in relief and recovery efforts following both local and national disasters, as well as encouraged his son and daughter to become volunteers. He credits 9/11 as a turning moment for him in his relation to volunteer service and community aid.

Looking back on the events of 9/11, Montoro said that visiting New York’s Financial District still evokes dark memories for him. In his mind, he hears the sirens that blared to notify volunteers that surrounding buildings were about to collapse and they needed to flee the area. He also recalls the moments of silence that followed the discovery of bodies amid the rubble.

“I think that we should just never forget.” 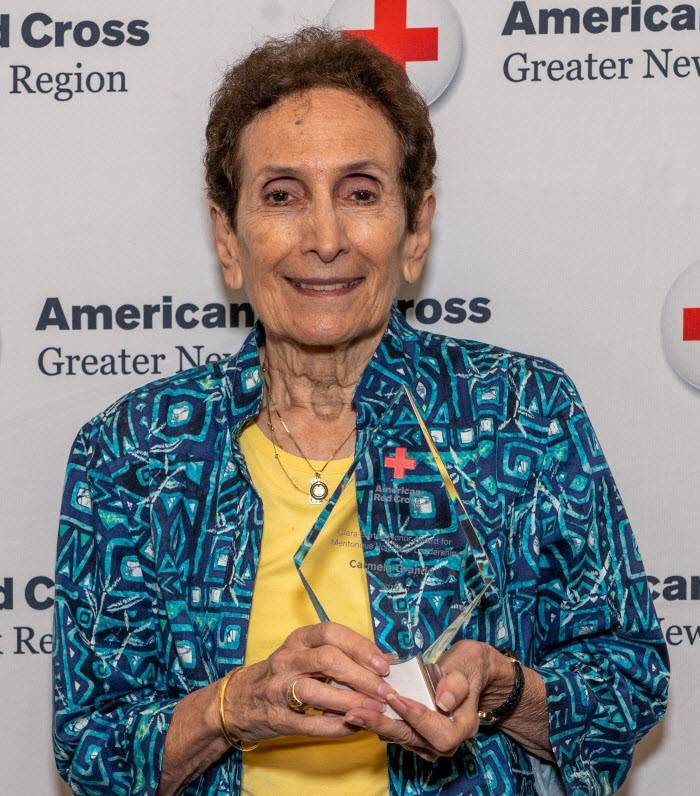 Carmela Grande, a longtime nurse, was out of the country in New Zealand at a work conference as events unfolded on 9/11. She recalls the people around her being so supportive and comforting, knowing she was a native New Yorker.

Upon her return, she immediately sought out the Red Cross to engage in the recovery efforts, initially by making beds at a relief center for exhausted first responders and other volunteers working around the clock near Ground Zero.

“I did anything they wanted me to do,” Grande said. “I made more beds than I made in my whole nursing career.”

She also supported families whose loved ones had been killed in the attacks or were still missing. One moment stands out to her from that time: assisting a pregnant mother who had lost her husband in the tragedy.

“There were many families like that,” Grande said, her voice breaking. “You didn’t even have to talk. Just hold their hand.”

Grande admits that she did not think she would stay with the Red Cross for 20 years. It was the people — fellow volunteers and those in need of assistance after emergencies — who have kept her engaged, she says.

Since 9/11, Grande has provided health support to those impacted by countless emergencies in NYC and across the country.

“We’re here to help them in crisis,” she said. “That’s the part of it that keeps you going: to help others.” 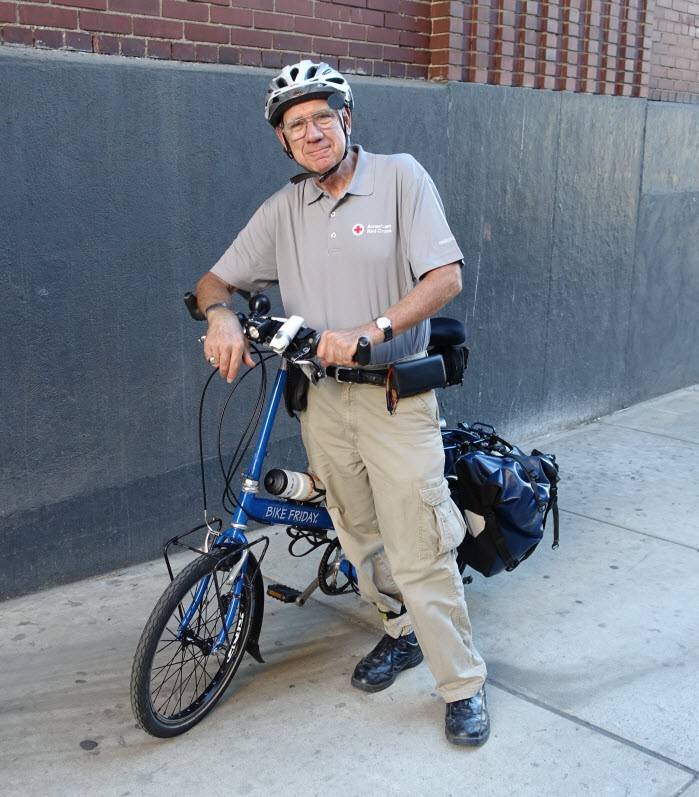 Richard Sanford was a high school teacher in Brooklyn when the tragedy occurred. He remembers seeing the smoke from the collapsing towers and immediately understanding the severity of the situation. He also knew that he needed to inform his students about what had happened.

“I saw one boy was very nervous,” Sanford said, “Very shaken up. I said to him, ‘Are you OK?’ He said, ‘My mother works in that building.’”

He then learned that the child’s mother had not yet left for work that day. “I remember saying to him, ‘She may not have a job tomorrow, but you got your mother.’”

Having fond memories of supporting the Red Cross as  a child, Sanford was immediately prompted to join the organization's relief efforts.

“My job was to shuttle people from the Brooklyn headquarters to the 9/11 site — what they call the Ground Zero site,” Sanford said.

This was the ideal job for the native New Yorker who, in addition to being a teacher, also worked as a tour guide. Sanford recalled spending months giving mini tours to the volunteers, pointing out the city's different landmarks as he shuttled them across the area.

Sanford recalls the gratitude that people had for the Red Cross, particularly following the events of Sept. 11.

“Any time we did something, and they saw that Red Cross van,” Sanford said, “people just opened up to us.”

He also remembers the sorrow that came in the aftermath and the way the New York atmosphere changed.

“It was a very sad time; it was a difficult time. We couldn’t wait for the city to come back to life,” Sanford said. “The smell of the building burning just stayed with you, and it probably still stays with me today.”

Following the 9/11 recovery effort, Sanford knew he would remain with the Red Cross. He now serves as a Red Cross preparedness trainer and teaches volunteers how to drive Emergency Response Vehicles. Recently, he supported relief efforts for victims of California wildfires.

The ability to aid people after disasters and crises, and the ability to make a change in their lives, is what makes his work with the organization meaningful to him.

“I never felt that I would leave the Red Cross, since 9/11. I felt at home. You know, as a kid I was with the Red Cross as a volunteer, and as a teenager, and then I came back home again after 9/11. So it was very meaningful to me.” 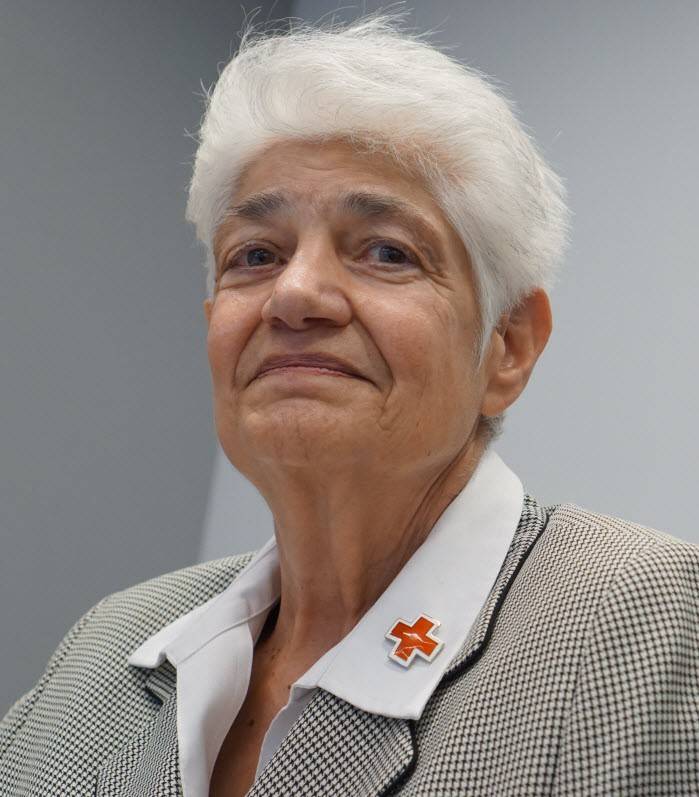 Georgine Gorra, a native New Yorker with longstanding roots in downtown Manhattan, watched the first plane hit the Twin Towers from her living room in Brooklyn. She had a gut feeling that the turmoil was only going to get worse.

“I called everyone I knew who was down in that area, including people in the World Trade Center themselves. I said: ‘You get out,’” Gorra said.

Luckily, everyone she knew made it out of the area unharmed.

A social worker and professor, Gorra had experience teaching courses on death and resiliency; her expertise in these fields would be crucial to recovery efforts. Within hours of the tragedy, Gorra had already contacted the Red Cross and walked to the organization’s Brooklyn office to begin her volunteer work helping to calm those struggling with the unfolding events.

“They asked me if I was going to leave New York,” Gorra said of a group of frightened tourists she encountered a few hours after the attacks. “I said ‘Absolutely not.’”

Many times, Gorra’s job was simply to listen to what those affected had to say and comfort them as best she could. But like the individuals she was helping, Gorra’s perspective on life was changing.

While she acknowledged the pain it brought, she also respected the way 9/11 changed her worldview.

“How do you know how something like that is going to transform you?” she asked. “But it will transform you if you let it.”

Like many Red Cross members, Gorra did not expect to volunteer for 20 years. She credits the fulfilling work she has done through the organization with keeping her on board.

“[Red Cross team members] were finding things within the Red Cross — and there were so many things to do that I would fit into, that I would be good at and enjoy,” Gorra said. “That’s why I stayed.”

Since joining, Gorra has volunteered with nearly every department in the organization, including Disaster Cycle Services, Service to the Armed Forces, and International Services. Reflecting on her time with the Red Cross, Gorra said that all her experiences have given her an overarching sense of belonging — as well as a community of people all “cut from the same cloth.”