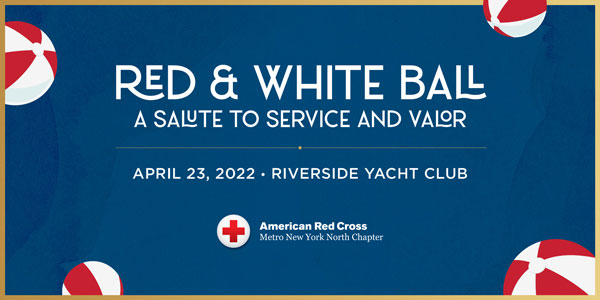 “To all who have supported the critical work of the Red Cross, we say THANK YOU! Whether Americans give of their time, talent or treasure, their commitment to helping one another should serve as an inspiration to us all. The community and civic partners we will honor during our Ball embody the best of this spirit. We look forward to celebrating our mission together,” said Stephanie Dunn Ashley, CEO, American Red Cross Metro NY North Chapter.

“We are so appreciative of the dedication of our committee members, who have worked tirelessly to create a spectacular sold-out event to support the lifesaving work of this volunteer-powered organization,” said Chrissy Magliocco von Oiste and Lauren E. Walsh, co-chairs of the 2022 Red & White Ball. “We are grateful for the overwhelming commitment shown by partners, sponsors, and guests of the 2022 Red & White Ball. We can’t wait to have a Ball!”

Honorees for the evening include:

Exceptional Service Honorees: General Mark A. Milley and Mrs. Hollyanne Milley
General Mark A. Milley and Mrs. Hollyanne Milley exemplify a lifetime of service to our nation. As the 20th Chairman of the Joint Chiefs of Staff, General Milley is the nation’s highest-ranking military officer, and the principal military advisor to the President, Secretary of Defense, and National Security Council. Mrs. Milley has served her community as a nurse for nearly four decades and is a dedicated volunteer with many organizations, including the American Red Cross.

The American Red Cross depends on the generous support of the American public to fulfill its vital mission. Proceeds raised during the fundraiser will enable the Red Cross to prepare for, respond to, and help people affected by disasters like hurricanes, fires, and countless other crises. Sponsors of the 2022 Red & White Ball include:

And many generous Benefactors, Contributors, and Patrons.

The Ball will feature fine wine and food, music and dancing, and outstanding live and silent auctions, which showcase one-of-a-kind items and experiences. The event is SOLD OUT. For additional details, to participate in the silent auction or make a donation to support the Red Cross please visit: www.redcross.org/redandwhiteball