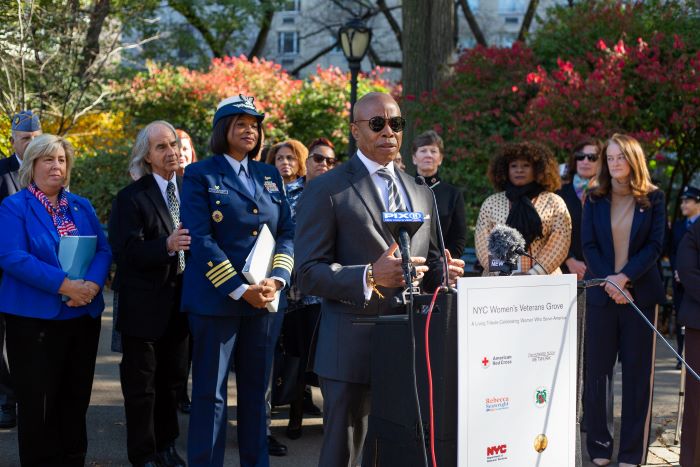 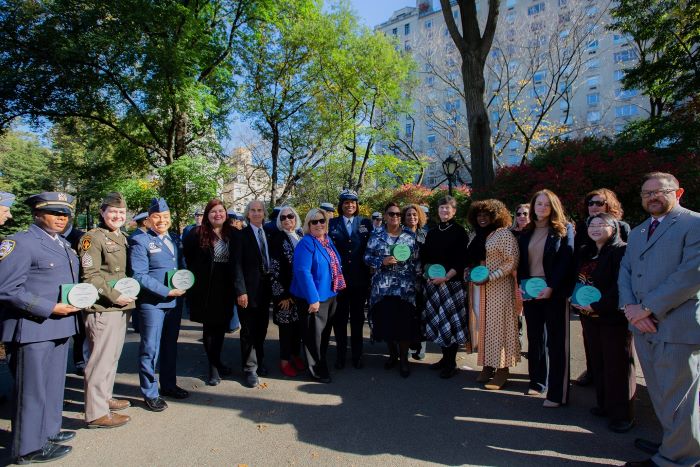 This tribute, now in its fourth year, is held at the Overseas Service League Flagstaff and NYC Women’s Veterans Grove in Central Park. The grove of 24 trees and flagstaff were conceptualized in 1925 as a tribute to American women, including American Red Cross nurses, who died overseas during World War One. Today, the living memorial of thriving trees located along Fifth Avenue from 69th to 71st streets recognizes women who served our nation in countless ways.

Below are the 2022 Women of Service for America Honorees who were recognized for their service:

The event concluded with a special recognition by CAPT Zeita Merchant and RADM Joanna Nunan, USCG Retired celebrating the 80th Anniversary of the Coast Guard Women Reserve (also known as the SPARs). The SPARs is a program, established in November of 1942 by President Franklin Roosevelt, that allowed women to legally enlist into the U.S. Coast Guard. This year the Coast Guard is New York City’s Featured Service for Veteran’s Day.

“More than 100 years ago, it was women’s participation in World War I – whether it was taking over men’s jobs on the home front or serving on or near the battlefield – that enabled us to emerge victorious,” said New York City Mayor Eric Adams, who attended the event. “Today’s ceremony ensures those women, and the many who served after them, are always celebrated and never forgotten. There are now more women than ever in the armed forces, and as we honor these eight women in service – including FDNY Commissioner Laura Kavanagh and NYPD Chief Juanita Holmes – we must also acknowledge that we need more women in every sphere of public life. I want to congratulate all honorees. Whether you are an armed forces volunteer or an intelligence officer in the U.S. Space Force, you are an inspiration to all New Yorkers.”

“One hundred years ago, women could not even serve in the US Military, could not even vote,” said Howard Teich, co-founder of the Eastside WWI Centennial Commemoration and one of the event organizers, “and today's ceremony is indicative of the great strides that have been made, with this honoring of women on the front lines of our Armed and uniformed services, and their continuing commitment to our community and country.

“We at the American Red Cross could not be prouder to join this special tribute, now in its fourth year. I want to thank our fellow event organizers for their vision and for shining a light on the women who serve our country, said Gregg Porter, Director, Service to the Armed Forces and International Services, American Red Cross in Greater NY. “I also want to express my appreciation to the countless women--our military service members, our community volunteers, and our public servants, to name a few--who give of themselves to help others.”

About the American Red Cross:
The American Red Cross shelters, feeds and provides emotional support to victims of disasters; supplies about 40 percent of the nation's blood; teaches skills that save lives; provides international humanitarian aid; and supports military members and their families. The Red Cross is a not-for-profit organization that depends on volunteers and the generosity of the American public to perform its mission. For more information, please visit redcross.org or cruzrojaamericana.org, or visit us on Twitter at @RedCrossNY.