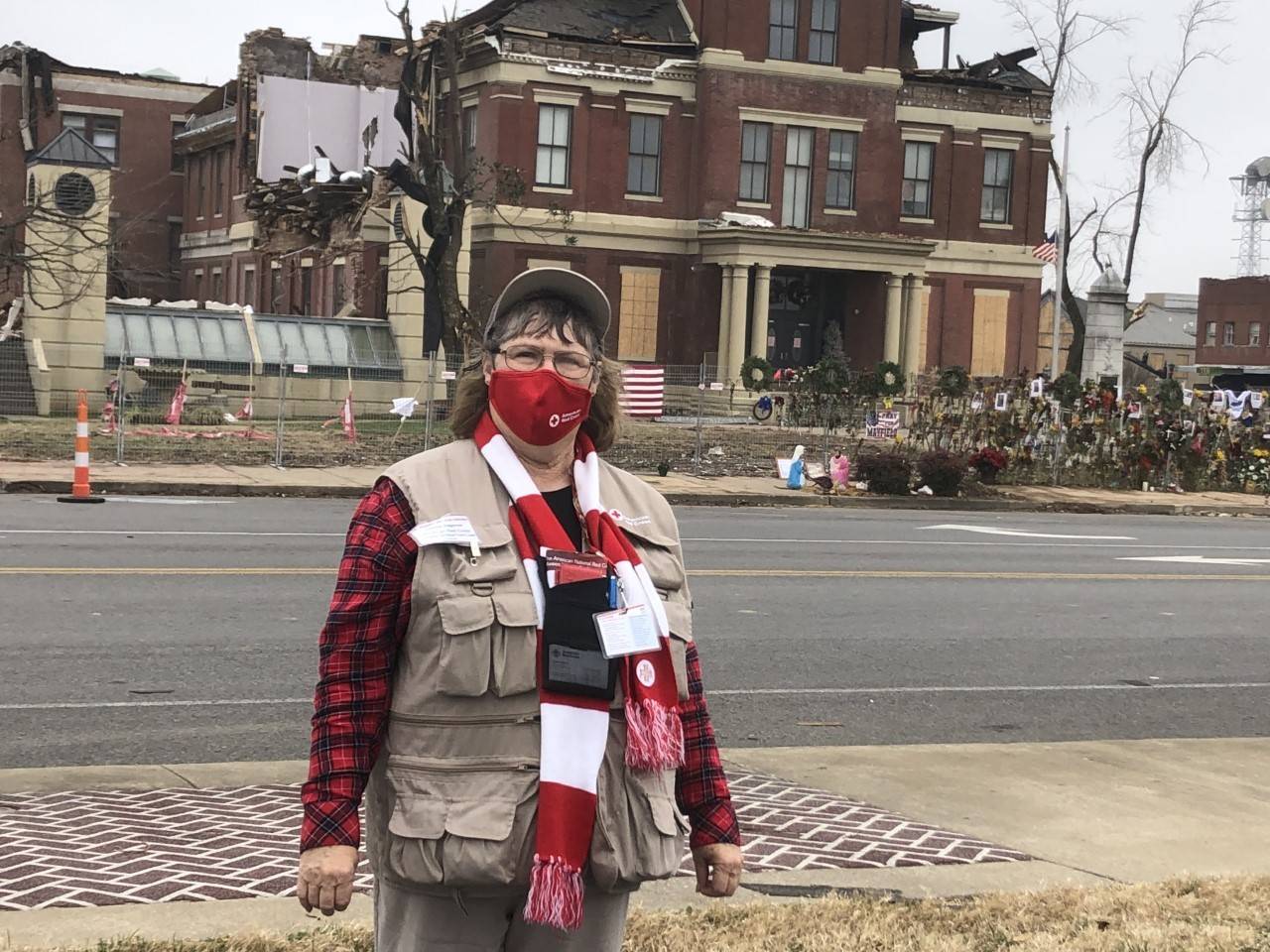 “When people are at the bottom, it is kindness, compassion, and a positive spiritual perception that can lift them up.”

“When people are at the bottom, it is kindness, compassion, and a positive spiritual perception that can lift them up,” said American Red Cross volunteer Connie Regener. With more than 15 Red Cross deployments nationwide, Connie exemplifies the Red Cross mission, delivering care and compassion during disasters all over the country. During her time with the Red Cross, she has led Disaster Spiritual Care Response (DSCR) teams through earthquakes, fires, floods and most recently in December of 2021, through a tornado response.

Before joining the Red Cross in 2013, Connie was a hospital spiritual care worker, often helping people on the worst day of their life. She said the Red Cross “used all her skills but in a different setting.” Although Connie started as a Disaster Action Team (DAT) member in 2013, when the Red Cross incorporated spiritual care volunteers into local chapters in 2016, Connie jumped on the opportunity. As the first Red Cross volunteer in the Southern California Region and one of the first in the U.S. to reach the DSCR designation, Connie, now a nine-year veteran of the Red Cross, has put her skills to work countless times.

Connie joined the Red Cross recovery effort in Mayfield, Kentucky on December 27, 2021, and while on the ground, witnessed two more tornados impact the area. Connie served as an Individual Disaster Care (IDC) and Disaster Spiritual Care (DSC) Service Associate (SA) and spent her time helping others impacted by the disaster get through the emotional damage caused by the devastating tornados. Connie and her team accompanied nurses on urgent medical calls and spent time providing spiritual care to individuals that she said “were running out of hope.”

As a leader, Connie was responsible for teaching an Integrated Care Condolence Team (ICCT) class to prepare nurses, other mental health staff, DSCRs and caseworkers to better assist the clients they met during the disaster response operation.

Connie’s ability to console others led to one client’s “grief and pain spill[ing] out” after they lost their spouse a few months prior; however, with Connie’s experienced guidance, “they gained a lot of calmness, reassurance, and self-love.” But Connie’s help didn’t stop here; she spent her time counseling Red Cross staff supporting the recovery as they were homesick during the holidays. Even when Connie herself missed New Year’s, she felt it was important for her to relieve the Red Cross volunteers who had missed Christmas due to their deployment.

Connie’s story represents the self-sacrifice Red Cross volunteers make every day. And while “Some people run away from disasters,” Connie said that she is part of a select few that are “wired to respond.”