Sound the Alarm for Stanton Residents 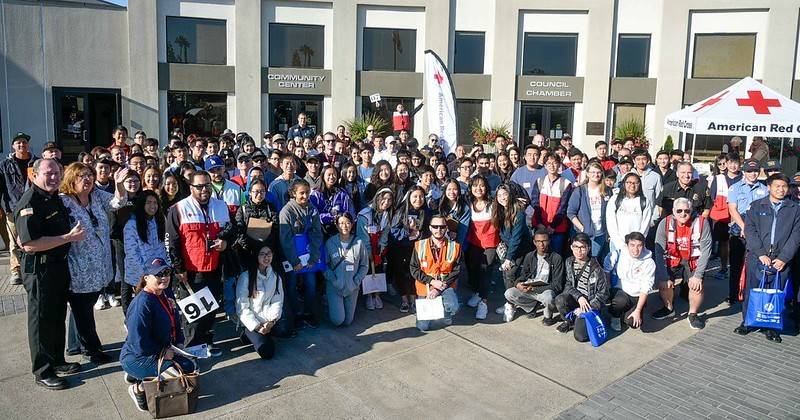 “I did not know the Red Cross did this for people. What a great service! It’s nice to know that donations go to services like this.”

Every day, seven people die in home fires. Most of these tragedies occur in homes that lack working smoke alarms. The American Red Cross wants to improve the odds and save lives - that's why we launched our Home Fire Campaign in 2014. Sound the Alarm events, during which Red Cross volunteers and partners go door-to-door to install free smoke alarms and provide home fire safety information, are a critical part of the campaign. In just six years, these home visits have accomplished so much, including the installation of more than 2 million smoke alarms and preparing more than 2 million people against home fires across the nation.

On January 18, 2020, the Red Cross hosted a Sound the Alarm event in Stanton, California, with over 150 Red Cross volunteers and partners. Trained educators provided over 500 residents with home fire safety information and 382 smoke alarms were installed.

Here are just a few of the meaningful ways the Red Cross was able to touch peoples’ lives that day:

Eighteen-year-old Kim Wymer sits on the board of directors at her school’s Red Cross Club, donates blood annually and facilitates CPR trainings. She has certified more than 100 people in CPR over the past three years and volunteers about eight hours each week for the Red Cross. She plans to go to college after graduation to study business, English and education.

Ms. Bautista stated, “I am so grateful for this! Six of us live here and having four alarms installed in our home makes it much safer. Thank you, American Red Cross!”

Wymer is one of the 97 teenage volunteers who sacrificed their Saturday morning to help the Red Cross make Stanton neighborhoods safer. Her team of seven people installed 40 smoke alarms that day. Kim was thrilled to install three of these smoke alarms herself.

When Red Cross volunteers knocked on the Moore family’s door, little did they know Mike and Paulette Moore were hosting a birthday party inside. Luckily, the Red Cross team came bearing gifts—five smoke alarms! The team installed these alarms in less than 10 minutes, giving the Moore’s home a free, much- needed fire safety update.

Mike Moore said he was thrilled by the generosity of the Red Cross. “I did not know the Red Cross did this for people. What a great service! It’s nice to know that donations go to services like this.”

Stanton resident Karyl Lehman thought her home security company had installed all the necessary smoke alarms.
But, when the Red Cross stopped by and offered to evaluate her home, she discovered she needed four additional smoke alarms to make her home safe.

“Thank you, Red Cross. I wasn’t sure we had enough, and I learned about where smoke alarms should be installed. This saved me money and now I’m sure we’re as safe as possible,” said Lehman.

At this Sound the Alarm event, the team of young men went door-to-door installing smoke alarms while giving tips on installation, maintenance and home fire safety. With the help of others on their team, they installed 40 smoke alarms in four hours.

“We always work together. We either have family members or friends who are firefighters, and we know we help people,” said Sells. “I’m grateful that this program exists for us, and thankful that the Red Cross does so much to help people with fire safety.”

Visit SoundtheAlarm.org/DTS to learn more and request a free smoke alarm installation in your home. If you would like to become a volunteer like the many humanitarians featured here, visit redcross.org/volunteer. 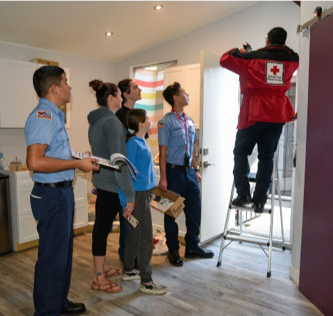 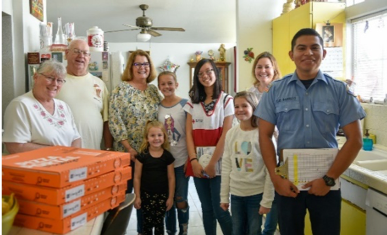 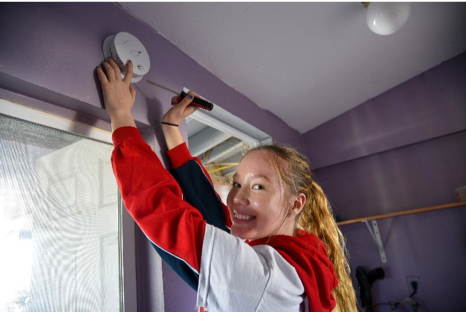 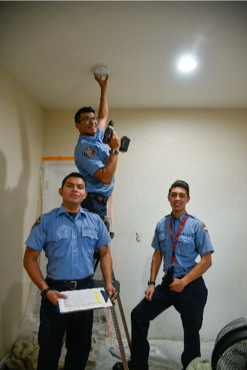 With the help of others on their team, these three Orange County Fire Explorers installed 40 smoke alarms in four hours.