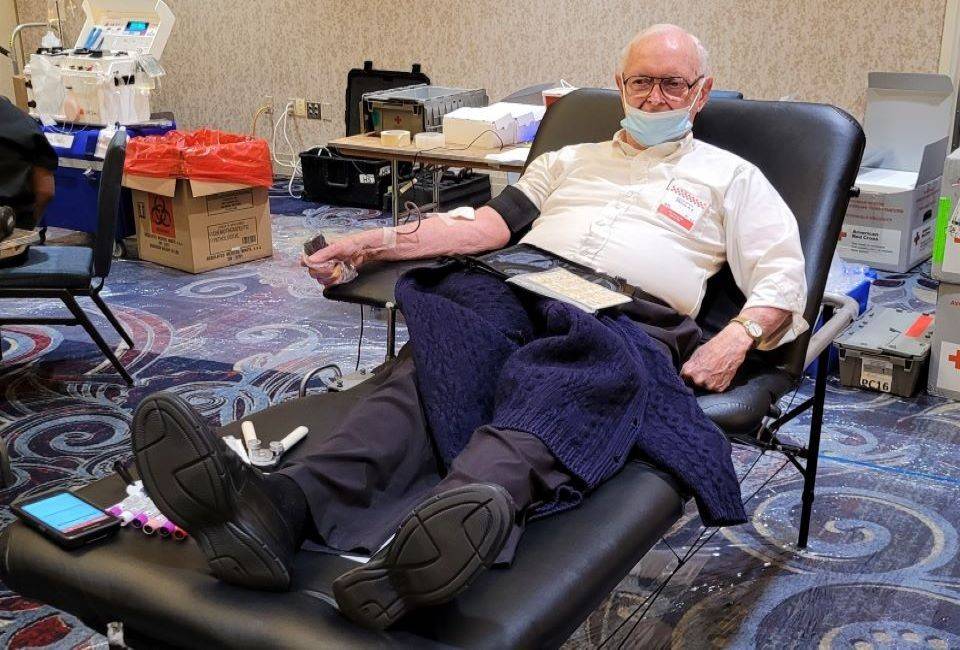 This Red Cross month, we’re celebrating all of our regular blood donors, like Tom Downes of Alexandria, Virginia. But Tom’s recent blood donation on March 9, 2022 was something special.

“This is donation number 253!,” he proudly exclaimed.

Tom has been rolling up his sleeve and giving blood every chance possible for over 60 years. He recalls the reason why he began his incredible streak.

“My dad was a beat cop in Chicago, and he got hurt really bad and needed 13 pints of blood,” said Tom.

That was back in 1959. Tom remembers how 26 of his father’s fellow officers donated blood to help save his life; and the impact those acts of kindness continue to have on him today.

“That got my attention. As a result, I started giving blood,” said Tom.

The need for blood is constant. In fact, every two seconds, someone in the United States needs blood. And a single donation, from donors like Tom, can help save more than one life.

Downes enjoyed a career with the Defense Intelligence Agency, playing an instrumental role in the lead up to the Cuban Missile Crisis. The federal government used his skills to determine where Russian missile bases had been established.

He worked there for 35 years, being assigned to locations in Missouri, Maryland, the Carolinas and Virginia. At each destination he’s made time to donate blood; and he has collected an impressive number of donation pins symbolizing his incredible record of donation.

He figures he’s donated an average of four times a year since the late 1950s. Determined to reach the 32nd gallon plateau, he’s already planned his next donation—pint number 254.

“They only allow you to donate every 56 days. I already have the next date I can come back and donate on my calendar,” said Tom.

In recognition of his record of giving blood, Tom was presented with a special Red Cross vest. He will also receive a letter of appreciation from national American Red Cross President and CEO, Gail McGovern.

Tom says he’s grateful to have been able to donate as much, and as often, as he has over the years and that no one should be afraid to give the gift of life.

“There’s no pain at all. I always enjoy coming and donating and helping people. And I get to lay down as well so it’s all good!”

Join Tom Downes this Red Cross Month and give the gift of life. Schedule a blood donation appointment at RedCrossblood.org