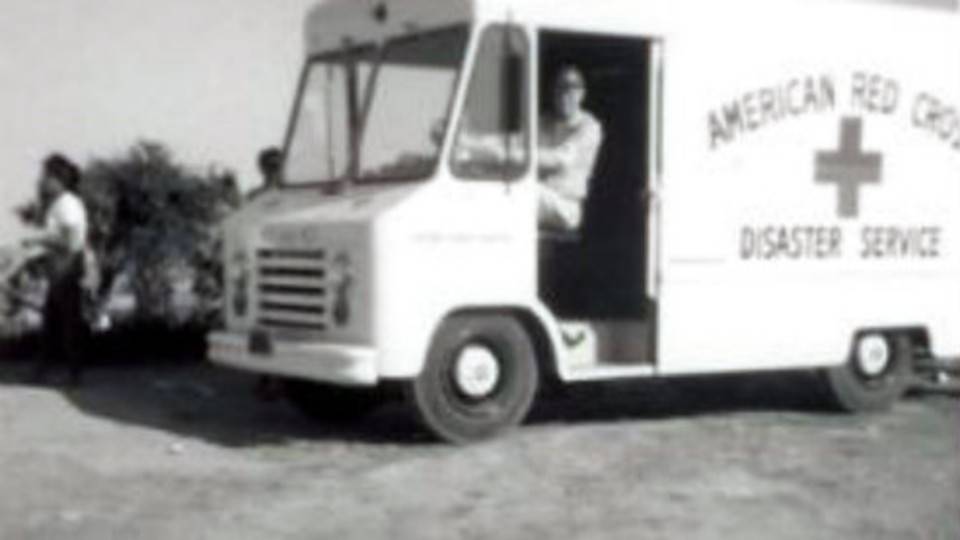 Johnson at the front wheel of a Red Cross emergency response vehicle, circa 1967.

“I am an advocate for volunteering,” exclaimed John Johnson, an 81-year old veteran who was honored for 60 years of volunteer work with the American Red Cross this past April.

Johnson grew up in northern Chicago, where public service was instilled in him from a very young age. He achieved his Eagle Scout status in 1952, giving him the basis and appreciation for volunteering.

While enrolled at the University of Virginia in 1955, as a candidate for a bachelor of science degree in aeronautical engineering, Johnson began his work as a ground team leader with the Civil Air Patrol. He explained that at the time, unfortunately there was no local rescue squad, local fire departments did not have rescue teams, and the only two ambulances in the area were run by funeral homes.

“This was a huge deficit for the community,” he explained. “In 1959, the remnants of a hurricane spawned a few tornadoes in the Charlottesville area. This is when myself and the Civil Air Patrol unit formed a rescue team to respond.”

That series of rescues gave Johnson the motivation for beginning his volunteer career in emergency services with the American Red Cross.

Embarking on his newfound volunteer path in Charlottesville, Johnson began as a lifeguard and an instructor of advanced first aid and water safety that same year. Every place Johnson has lived since, from Florida to California, including his 12 years of active duty in the Navy, he has volunteered with local chapters of the Red Cross.

“Clara Barton’s original concept was to establish community based local chapters,” Johnson remarked. “I feel proud that I was able to take part in so many of those chapters during my life.”

Johnson has mainly spent his volunteer time assisting with disaster services and emergency management. In 1961, Johnson was sent to an active duty station at Point MuGu, a California naval missile center. Upon his arrival, he immediately thought of his volunteer commitment to the Red Cross, and sought out the local chapter. Over the course of the following two years, he volunteered as first aid instructor.

In 1969, he was deployed in Key West, Fla. where he lived on Sugarloaf Key and became a civil defense warden. Acting in this role, he was tasked with overseeing emergency management there, which paired nicely with his volunteer role with the local Red Cross chapter.

In 1972, there was a hurricane and waterspout off the coast of the keys. “An entire trailer park village was wiped out,” Johnson recalled. “I was so busy rescuing people, thanks to my [Red Cross] training, I knew what I was doing.”

Following the end of the Vietnam War, Johnson was released from active duty. And in 1974 he received a call from the Patuxent River Naval Squad, which offered him an engineering job in St. Mary’s County that he recalled, “he simply could not refuse.”

So he made the move up to Maryland, where he has remained ever since. Upon his arrival at his new station, Johnson came to the pressing realization that there was not a qualified first aid or CPR instructor in the immediate area. Johnson saw this as his opportunity to take the lead in the local Red Cross chapter by immediately filling that gap. In 1975, Johnson began teaching a basic Emergency Medical Technician and advanced first aid courses at the Patuxent River base, while simultaneously responding to local emergencies in St. Mary’s County.

By 1998, Johnson deployed to Puerto Rico for relief efforts following Hurricane George. Upon receiving news of his deployment, Johnson had a moment of panic, as he had never studied the Spanish. “I quickly dug around my daughter’s bedroom and found her old English-Spanish dictionary from high school,” Johnson laughed. “In one week, I was not only answering the telephone in Spanish, but I was organizing bilingual field teams.”

He spent his three weeks in Puerto Rico as the designated local disaster specialist. “The hurricane went right down the middle of the island and caused devastation from the east to the west,” Johnson recalled.

He worked with local people on recovering salvageable items, and noticed that a lot of what the people needed during his time was encouragement to start piecing their lives back together again.

He prides himself on putting a large portion of his available time to good use. He not only volunteers with the Red Cross, but also with the Naval Civil Air Patrol, Salvation Army, Sea Scouts, Naval Cadets, and even acts as an amateur radio operator for the Coast Guard Auxiliary.

“Engaging in emergency service training and management is my idea of fun” he said with a chuckle, “there’s nothing like seeing all of your hard work tie together and partnerships are really important to me.”

When asked for one piece of advice to give to others, Johnson thoughtfully stated his life lesson. “If my experiences volunteering has taught me anything, it’s that you should try to do some good and encourage people to become self-sufficient and responsive in times of disaster,” he said with sincerity. “Take care of yourself first, so then you can take care of others.”

No doubt Johnson packed that care and his adventurous spirit in the completon of a recent trip to Iceland.

We salute Johnson on his exemplary 60 years of dedicated service to emergency management and disaster relief response with the American Red Cross. And for embodying the Red Cross fundamental principle of humanity.

The preceding article is part of a series on local Red Cross volunteers. We hope you will be inspired by their stories, then take steps to join our ranks as strive to help our neighbors prepare for and recover from disasters.