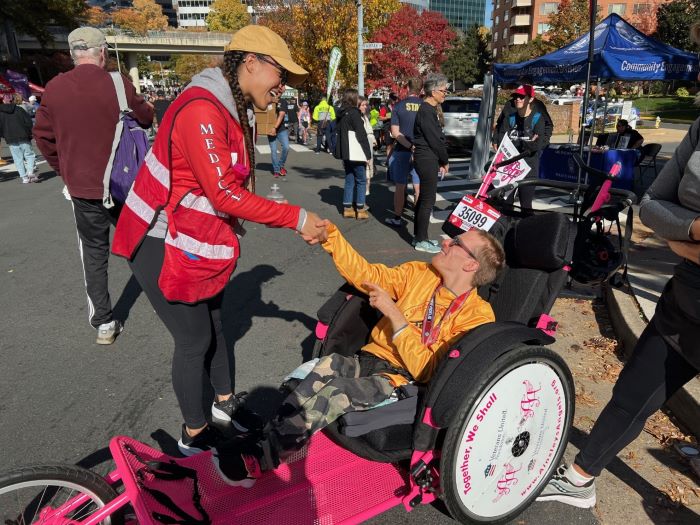 This year’s Marine Corps Marathon (MCM), also known as the People’s Marathon, has returned to its pre-pandemic glory after a two-year hiatus due to COVID 19. Swarms of bystanders wearing high-five signs stroll the finish line. “Run with purpose. Finish with pride,” reads one banner. “You inspire me,” scribbles James Thayer, to his wife.

That’s where Red Cross of the National Capital & Greater Chesapeake Region volunteer, Kathryn Harness, first met racer Nolan Peake. The first-time marathoner traveled with his family from Houston to race with Lieutenant Colonel Chris Story and Ansley’s Angels of America, an organization that makes endurance events like the MCM accessible to special needs communities across the country.

“The whole experience makes Nolan feel like a rock star,” says Nolan’s mother, Judy Peake. “He’s fearless. It makes me cry when I watch him,” she continues, as Nolan enthusiastically tells Kathryn of her volunteer work, “You’re awesome!”

With clipboard in hand, Kathryn spends the day watching over the MCM finish line and assisting runners in need of aid along the racecourse. She signed up this year so she could walk the route in honor of her father, Navy Captain Kirk Harness, and five other family members dating back three generations. Two in the Air Force, two in the Army, and two in the Navy.

“My father is no longer here with us. So, for me, it’s a way to connect to him. Show him that I care, Kathryn says, adding: “I have a special place in my heart for the military. They are near and dear to me; volunteering today is a way to also give back to those who are still alive. Still serving. It helps me show them that I care. They’re all right here with us today.”

The MCM is one of the largest marathons in the world. It begins in Arlington, passes by some of the nation’s most recognizable monuments and storied landmarks, and finishes at the Marine Corps War Memorial. Every step of the iconic racecourse honors the service and sacrifice of the American military, paying tribute to the honor, courage, and commitment of its participants. The American Red Cross is a proud supporter of our armed forces, and the Marine Corps Marathon, in particular.

“The turnout with volunteers this year was absolutely amazing,” says Courtney Cross, the MCM Event Director for the Red Cross. “The numbers just skyrocketed,” with a nearly three-fold increase in volunteers signing up for the event compared to previous years. “The response has been absolutely amazing,” she adds. “My entire life, I’ve loved helping people. I started a few months ago. This is a dream of mine.”

The Red Cross helps members of the military, veterans and their families prepare for, cope with, and respond to the challenges of military service. Volunteers provide 24/7 emergency communication services and other support to the military community across the National Capital and Greater Chesapeake region.

This Veterans Day, November 11, 2022, the Red Cross is recognizing veterans who continue their service in local communities across the country. As Kathryn points out, public service is a calling and a thread that binds veterans. What better way to pay tribute to some of the truly great heroes living among us. That applies to Nolan, the rock star. To Kathryn, the Red Cross volunteer. And thirty thousand others who showed up at the MCM during this year’s Military Family Appreciation Month in November.

As legendary humorist Will Rogers once famously said of people who are admired for brave deeds and noble qualities, “We can’t all be heroes, because some of us have to stand on the curb and clap as they go by.”