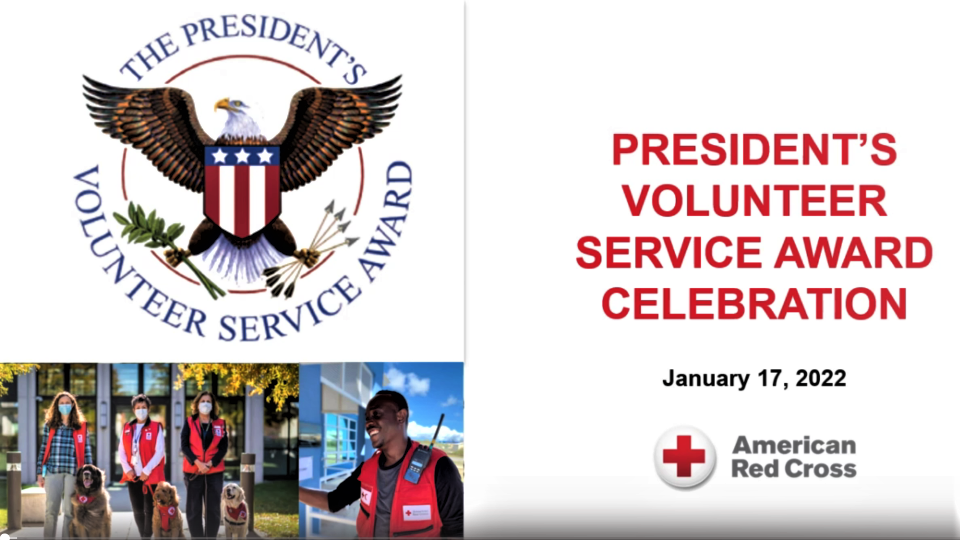 Dr. Martin Luther King Jr. Day is a day we honor a civil rights icon. It is also a day of service … a day on and not a day off. MLK Day 2022 was an especially poignant one for 27 Service to the Armed Forces volunteers from the Red Cross of the National Capital & Greater Chesapeake Region who received a President’s Volunteer Service Award, presented by Senior Vice President of Service to the Armed Forces and International Services for the American Red Cross, Koby Langley.

“The caliber and number of volunteers recognized for their annual and lifetime volunteer work in support of our Red Cross service to veterans, military members, and military families is truly remarkable and a reflection of the type of amazing individuals we have the privilege of working with day in and day out,” said a very proud Chris Duffley, Director of Service to the Armed Forces and International Services for the Red Cross of the National Capital & Greater Chesapeake Region.

The President’s Council on Service and Civic Participation founded the President’s Volunteer Service Award in 2003 to recognize the important role of volunteers in America’s strength and national identity. Led by AmeriCorps, in partnership with the Points of Light Foundation, the award honors individuals whose service positively impacts communities and inspires those around them to also take action.

At the Red Cross, Service to Armed Forces volunteers support U.S. military members, veterans and their families as Hero Care Network caseworkers, and facilitators of various workshops, like Coping with Deployments. They also help military families connect with a deployed serviceperson during an emergency; and make rounds at military hospitals to provide personal care items and encouraging words. Additionally, they are the respectful visitors who pay tribute to veterans as they near the end of their life’s journey.

“This level of achievement represents a person who’s dedicated their entire lives to improving the world around them,” said Koby Langley, while honoring the volunteer recipients, virtually. “They’ve dedicated themselves to being a humanitarian, to helping others in need.”

“All of these volunteers come with an extraordinary skill set, compassion, and desire to serve the members of the military and their families through countless hours dedicated to the Red Cross,” said Chris. “It was a thrill to see all 27 honored, especially on MLK Day, a day defined by compassion and service!”

Our National Capital & Greater Chesapeake Service to the Armed Forces team is always seeking those who #ResolvetoVolunteer to assist during 2022 and beyond. Visit redcross.org/volunteer to learn how you can help!