Remembering the Tragedy of September 11th, Renewing a Commitment to Service

Remembering the Tragedy of September 11th, Renewing a Commitment to Service 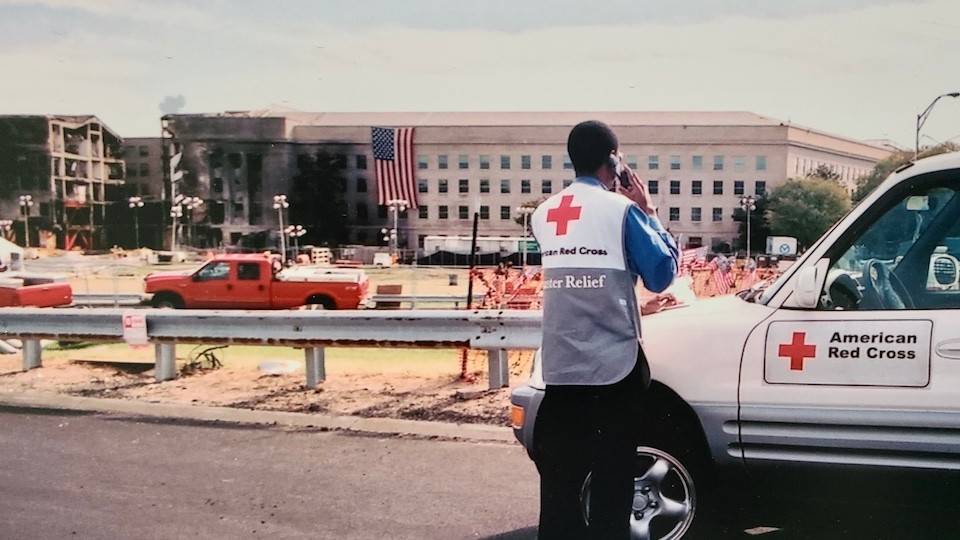 While 20 years have passed, as a nation we will always remember that day — where we were when we heard the news and what we did in the hours and days afterwards. Within minutes of Flight 11 crashing into the north tower of the World Trade Center, the Red Cross began mobilizing to provide immediate help. And the work continued for years.

Charles Blake was a passenger in a car on his way to another obligation when he received a phone call that a plane had crashed into the Pentagon. He immediately asked the driver to turn around and go back to the Red Cross office on K Street. As they made a U-turn, Blake saw thousands of people running out of office buildings.

Not yet sure what exactly they were facing, Blake was helping to set up a blood donation center at Red Cross Square to support the line of people outside looking to donate when he was asked to go to the Pentagon. For the next several days, Blake led the Red Cross team that worked with partners to set up a respite center—providing feeding, mental health services, and other support for first responders and the families who had lost loved ones in that tragedy.

“I was very proud of the Red Cross,” said Blake, now a Division Disaster Executive with the Red Cross in the South West and Rocky Mountain Division. “I’ve responded to a lot of disasters. This was definitely a whole coming together. We felt a huge responsibility to get this off on the right foot.”

The 20th anniversary of the attacks is a reminder that the unimaginable can occur, and that we all need to do everything we can to protect our loved ones by being ready for crises of any size.

“Families should always plan ahead on how to deal with the types of disasters that are likely in their neighborhood, what they will do if separated and how they will stay informed,” said Linda Voss, CEO for the Red Cross of the National Capital & Greater Chesapeake Region.

An emergency kit should contain food, water and other basic supplies to last at least three days for each family member. Including essential medications, copies of important documents and special items for children and pets should also be a priority.

The September 11th attacks were a seminal moment for our nation, as one of the worst days in U.S. history also brought out the very best of the American spirit. At the Red Cross, we remain grateful to those across the country who came forward with donations of time, blood and money to support the victims and survivors of the attacks.

“The country was supporting us with dollars, prayers. It was a scary time for us, but we came through,” Blake added. “Folks did a spectacular job taking care of first responders and families.”

Now, as the nation marks the 20th anniversary of that horrific day, we remember the victims, honor the brave responders, and rekindle the spirit of those dedicated to a life of service. Those like Charles Blake, who always stand ready to help a neighbor, or an entire community in need.