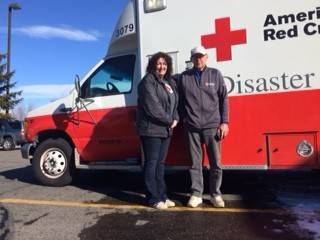 When I became a Red Cross volunteer in 2012, I couldn’t wait to finish my initial training so I could start responding to disaster calls and eventually deploy on national disasters. Once I studied the long list of options, there was no doubt in my mind what I wanted to do first -- become an emergency response vehicle driver.

Not only did it sound challenging and exciting, but also helpful to communities in need in so many ways.  Once my initial requirements like sheltering, food safety and feeding were met, I dove in head-first and took all the required courses. Once my road test was completed, I became a proud emergency response vehicle driver!

My first assignment wasn’t actually a disaster response at all, but actually the Western Days parade in Twin Falls. I remember well the pride I felt as the crowd waved and cheered as we drove by.

Many other assignments were to follow, including smoke alarm installs here in southcentral Idaho, hydration and first aid stations at air shows at the Twin Falls and Jerome County airports and numerous disaster action team calls.

But in 2017 the first truly big call came in – the chance to drive our ERV across the country to respond to a major disaster. Don Nesbitt and I were deployed to Houston to assist with Hurricane Harvey. We were stationed at Kitchen 11 in Sugarland.  Don was able to stay with our ERV as a driver who helped with feeding, and I was assigned as the kitchen supervisor. I had the privilege of sending our ERV, along with dozens of others, loaded with hot meals out to feed thousands of people daily throughout north Texas. We did this for five weeks until our mission was complete.

A few weeks ago, Jim Brown and I drove that ERV from Jerome to Idaho Falls to empty all the cargo into storage, then returned with an empty truck. This was to be the last mission for the ERV, which was decommissioned on March 10. The #3079 served Idaho proudly for many years, leaving behind a plethora of memories.

While #3079 has moved on, we have a new ERV in our stable. Don and I were fortunate enough to deploy cross-country again in 2018 on the maiden voyage of our brand new ERV, where we began a new chapter of memories in South Carolina for Hurricane Florence.

It was another emotional and rewarding experience, and I’ll be ready when the next opportunity comes my way to once again deliver comfort and care with the help of our emergency response vehicle.