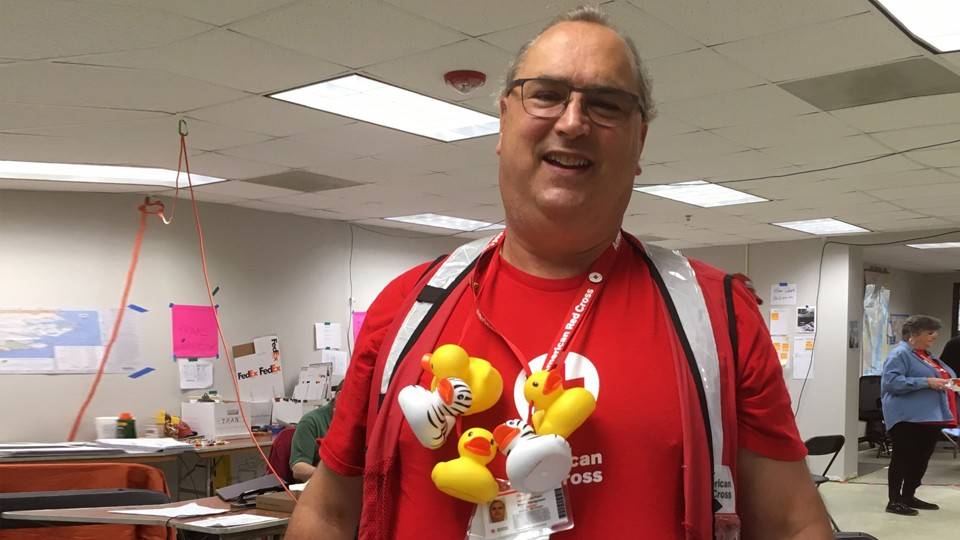 During his deployment following Hurricane Florence, Red Cross disaster spiritual care volunteer Bruce Wenigmann met a man staying at a Red Cross shelter who was battling diabetes. The man had already lost one toe and was in danger of losing his whole foot because of infection.

The two had formed a connection, and when the time came for the man to go to the hospital for surgery, Wenigmann went there to see him -- a generous act that didn’t go unnoticed.

“Many spiritual care folks could have rationalized that there are chaplains at the hospital that could care for this man’s spiritual needs, however Bruce made the trip to the hospital to visit and minister to the man,” wrote Richard McCory, a disaster spiritual care lead who worked with Wenigmann during the deployment. “This reflects favorably on Bruce and upon the American Red Cross, demonstrating an above-and-beyond commitment to our clients.”

Wenigmann appreciates McCory’s kind words, but said he was simply doing what he thought was right.

“I was little surprised because to me it’s a natural thing to do,” he said. “If we’re here to prevent and alleviate human suffering then you should be with them in that kind of situation in the hospital so they know they’re not forgotten.”

Wenigmann, a retired United Methodist pastor and chaplain who lives in Boise, spent three weeks in the Wilmington, N.C., area, visiting families in shelters and making sure their needs were met, spiritual and otherwise. He spent much of his time helping these families find resources they need as they begin the long recovery process.

Spiritual care is a relatively new role in Red Cross disaster response, added because spirituality is so important in many people’s lives. Spiritual and emotional care are critical in building people’s resilience, Wenigmann said.

He said the situation on the ground in the Carolinas is difficult – affordable housing was in short supply before and now is even harder to find following the storm – but admired clients’ determination.

“It was very difficult to place people, especially if their preference was to stay in the local area,” he said.

“It’s very very hard because they have been uprooted. But all things considered, people were holding up relatively well, but it’s tough.”

Problems that existed in these communities before become even more pronounced when disasters like Florence strike, he said.

“The disaster exposed the huge unmet needs that were pre-existent to the disaster and just how much we need to really try to address some of those conditions so it’s not so bad the next time,” he said.

Like on any deployment, things can change quickly. Partway through his deployment, Wenigmann was asked to step into a supervisory role on short notice after the previous supervisor moved on, a change that Wenigmann said was unexpected.

He didn’t miss a beat.

Florence marked the second Red Cross deployment for Wenigmann, who also went to the Florida Keys following Hurricane Irma last year. And while these deployments are exhausting for volunteers, Wenigmann said when he’s there he feels like he’s where he needs to be and gets much back in return.

“It is a painful privilege to be part of people’s lives during disaster, regardless of the scale,” he said. “I felt very honored to be part of the recovery process and learned much from our clients on how to handle disaster with grace and dignity.

“It’s part of my calling to be with people who are in crisis and who have suffered trauma, to help them come to terms with what they’re going through and to help them move forward at least with the initial steps. To know they’re not alone, that people care.”