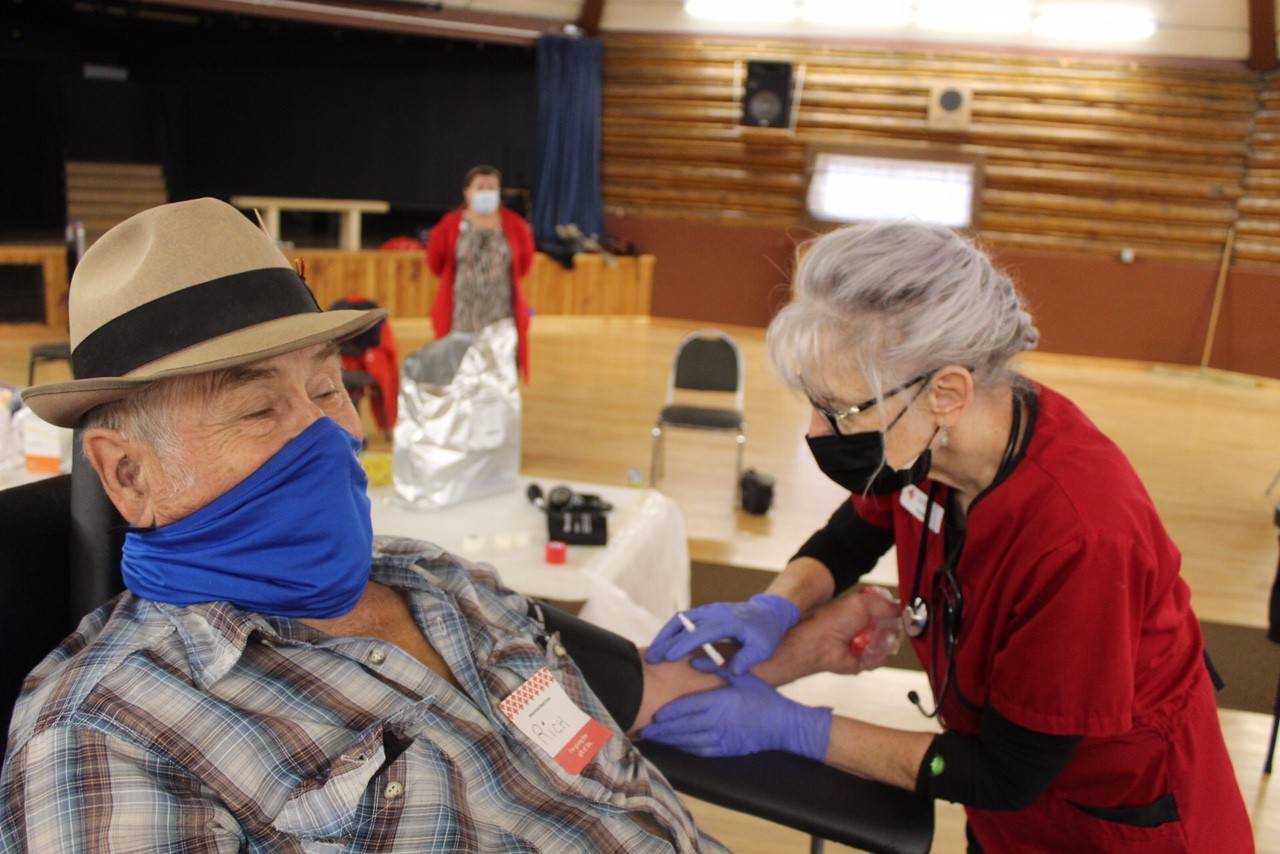 Rich Paul, who lives just outside of Lincoln, has donated blood for 60 years. “If I could do something to help somebody it’s just a gift as far as I’m concerned,” he said.

Rich Paul was at boot camp at Lackland Air Force Base in San Antonio in the early 1960s when an instructor came in with an announcement. There was girl at the military hospital who had cancer, and they needed blood donors.

“He said, ‘We’ll give you the rest of the day off if you give blood now. So I raised my hand right away,” Rich said. “It sounded like a good deal to me.”

“Hell, I got lots of blood,” he said. “If I could do something to help somebody it’s just a gift as far as I’m concerned.”

Eighty-three years old, Rich lives just west of Lincoln and donates at community drives there as often as he can. Fellow donors and the Red Cross crew know him well.

“It’s like old-home week every 60 days,” he said. “I walk in the door and a good percentage of them say ‘Hi Rich, I haven’t seen you in a couple months.”

“He gets plenty of hugs and kisses on a give-blood day,” she said. “I’ll let him tell you about that.”

Sherry Sidell is the blood program leader in Lincoln and helps organize the community drives. She said Rich is always lending his time to others, whether it’s giving blood, climbing a ladder to help paint a house or with his incredible carpentry skills.

“He’s a very amazing man and good friend of everybody in town,” she said. “He’s just got a very big heart.”

Rich spent almost 33 years as guardsman with the Montana Air National Guard and 28 years as a civil service technician with the Guard. Besides Lincoln, he’s also lived in Great Falls and has had a long list of employers including Caterpillar, the Anaconda Company, Albertsons and Riverside Machine Works. Through it all, he’s made helping others a key part of his life.

“Giving blood is kind of like walking down the street and seeing somebody who’s having a hard time and they need money or whatever and I’ll give it to them,” he said. “I’m also a good tipper.”

“It’s something that has made my heart feel good, and probably bigger, because of what I do. I’ve been that way for 60-some years.”

Blood donation has been part of his family as well. His mother was a blood donor back in the ‘50s before she got sick and needed blood herself. Rich said he dreads the day when he’s no longer able to give.

“Some days I think ‘how much longer can I do this,’ and I’m concerned about it cause I don’t want that to sneak up on me,” he said. “When they tell me I can’t give blood anymore, it’s going to hurt. It’s going to hurt my heart.”

For all he’s given others, Rich says he’s gotten back just as much along the way. That’s why he goes by Rich – and not his given name, Richard.

“The reason he’s been rich all his life isn’t because he’s got money or it’s his name,” Dawn said. “It’s because of all the people, places and things that he’s had in his life. That’s what makes him rich.”

Never given blood before? It’s time to give it a try. A donation takes less than an hour and can save more than one life. Plus, you get juice and cookies afterward. Learn more and find a blood drive near you at RedCrossBlood.org or by calling 800-RED-CROSS.