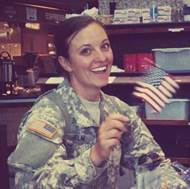 Erin Helm’s first experiences with the American Red Cross came through the blood transfusions that added five years to her father’s life.

She took Red Cross lifesaving courses, and she’s benefited from Red Cross support programs while serving in the military.

Now Erin is the new Red Cross disaster program specialist for western Montana. She works in Missoula and grew up in Fairview, Mont., and northern Idaho.

Erin also is a lieutenant in the Utah Army National Guard working in military intelligence.

Erin said she learned through her military experience and small-town upbringing that reputation and character matter more than academic degrees and accolades.

Her last job was as an anti-terrorism coordinator, which involved thinking through active-shooter responses, for example. With the Red Cross, she’ll put her skills to use coordinating logistics as the Red Cross responds to fires, floods, storms and more in western Montana.

“It’s an interesting job,” she said. “There’s so many logistics to handle and personalities to work with. I’m excited to work with all the volunteers doing such good work here and around the world.”

Erin hasn’t responded to a disaster yet but looks forward to seeing first-hand the challenges of responding to a disaster and the vital work volunteers do.

Also on her checklist is resuming blood donation. She paused
her blood donations while she had two babies recently, but she’s getting ready to start giving again.

Erin knows blood donations are a profound gift, saving the lives
every day of trauma victims, cancer patients, tiny babies and people like her father, who had myelofibrosis, an autoimmune disease in which his body attacked his white blood cells.

In blood donation and in disaster response, a simple act of kindness and generosity can have a profound impact on a person, family, and community.

Red Cross Offers Thanks to Our Supporters
.type=article.p=1
View All
/content/redcross/en/local/montana/about-us/news-and-events/news/helm-takes-reins-as-disaster-program-specialist-for-western-mont