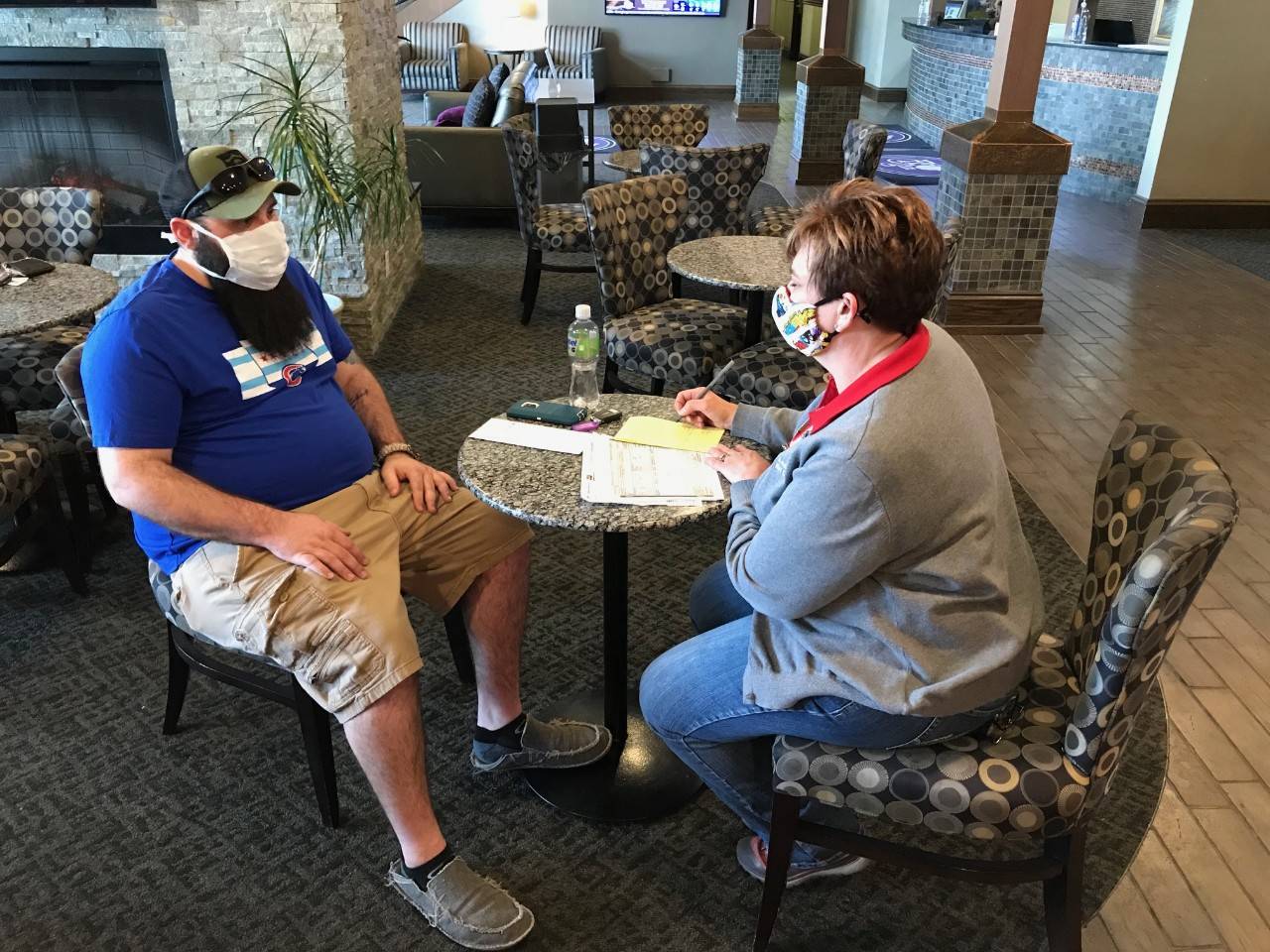 Kyle Ramon speaks with Red Cross Disaster Program Manager Shellie Creveling after a fire at the Glacier Apartments in Great Falls in April. Montana Red Crossers helped Ramon and his family get back on their feet.

Just four months after watching smoke billow out of his apartment window in the wee hours of the morning as he gasped for air, Kyle Ramon is back on his feet. The Great Falls veteran recently moved into a new house and started his own business, huge steps forward that might not have been possible without the help he received from the Montana Red Cross.

“It was a miracle. The Red Cross is a godsend,” Ramon said. “Without having that support and that room to digest and create a plan, I don’t know where I would be.”

At around 2 in the morning, Ramon had gotten up to take his contacts out when he heard his upstairs neighborhoods moving about hurriedly. The sound of a fire alarm and the smell of smoke soon followed. He rushed to his young daughter’s room and pulled her out of bed before waking his girlfriend. The hallway outside their apartment was filled with smoke and heat so Ramon broke out their window and helped his girlfriend to safety. He then handed her his daughter, before he escaped himself.

A few moments after he got out, Ramon realized his 74-year-old neighbor who is hard of hearing was nowhere to be seen. Ramon woke her, helped her find some clothing and then lifted her to safety, too.

The April fire at the Great Falls apartments left 21 families without a home, a situation made even more difficult by the coronavirus pandemic. Red Cross responders put families up in individual rooms at a local hotel, provided food and emotional support and jump-started their road to recovery. Many of those families have since returned to those apartments while others like Ramon and his young daughter charted a new path.

“My five-year plan quickly became my 15-day plan,” he joked.

Ramon said he had no idea Red Cross volunteers provide these services but is forever grateful.

“Red Cross went above and beyond what I could ever expect,” Ramon said. “It makes me happy and gives me faith in humanity. I never knew Red Cross did that much.”

Each year, Montana Red Cross responds to hundreds of disasters, most of them home fires. In July, Red Cross responders helped nine people displaced by a downtown fire in Gardiner and provided assistance to 25 people in August following a Columbia Falls apartment fire.

To help the Red Cross prepare for and respond to disasters big and small or learn how you can become a Red Cross volunteer, visit montanaredcross.org or call 800-ARC-MONT.